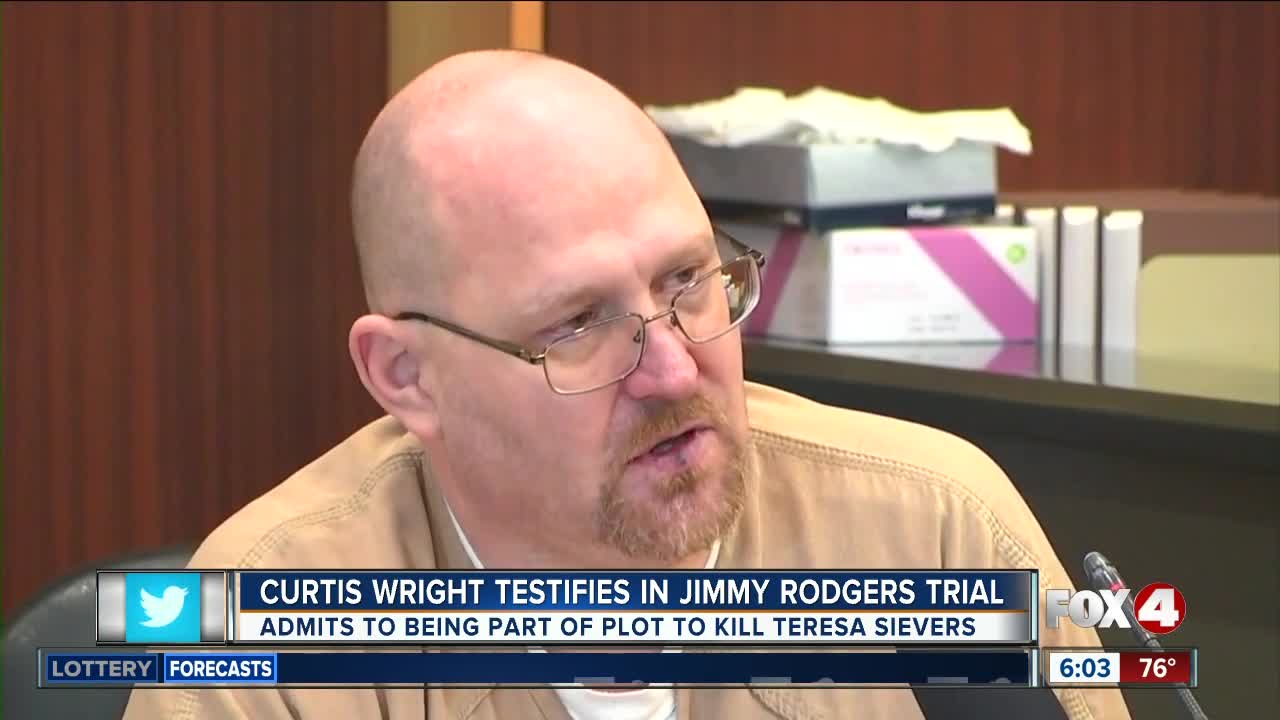 We expect to hear more on Friday from the man who says he and Jimmy Rodgers killed Dr. Teresa Sievers.

FORT MYERS, Fla. -- We expect to hear more on Friday from the man who says he and Jimmy Rodgers killed Dr. Teresa Sievers.

Curtis Wright was on the stand for nearly 3 hours Thursday. He took a plea deal in exchange for testifying against his alleged accomplice, Jimmy Rodgers. He will also testify against Teresa's husband Mark when his trial begins next month.

Wright and the State say that in 2015, Mark masterminded a murder-for-hire plot to kill his wife and collect her life insurance money.

The state didn't waste any time when Wright took the stand, immediately asking Wright: "Who killed Dr. Teresa Sievers?" Wright answered, "I did and Jimmy Rodgers."

The day of the murder, Wright says he and Rodgers checked out the Bonita Springs home to plan how they were going to do this.

He says he didn't want to actually murder Teresa himself. But Wright says he made a mistake after Teresa Sievers showed up at home earlier than expected.

"I accidentally kicked the dog dish over…she started to turn towards me. I was afraid that if she turned around she would scratch me or do something that would leave evidence. I swung the hammer and I hit her" said Wright. "After I hit her, she finished turning towards me and she put her hands up to fight back, to defend herself…she as looking at me through her arms and she said 'why?'"

That was the last word Teresa spoke.

Wright says he hit Teresa three times with a hammer. He then says Rodgers hit her repeatedly with another hammer in what he calls a frenzy.

He says Rodgers didn't stop until Wright told him to.

Wright says the pair then left the home and returned to Missouri.

Wright is expected to take the stand again Friday morning once court resumes. You can watch the proceedings live on Fox4Now.com and on Facebook.