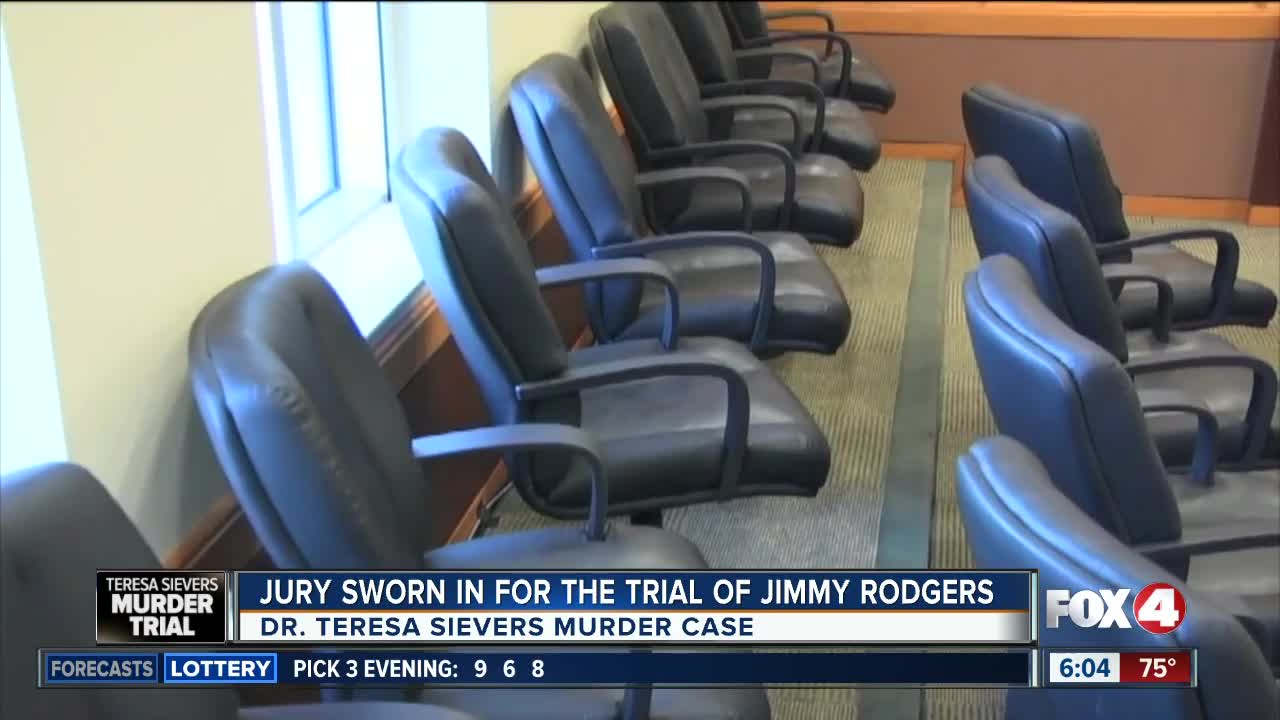 The judge swore in the 12 jurors and two alternates Tuesday. Those people will decide the fate of Jimmy Rodgers.

FORT MYERS, Fla. -- The trial for the murder of Teresa Sievers will be on pause Wednesday for Yom Kippur. But when court picks up again Thursday morning, we'll hear opening statements.

“Ladies and gentleman of the jury, you have been selected and sworn as the jury to try the case of the State of Florida versus Jimmy Ray Rodgers."

The judge swore in the 12 jurors and two alternates Tuesday. Those people will decide the fate of Jimmy Rodgers.

Prosecutors say he and another man killed Dr. Teresa Sievers in her home back in 2015. Sievers' husband, Mark, will go on trial next. He's accused of hiring the men to kill his wife.

As for the jury selection process, it took a while for prosecutors and the defense to find jurors they were comfortable with.

Phase three of jury questioning took four hours Tuesday afternoon, and we wanted to break down some of the questions each side asked.

The state asked if there's anyone who likes to watch crime shows, and if they understand what happens on television is not reality.

They also asked if anyone has ever been the victim of a crime. One said they were the victim of domestic violence. They were excused. Others mentioned car and home break-ins.

The state also asked what jurors believed are the most honorable professions. Answers included police, teachers, and doctors.

They used those answers to ask a hypothetical question: a used car salesman and a nurse both witness a car crash. The salesman was closer and says he saw exactly what happened, but the nurse was down the block from where the crash happened and told an opposite story.

They used that scenario to ask who the jurors would trust. All potential jurors agreed: the car salesman.

As for the defense, which is trying to prove Jimmy Rodgers is not guilty, some of their questions included asking who's not happy to be there. Three people raised their hands.

They also asked who thinks they are unfair and biased. One person said they might be biased because of their life experiences.

Our legal expert, Pamela Seay, says the potential jurors were also asked another very serious question. "They were asked ‘can you believe this defendant is innocent?’ And every one of them said yes, they can believe that this man is innocent."

She said while she was in the courtroom, noticed all the potential jurors were very attentive, and it was a very serious atmosphere.