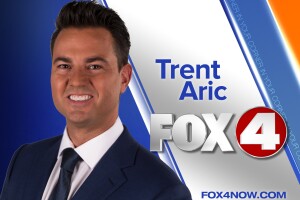 Trent Aric is a nine-time Emmy Award-winning meteorologist and the newest member of the Fox 4 Weather Team, but he is no stranger to South Florida Weather having spent the past 15 years working in the Miami/Ft. Lauderdale market at WPLG.

Trent, who is originally from Mooresville, Ind., says he's a Hoosier at heart but now lives in flip-flops fulltime. Living in SW Florida is a dream for Trent and his young son Jupiter. That’s right the weatherman has a son named Jupiter…after the Roman God of the sky and thunder!

He holds a B.A. in Communication Studies and a Certificate in Journalism from Indiana University-Purdue University Indianapolis. He also earned a Master's Degree in Geosciences with an emphasis in broadcast meteorology from Mississippi State University.

Trent was awarded the Seal of Approval of the American Meteorological Society in 2004 and was upgraded to the highest level of recognition, the CBM (Certified Broadcast Meteorologist), in 2010.

Trent began his broadcast career at WRBL in Columbus, Ga., where he was morning and noon meteorologist.

The next step was South Florida in 2004, Trent was quickly introduced to the tropics and within his first two years of working at WPLG covered two of the most active hurricane seasons ever in the Atlantic Basin. Some of those notable hurricanes were Charley, Katrina and Wilma.

In 2010, Trent and hurricane specialist Max Mayfield won an Emmy Award for their hour-long special, "Hurricane House Calls." Trent also won an Emmy for the primetime special, "Hurricane Season 2009: Get Ready" and again in December 2008 for "Goin' Green," an Earth Day special that highlighted the effects global warming could have on South Florida. "Goin' Green" also detailed practical solutions people can use in their daily lives to help reduce their carbon footprint.

Trent continued his environmental work in South Florida by volunteering his time with the organization "Dream In Green” and looks forward to helping FOX 4 with their mission of “Protecting Paradise”.

Trent loves music. During college, he performed at the Nashville Follies Musical Theatre in Nashville, Ind. for five years. He even got a taste of Hollywood when he filmed several scenes of the Paramount Pictures release "The Fighting Temptations" in both Columbus, GA and Atlanta, GA.

Trent loves spending his free time around town with his son, traveling, playing the guitar and fishing.

You can e-mail Trent at Trent.Aric@fox4now.com