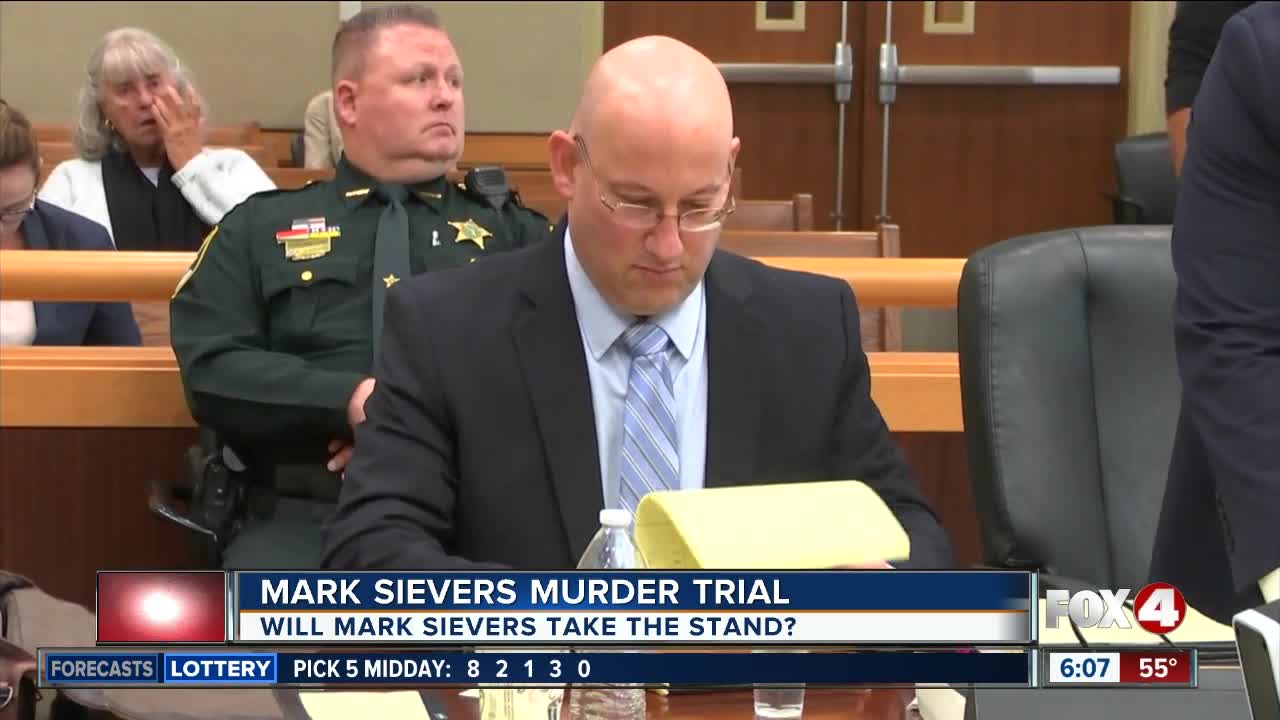 Mark Sievers has one last chance to take the stand in his own defense Wednesday. But it could be a risky decision. And we're also expecting closing arguments from both sides Wednesday.

FORT MYERS, Fla. -- Mark Sievers has one last chance to take the stand in his own defense Wednesday. But it could be a risky decision.

And we're also expecting closing arguments from both sides Wednesday.

First, some background for you: the state says Mark Sievers hired Curtis Wright and Jimmy Rodgers to murder his wife, Dr. Teresa Sievers.

Rodgers was convicted of second degree murder last month. He's expected to get 25 years in prison. Wright took a plea deal in the case.

One major moment Tuesday was when the Sievers' estate planning attorney, Monica Lyons, took the stand. She broke down an irrevocable trust she had drafted for Teresa Sievers, funded by a $2.5 million life insurance policy.

Lyons says she drafted the same type of trust for the same amount for Mark Sievers, too. She told the jury she didn't think Mark or Teresa had sufficient life insurance policies, especially Teresa.

"Teresa was one of the most dynamic people I have ever met in my entire life, working and knowing entrepreneurs, and knowing amazing people who do charitable works around the world….she needed more life insurance," said Lyons.

Teresa also had a $300,000 life insurance policy issued in 2000 in her former name, Teresa Cousins. The policy was predated before her marriage to Mark, but Teresa did change that policy so Mark Sievers was the primary beneficiary.

During cross examination, things got tense between the prosecution and Lyons when talking about how the policy was written for distributing the life insurance money.

Lyons did say she planned the Sievers estate as Mark and Teresa Sievers asked.

The big question, of course, is will Mark Sievers take the stand in his own defense Wednesday. This has come up several times during the trial, but Wednesday is his last chance to do this.

Lawyers and law experts we've spoken with say overall, taking the stand in your own defense is an incredibly risky move.

But FGCU law professor Pam Seay says in this case, it might be necessary. “Will he be able to make a good presentation of himself on the stand? So far, the jurors have only seen this maniacal, copious note-taker during the trial. Inappropriate laughter. And they’ve heard messages that don’t seem to have an appropriate kind of emotion to them. So yeah, it would be beneficial to them if they could hear him, if they could hear him say ‘I loved my wife, I didn’t want to lose her, I miss her.’”

If Sievers doesn't take the stand, closing arguments will start right away. Those are expected to last around 5 hours.