A hit-and-run crash killed Tracy Miller’s son, Adam King more than two years ago. “My baby didn’t need to die that night,” said Miller. “He had so much life left in him. He was just driving home. I miss him so much.”

CAPE CORAL, Fla. -- Hit-and-runs are a fast-growing problem across the state and in Southwest Florida.  Fox 4 has uncovered troubling statistics that put the area on the map for having the most dangerous streets in the country.

Jillian Hartmann dug deep into the alarming epidemic that has law enforcement pushing for safer roads and victims fighting for stiffer laws.

We learned in a 2016 report that Cape Coral is the most dangerous metro area for pedestrians.

"I can't walk, I've been laying in a bed for two months," said hit-and-run victim Alicia Medina.  She's at Lee Memorial Hospital recovering from multiple surgeries after a hit-and-run in May.

"I don't remember anything. All I know is I woke up 3 weeks later here in the hospital, all swollen and in pain." 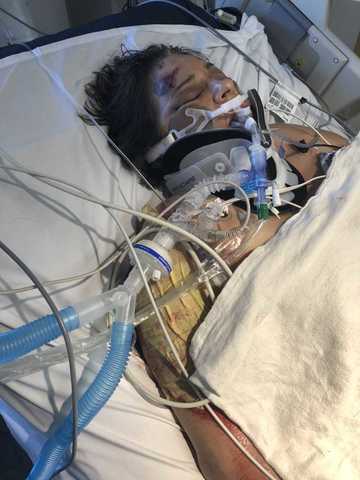 Fox 4 obtained surveillance video of the crash on Del Prado Boulevard. It shows Medina and her cousin taking a casual stroll on the sidewalk.  Seconds later, a suspected drunk driver hits an SUV, which jumps the curb and plows into both of them.

“The volume of hit and run crashes have up-ticked every year in the past several years," said Lt. Greg Bueno.

Hit-and-runs can be complicated to prosecute

Florida Highway Patrol says these crashes can be complicated to prosecute

Fox 4 spoke to an attorney who agrees.  “There are a lot of games played by defendants out there, and it's up to the State Attorney's Office on what they need to make the sanctions fit the crime," personal injury attorney Scot Goldberg said.

How to help victims of hit-and-runs

So what can be done to help people like Alicia Medina, who was dragged underneath a car tire for over 30 feet?

"Five surgeries, immobilized leg, I have no bone below the knee, dealing with that very painful,” Medina said. "It’s frustrating to spend day-in and day-out staring at a wall"

To help her get through the pain, Medina's son and sister put up cards and signs from family and friends who wish her to get better.  “Without the love from my family and friends, I don't where I’d be," Medina said.

Medina will need that support as she makes a life-changing decision. "I have two holes that have infections that have not been able to cure," Medina said.

She can either have more surgeries and more pain or amputate her right leg.  She believes losing the leg will help her move on with life quicker.

"The way I look at it now is, I made it. I'm alive,” Medina said. “I could have suffered more injuries and I didn't so this is just one piece of me and the rest of me is good."

Accepting her injuries, Medina is now demanding change to better protect others. "I would like to advocate for new legislation that ensures insurance companies should allocate for the human factor.  Because what's more important than a human being, a human life," Medina said.

Colleen Mulder is the driver charged with injuring Medina.  Police say she had a blood-alcohol level almost three times over the legal limit at the time of the crash.

She faces possible jail time.  However, like many insurance policies, Medina says the woman's car insurance only covers $10,000 to $20,000 max.

Medina is looking at more than a million dollars in medical bills.  "$10,000 does not cover a day in the intensive care unit. How is it going to account for how long this road is going to be and what the out of pocket costs will be whether or not insurance be able to support it?” Diego Medina said. “I think it's tone deaf and absolutely absurd that the minimum of bodily injury considering what a vehicle can do to a human being doesn't cover a broken limb, let know a traumatic situation."

In many cases, an injured pedestrian may have to sue the driver responsible for the accident to collect damages not covered by insurance.

If the driver has little or no assets, the pedestrians’ expenses beyond the insurance limits will go uncompensated.

“And that's substantial when you are talking about there were 400,000 crashes. You do the math. That's 25% of the time someone is leaving the scene of a crash, which is strongly discouraged and simply not allowed,” Bueno said.

Lt. Bueno and FHP are pushing a campaign called "Stay at the Scene" to reverse the trend.

“If you are involved in a crash, you are to immediately to stop your vehicle, especially if someone injured, you have to call 911,” Bueno said. “By calling 911, you can save yourself from those legal penalties if you were to leave and save someone's life."

Troopers hear all kinds of excuses from drivers who leave a hit-and-run scene.

“I don't have insurance, I had a drink, I was scared; it does not matter we do not accept excuses at that point,” Bueno said. “If you are involved in a crash, you remain on the scene."

They want you to know the penalties get steeper if you leave the scene.

For deadly cases, there's a mandatory minimum of 4 years in prison. That sentence could go up to 30 years.

Attorney Goldberg says drugs and alcohol create another complication.  If a drunk driver leaves the scene, there is time for them to sober up or to have additional drinks.

"There are a lot of games played by defendants out there and it's up to the State Attorney's Office on what they need to make the sanctions fit the crime," Goldberg said.

Fox 4 spoke with another Mom who lost her son to and crash here in Fort Myers in 2016.  She believes a new law called “Yellow Alert” is the answer.

Find out how it is used to help police catch hit and run drivers easier on this link.

Medina's son has started a GoFundMe account to help with her medical expenses.