What happens when you report a bloom to the DEP 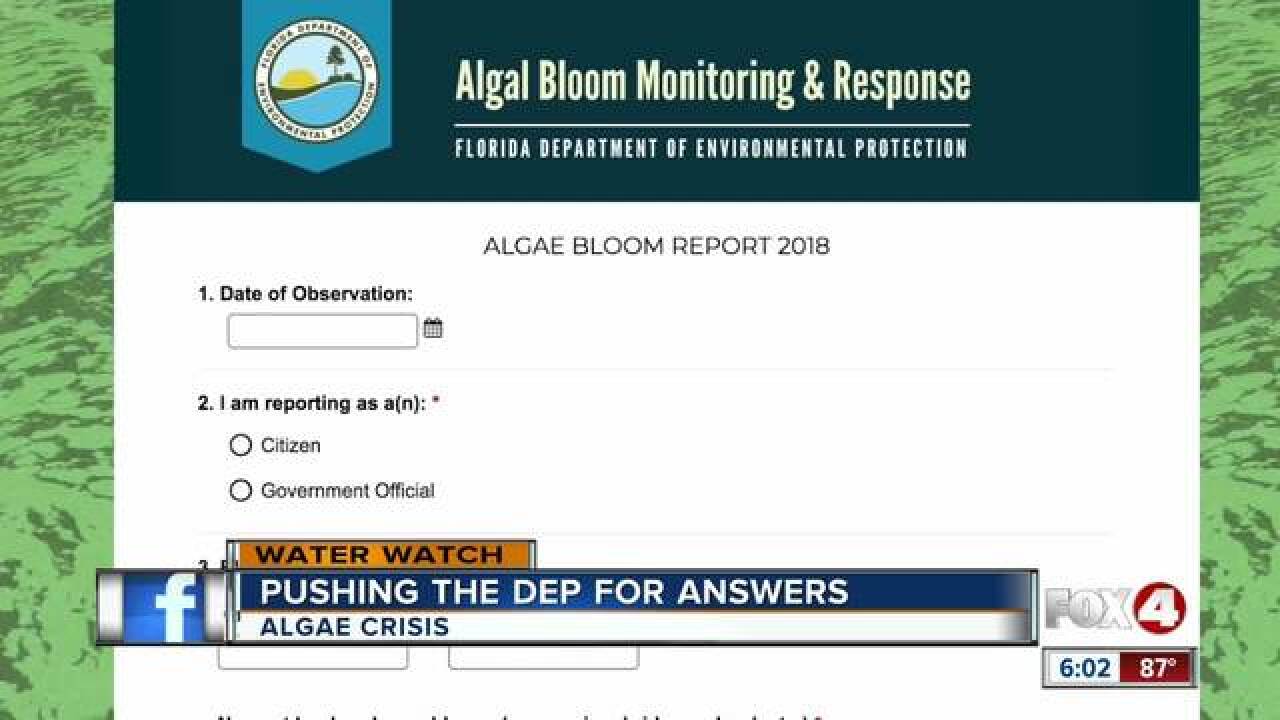 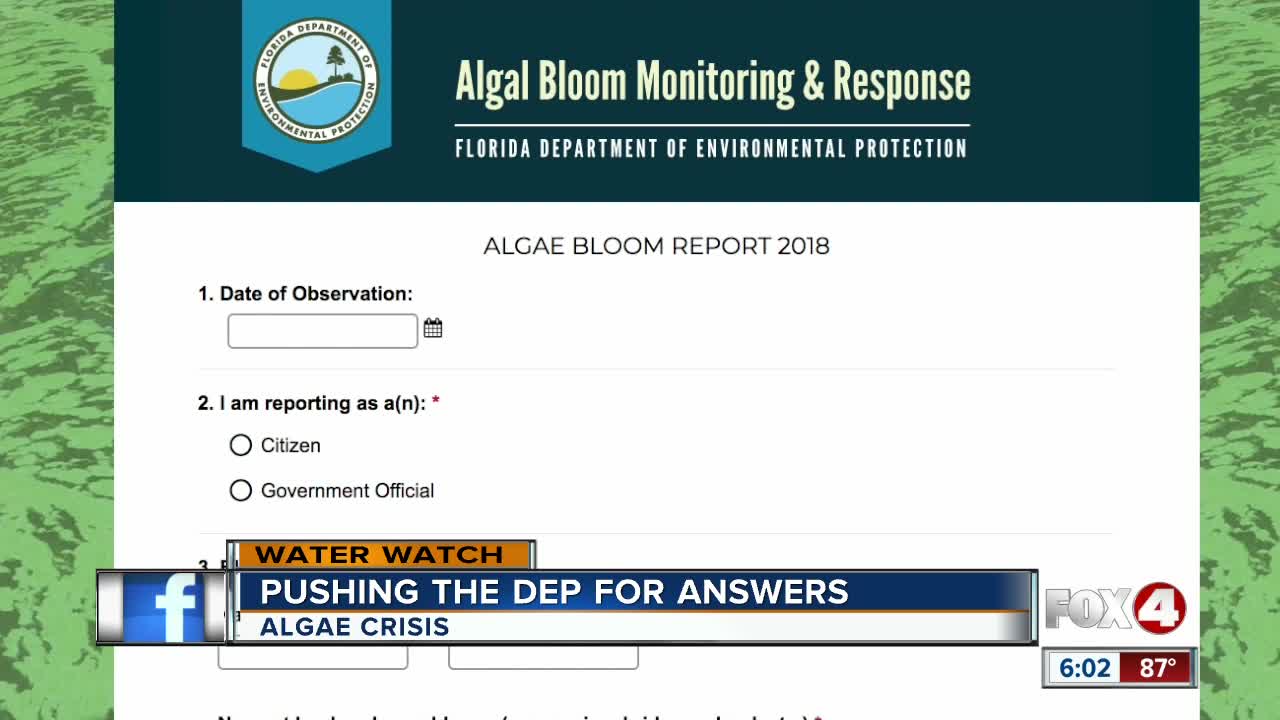 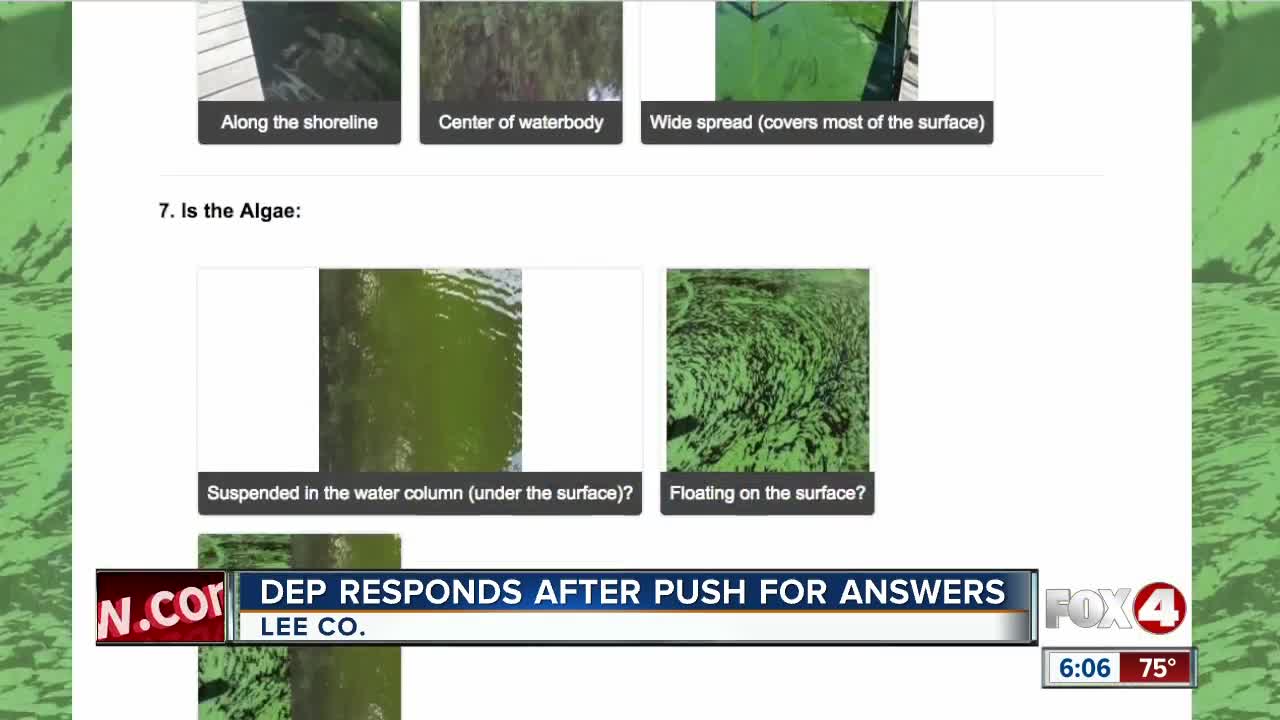 UPDATE: A spokesperson with the Florida Department of Environmental Protection provided 4 In Your Corner with the following statement in reference to a Cape Coral couple, who stated their complaint of algae blooms were unanswered:

"All reports are taken seriously and are reviewed and taken into consideration in the development of daily sampling plans. While they may not be directly notified, residents are always welcome to follow up on their report. In addition, residents have easy access to real time information, as DEP places all monitoring and testing information, including sampling dates, locations, as well as sample results as soon as they are available here: Algal Bloom Sampling Results. "

In addition, over the past two weeks, the Department of Environmental Protection says they have collected 20 water samples throughout Lee County and Cape Coral.

Steven and Dagmar Martin have been dealing with persistent algae blooms in their backyard over the last two months. The day after Governor Rick Scott declared a State of Emergency because of the crisis, the couple reported the bloom to the Florida Department of Environmental protection using their website. This was at the direction of Cape Coral City leaders. "I went online to the website to report the problem with the algae. I filled all the forms out, and sent them the exact location," Dagmar said.

However, it seems her report did not lead to any action. Now the family wants to know what happened with that information. "I didn't get any response, not even something that they received it," Dagmar said. "I would like to know what they are doing with the reports, are they working on it, are they putting it to the side?"

4 In Your Corner reached out to the Florida Department of Environmental Protection to ask if it keeps record of reported algae blooms. We wanted to know how many blooms were reported in Lee County, and what they are doing with those reports. Their response did not address those questions, but did provide deeper understanding into algae and it's connection to red tide. Read the full response below:

Among, other things the Executive Order also directed DEP to establish a grant program [flgov.com] to provide local governments with funding to contract clean-up services.

On Aug. 13, 2018, Governor Rick Scott issued Executive Order 18-221 [flgov.com] declaring a state of emergency due to impacts of red tide in Collier, Lee, Charlotte, Sarasota, Manatee, Hillsborough and Pinellas counties. This declaration was made to expand this funding to these communities experiencing red tide and mitigate its impacts.

DEP is providing funding to support of a total of $2 million for Lee County.

Currently Florida is experiencing two distinct algal blooms; one is red tide, the other is blue-green algae.

Red tide forms in offshore waters, can only survive in marine waters, and is naturally occurring in the Gulf of Mexico. Red tide begins 10 to 40 miles offshore and can be moved inshore by winds and currents.

Most freshwater blue-green algae (cyanobacteria), on the other hand, cannot grow in salty ocean water. They can be found in freshwater and brackish environments around the world. Although algal blooms are found naturally, increased nutrients (nitrogen and phosphorous) can feed the blooms. The blue-green algal blooms currently occurring in Florida’s river and coastal estuaries south of Lake Okeechobee are the result of federal discharges from the Lake, which increases nutrients and reduce salinity downstream.

DEP along with water management districts and local governments perform freshwater algal bloom sampling and the majority of these samples are processed in our nationally recognized lab in Tallahassee.DEP posts results of these sampling efforts here: https://floridadep.gov/dear/algal-bloom/content/algal-bloom-sampling-results [clicktime.symantec.com]. FWC red tide results are available from our interactive map as well.

The Florida Fish and Wildlife Conservation is the agency that monitors for red tide, and responds to reports of fish kills and other wildlife concerns. FWC publishes a red tide status report on Wednesdays and Fridays at http://www.myfwc.com/redtidestatus [clicktime.symantec.com],

The algal bloom response team takes all algal blooms seriously and all federal, state and local agencies will continue to respond as quickly and efficiently as possible to both observed and reported algal blooms to ensure the health and safety of Floridians, visitors and our natural resources.

We will continue to respond as quickly and efficiently as possible to both observed and reported algal blooms. Persistent blooms are routinely monitored and retested, and staff also regularly review satellite imagery and aerial photography, when available, to inform the development of daily sampling plans.

To help us respond as quickly and efficiently as possible, residents and visitors are encouraged to report algal blooms through the Department’s hotline or online reporting system. Information and instructions can be found here: https://floridadep.gov/dear/algal-bloom [floridadep.gov]."

4 In Your Corner again asked how many blooms were reported and what the department does with those reports. Keep up-to-date with Fox4Now.com for the DEP's response.