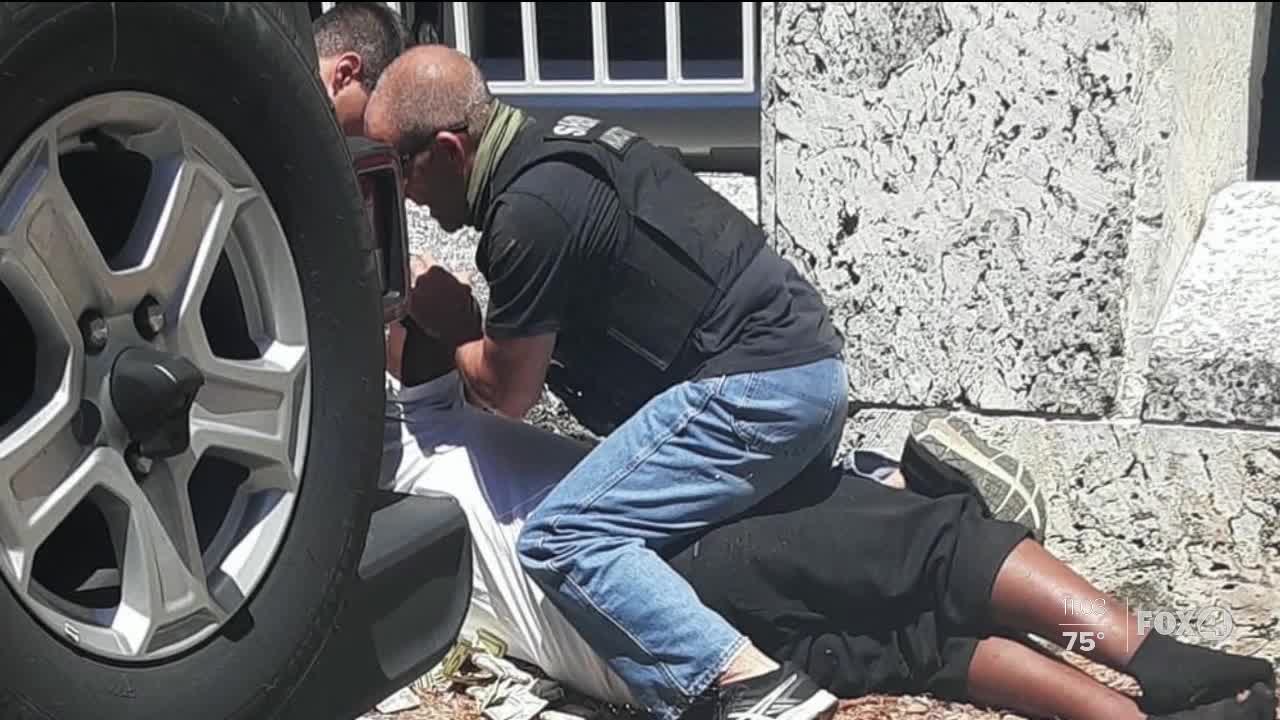 LEE COUNTY, FLA — When it comes to the arrest of 32-year-old Donavane Cody Thursday, what his family and the Lee County Sheriff's office can both agree on, is that it happened.

But that's pretty much where all agreement ends.

Cody's family says LCSO used excessive force when taking him in, during what should have been a routine check in with his probation officer.

"He looked at me and said 'I don't know what's going on,'" said Cody's girlfriend Patricia Campbell.

LCSO says they were executing a warrant for Cody's arrest, for violating his parole by driving with a suspended license.

"The man he started using profanity and said 'Don't f-ing lie on us. He said 'You know exactly why you violated,'" said Campbell.

Cody's girlfriend was there and says the shock of the arrest got to him.

"I guess he got scared and he started running," said Campbell.

His mother, Carol Cody, says he's been working to turn his life.

Once he ran, that's when Campbell says that's when things got rough. She claims after deputies got a hold of him, they tased him and then pinned him on the ground. She says one deputy had his knee near his neck. And claims that at one point Cody looked like he was unconscious.

LCSO says that's not the case.

In a statement to fox 4 they say these allegations are false. They say deputies never put any restraint on or near Cody's neck. The claim that because of Cody's "size" and "criminal past,"they were called in to help arrest him. They say they used reasonable force and brought him to the hospital to get check out before booking him in jail.

They also claim Cody's face was injured in the take down and that the mugshot being used on LCSO's website is old.

LCSO denies that claim as well.

"I know my nephew he's not an angel, but everybody's got a past," said Henry.

His family is now calling for body cam and security camera footage of the arrest to be released.

"When the video comes out, we'll know the truth," said Henry.

But LCSO tells Fox 4, they don't have any body cam footage of this incident.

Here the full statement that LCSO released to FOX 4:

The Lee County Sheriff’s Office appreciates the opportunity to debunk the completely false allegation that our detectives used improper methods to arrest Donavane K. Cody while arresting him for violating his parole.

At no time during the arrest did any LCSO detective, or any other law enforcement officer present, place their knee or any other part of their body on this suspect’s neck.

On July 22, 2020, LCSO deputies observed Cody, who was driving while his license suspended. When deputies attempted to stop and arrest Cody for driving while suspended, Cody fled from deputies, adding the offense of fleeing and eluding to the charges for which he was sought.

On August 6, 2020, a felony warrant for Cody’s arrest was issued charging Cody with parole violation.

State Probation and Parole Officers, due to Cody’s size and criminal history, believed Cody would vehemently resist being re-arrested and returned to prison, contacted LCSO for assistance placing Cody in custody for parole violation.

Cody, having just been released from prison in June, as the probation officers had feared, resisted detectives’ efforts to avoid re-arrest.

At no point was any restraint of any kind applied to Cody’s neck.

Because Cody appeared to be limp, (whether intentional feigning illness or injury, or not), appeared to be injured and was breathing without apparent effort – nonetheless, detectives, as per proper procedure, immediately arranged for Cody to be transported to a nearby hospital to be medically evaluated.

Upon arrival at the hospital, Cody responded to the routine questions posed by healthcare providers that he had never been unconscious at any time during his arrest, nor did Cody allege any injury or trauma of any kind to his neck.

Cody was medically cleared by hospital staff and transported without incident to the jail.

The video and photo provided by your station to LCSO confirm detectives used proper and reasonable procedures to overcome Cody’s resistance to arrest, and that at no time did any detective, deputy or Fort Myers Officer, place any restraint on Cody’s neck.

We are thankful the arrest of this individual was effectuated in a professional and responsible manner.

It is a sad commentary that some people, for their own selfish reasons, will attempt to foment unrest through false and malicious allegations against good law enforcement officers performing their duties properly and professional.