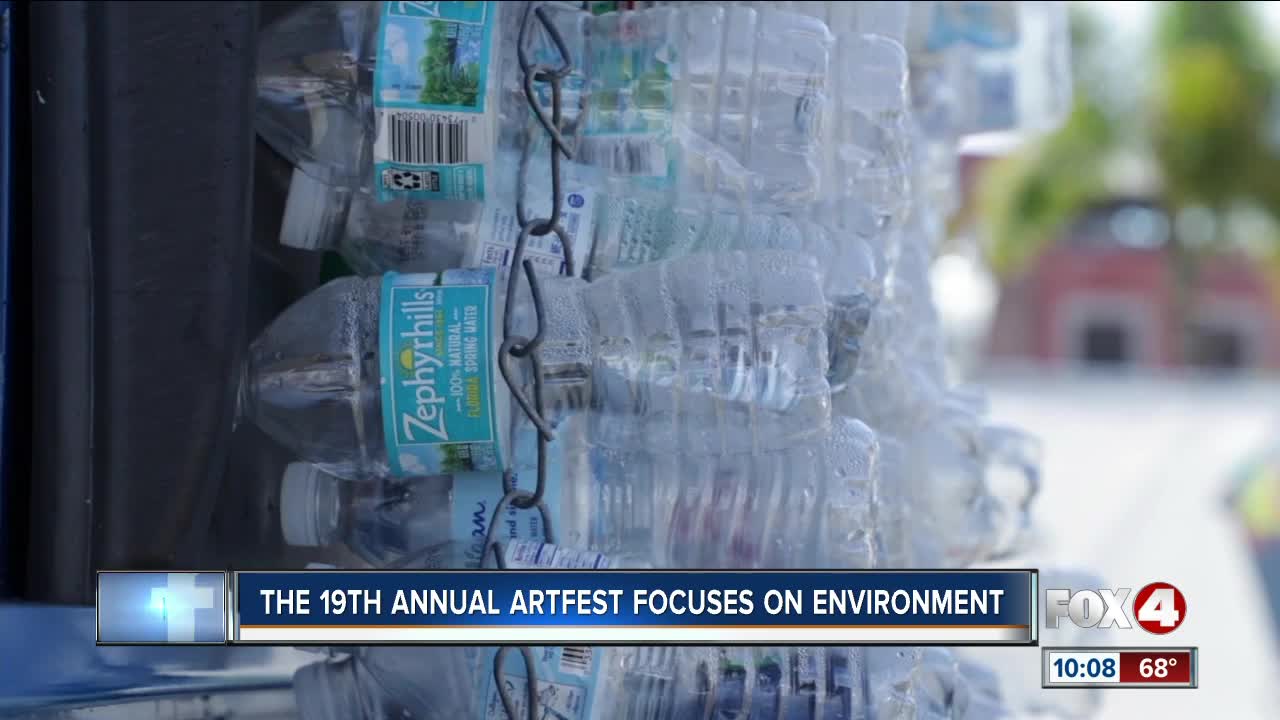 FORT MYERS, Fla. — Instead of recycling a plastic water bottle, add it to an art creation in downtown Fort Myers.

The ArtFest Fort Myers is in full swing for it's 19th year, but this time they are taking more of a stand on cleaning up the environment. Lee County Solid Waste Management came up with the idea of the exhibit "We Are Overflowing" to show the importance of preserving natural resources.

Molly Schweers, the communications specialist for Lee County Solid Waste Management, says the goal was to make more people aware of the waste getting disposed in the environment.

“The idea behind our “Overflowing” exhibit was just to let people know that our rate of trash generation is exceeding our population growth. We’re just throwing away too much,” Schweers said.

The chosen artist, Donald Gialanella, created the “Dumpster Diving” interactive exhibit made of all recycled plastic. It displays a woman diving into a sea of plastic water bottles.

"He has her diving into the unbelievable mess we have in the oceans,” said Sharon McCallister, the director of ArtFest Fort Myers.

The public can even add their own water bottle to the exhibit.

“I don’t think we should throw away our trash that can we reused,” said Shelly Ballanca, a festival attendee.

Alicia, an 8th grader at Dunbar Middle School, worked with other students to reuse old dish soap bottles and make them famous artists.

“Just created the different ones to be like art! And reusing the soap bottles to do the designs based on the artists' work and stuff like that,” Alicia said.

Schweers says this is a fun, creative way to save waste from being dumped.
Lee County had roughly 62,000 tons of recyclable material last year, she said.

“During season, we can ship out a semi-load of recycled plastic bottles each and every day. A semi-load is 40,000 pounds,” Schweers said.

She emphasizes people to value the importance of “Reduce, Reuse, Recycle”.

Below is a list of what’s acceptable to recycle in Lee County:

For more information on what to recycle, visit the Lee County Solid Waste Management’s website.