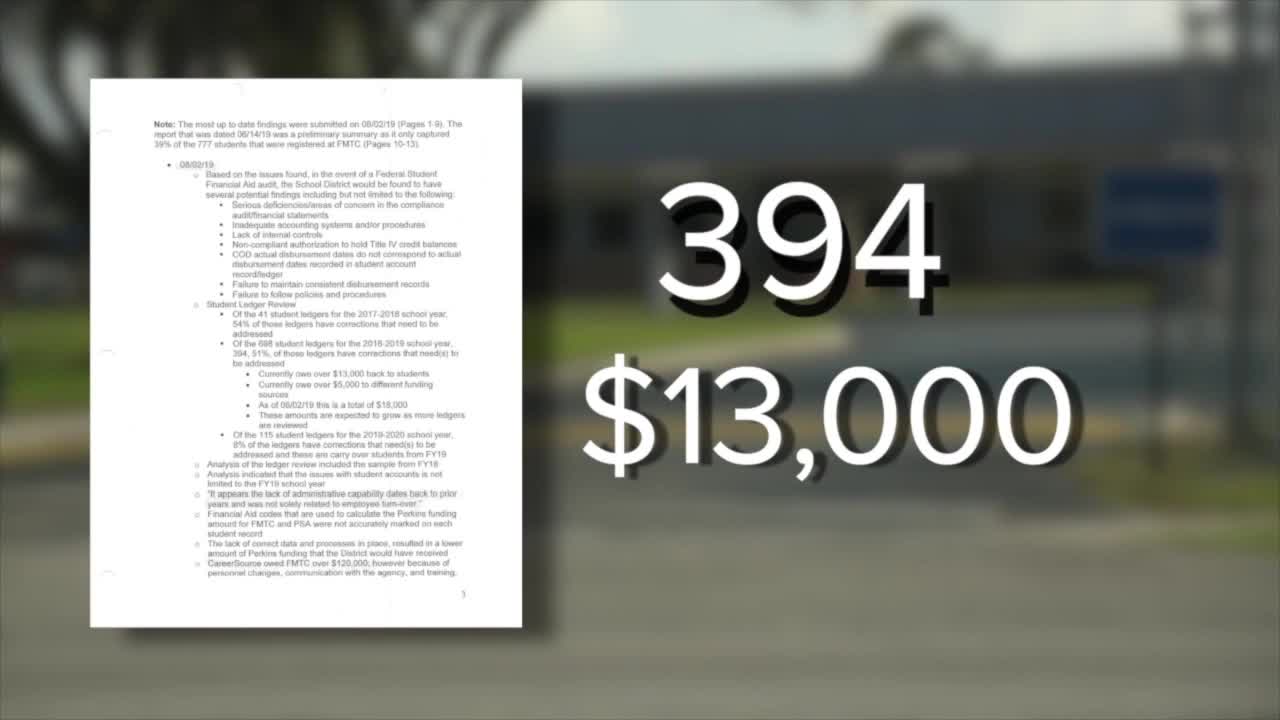 While some students weren’t getting the Pell Grants they were promised, the money may have been going to buy boats and cars instead. Pictures of license plates and purchase orders, found in the office of the former assistant principal at Fort Myers Technical College, may explain why students weren’t getting their grant money. It was all discovered when the school system conducted an internal audit in October of 2018, then followed up in February of 2019.

UPDATE 02/13/2020 11:34 A.M.: We have been contacted by Lee County Schools to clarify information in this story. The district said, while the improper purchase of boats and cars by the Assistant Principal at the time was discovered during the investigation into the mismanagement of Pell Grant funds, there is no evidence that Pell Grant funds were spent directly on boats or cars. Lee County Schools maintains that no fraud was ever committed.

“It started in October [of 2018] with our internal auditing department trying to work with them. They assured us that they had made corrective action. They had not," said Superintendent Greg Adkins, at a school board meeting last month.

At that meeting, board member Betsy Vaughn recalled a conversation she had with the former Principal at FMTC last year.

“He said we’re in over our heads. The people that I have on staff are not understanding how to do this," said Vaughn.

When auditors finally took a look at the finances, they found problems in the accounts of 394 students in the 2018-2019 school year. More than $13,000 in grant funds had not been paid out, but the account was empty. According to the investigation, they had to “borrow" $10,000 from the FMTC general fund to cover it. We emailed the school system about all this, and they responded saying, at this point, all the students have had their grant funds paid to them, but Vaughn wondered aloud at the board meeting last month about how many students may have just dropped out because they couldn’t pay.

“What about students who may have already exited the program, going back several years? Because I’m assuming we had the same staff, the same accounting staff, financial accounting staff in place for a few years?" said Vaughn.

"Well I don’t know about that. I can’t necessarily answer who was in place from one year to the next, because, as I said, there was some turnover inside that time period," responded Lee County Schools Finance Director Ami Desamours.

In October of 2019, the Florida Department of Education finally got involved, asking what had happened to the Pell Grant funds. A month later, the school board sent a response, signed by board member Gwynetta Gittens, explaining how the district was addressing the problem, but the numbers were all different. Now, instead of 394 students affected in the 2018-2019 school year, it was 77, and instead of $13,000, the number owed back to students had grown to $30,862. Desamours said all of that has been paid back, and new staff have been hired.

“There were two positions that, new positions that were provided to the college in June 2019, and that is in the section about steps taken to assist. A business process analyst and an accounting specialist that were placed there to become experts within the process," said Desamours in last month's board meeting.

Desamours said new reporting policies are now in place to provide better oversight over FMTC. As for the two employees who were investigated, both were let go, but the former principal of FMTC has since been rehired by the district in a different role. The district said it did not find any evidence that any intentional fraud had occurred.

Because the Pell Grants are federal funds, the district could be subject to an investigation by the U.S. Department of Education. The district said, if that happens, it is ready to provide any information it might be asked for.

In reporting this story, we spoke with several board members, members of the school district, and both of the men at the center of the internal investigations. None of them agreed to an on-camera interview.