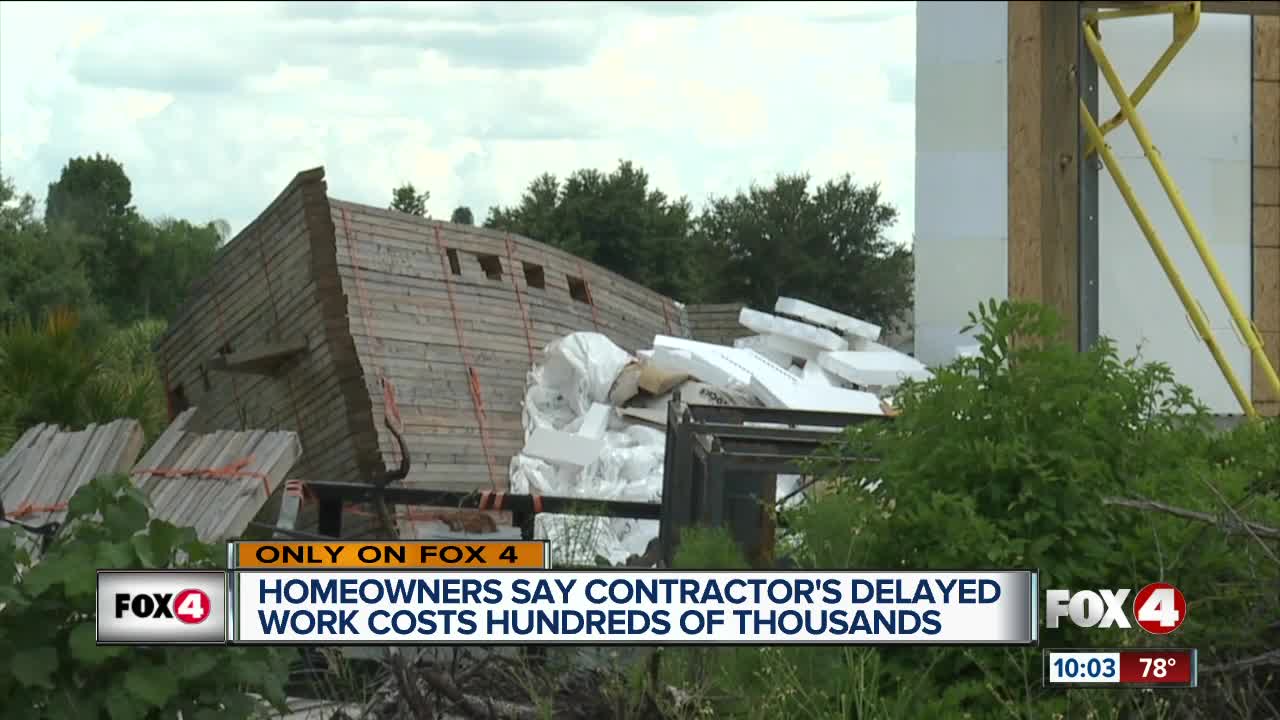 Joe Barwick said he expected a completed home from Rhino Custom Homes in November 2018, and it's still not done.

LEE COUNTY, Fla. — Joe Barwick said he expected Rhino Custom Homes to complete his Bokeelia home months ago when he paid them $120,000.

“I feel like I’ve been ripped off,” he said. “I was expecting a finished house by November.”

According to the building contract of the $129,000 home with Rhino, contractors wrote:

“Builder agrees to use its best efforts to deliver the completed residence within 120 days depending on the needs of the buyer.”

He said he signed the contract last April and said Rhino owner Mark Southwick did a good job getting the ball rolling, but after a few months, he gave him the run around.

“Same story. Oh, we’re waiting on a framing inspection. You told me that 8 weeks ago! And I’d be like, come on man, that takes one day!” he said.

The Lee County licensing website shows the permit for Barwick’s house has expired.

According to the Florida Department of Business and Professional Regulation, Southwick’s license is on probation for two years for a Fort Myers remodeling job in 2017.

The DBPR investigation states: “Respondent failed to apply for a required permit within 30 days after receiving an initial deposit amounting to more than 10% of total contract price.”

It also states Southwick started working on the property before getting permits and inspections and failed to explain the customer’s rights under the recovery fund. He’s required to pay the state $11,000 and attend licensing classes.

Southwick hasn’t responded to calls from Fox 4 as of Monday night.

Meredith Winner signed a contract with Rhino in August 2018. She said she’s paid them $50,000. A year later the house barely has a completed frame.

“This is beyond disturbing, and just not okay!” she said. “I’ve lost all trust in Rhino.”

“A week ago we didn’t even have these walls put up here,” he said. “We’re tired of this dragging on and on. There’s no reason for it.”

A pile of wood has been sitting in front of WInner’s home for nearly two months. And because of all the rain and weather, the color’s starting to fade. Winner and Thompson said they don’t want it anywhere near the property.

“They’re not putting those trusses up on this property. They’re just not going to do it,” said Thompson. “That wood’s no good and we’re not going to accept it.”

“They were for skylights that were going to be delivered here. But unfortunately, there’s no skylights in our plans for this property,” he said.

“At this point, I don’t know if he’ll ever finish or not,” he said.

Barwick reached out to another contractor who estimated completion to cost another $25,000. That’s more than double his balance due to Rhino.