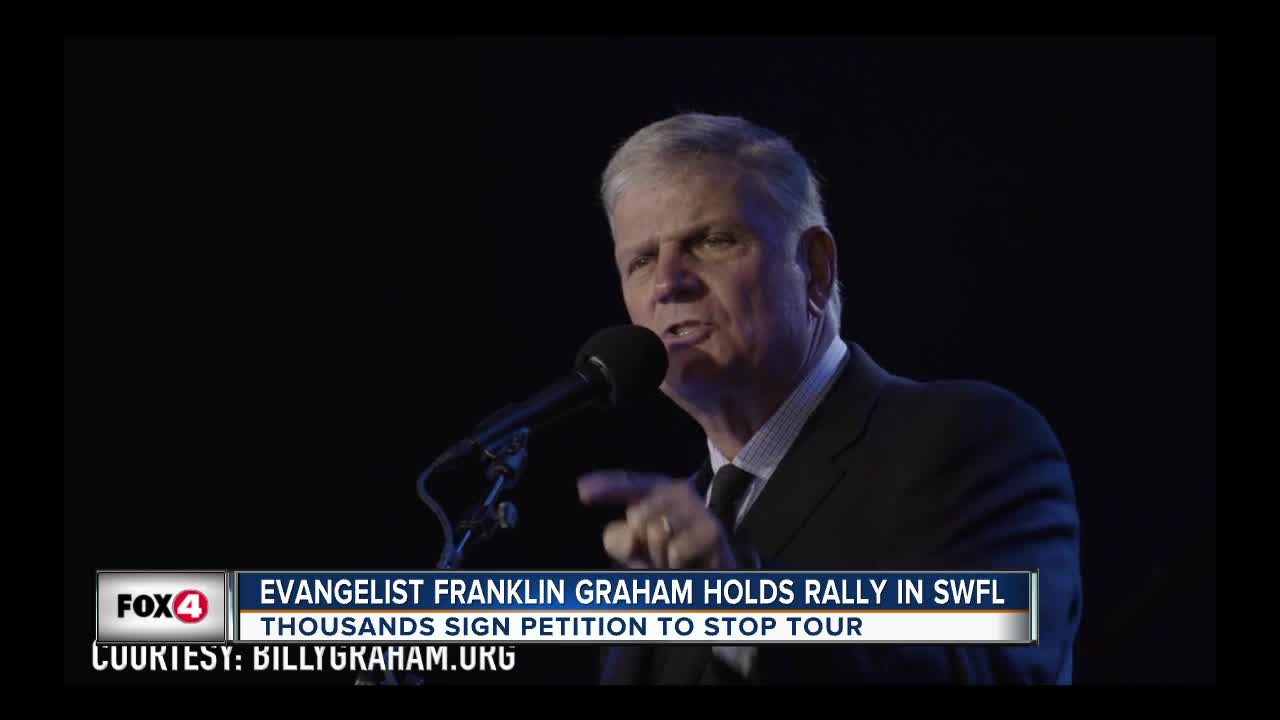 He's the son of the late reverend Billy Graham, who was counselor to both Republican and Democratic presidents. But unlike his dad, Franklin Graham is not an ordained minister, and has a very political message.

ESTERO, Fla. -- Followers of Franklin Graham gathered at Hertz Arena Sunday to hear him speak. He's the son of the late reverend Billy Graham, who was counselor to both Republican and Democratic presidents.

But unlike his dad, Franklin Graham is not an ordained minister, and has a very political message.

Graham had a full house inside Hertz Arena, making a stop on his Decision America Tour, in which he travels the country spreading the gospel like his father, evangelist Billy Graham.

However, many disagree, saying they believe his message is more politically driven, aligned with his support of President Donald Trump.

Nathan Empsall and thousands of members from Faithful America have signed petitions in hopes to stop Graham from speaking in certain arenas, saying his message is not the word of God. "Faithful America’s Christians believe very little of what Franklin Graham says actually resembles Jesus Christ’s instructions to love our neighbors as well as love our enemies. Graham has supported the president’s march to war in Iran while saying he worships the Prince of Peace, and he engages in repeated hatred to the LGBTQ community, despite the fact that each and every person is made in God’s image.”

One supporter disagrees, saying his message is direct. "I don't think he was being political or endorsing any certain venue. He gave a good message, good music about the lord Jesus Christ and being saved,” said Richard McGinnis.

He added that petitions like the ones trying to stop Graham is simply wrong. “People can petition and have their own opinion, but sometimes when they get in your face or try to keep you from doing what is you God-given right and freedom, that's not correct.”

Another supporter says Graham has a great message but he tends to highlight political figures often.

"The only negative that could scare people away is potentially him being a big fan of Donald Trump, and now people aren't going to hear the gospel. But I think his message is on point,” said Joe Davis.