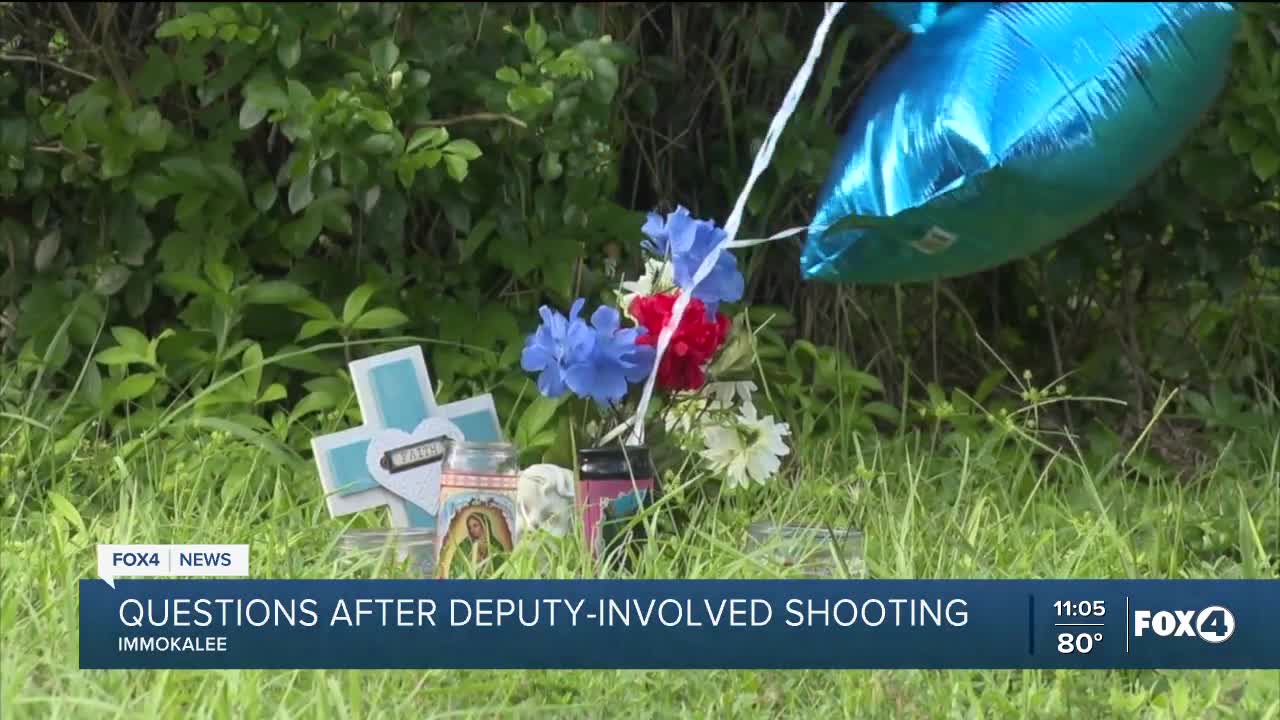 A community left with many questions after a man who didn't have a gun was shot and killed by a Collier County Sheriff's Officer.

An emotional outpouring Friday in Eastern in Collier County as loved ones gathered around a vigil for a man fatally shot during a deputy-involved shooting.

Community members say they are left with many questions on what exactly unfolded Thursday morning after a Collier County deputy fatally shot 37-year-old Nicholas Morales-Bessania.

An Immokalee farmworker and father of a 13-year-old boy.

"He was a peaceful man, a hard worker, who took care of his son, he was a widow," said Yola Martinez, a close friend of Morales.

According to the Collier County Sheriffs Office, deputies responded to a disturbance call in Immokalee's Farm Worker Village at around 1 a.m.

Dispatch - "is he still at the front door?

Caller - "Yes, and he keeps yelling for us to open the door.

When deputies arrived, they say Morales was holding a shovel and a sharp-edged weapon and refused to put them down.

Deputies say Morales then advanced towards them, leading to a deputy to fatally shooting Morales.

In a statement, the Coalition of Immokalee Farmworkers said:

"An officer entrusted with the power over life and death by the state, armed with lethal force and backed by several fellow officers, also armed, took mere seconds to analyze a fluid situation and determine that a lone man posed such a threat that he had no choice but to take his life."

Loved ones are left asking why things escalated to deadly force.

"The whole community knew him, anyone you ask will tell you good things about him; he never caused problems."

"What people need to understand is that if a person is armed with a shovel, a sharp object, those are considered deadly weapons," said Thomas.

"If an officer feels that he or she is in danger or that person is a threat to them or a threat to another person, then they have the right to use deadly force."

A big question at Friday's vigil was why didn't deputies use another method to control the situation, such as a taser.

"In that situation, a taser is not necessarily the right weapon because that taser doesn't always work," said Thomas.

"There's so much involved in that, that you really have to look at the reports and lay out the schematics to figure out what was going on."

Thomas also says law enforcement officers are trained to stop the threat, and generally, what that means is shoot the torso of the body.

"The idea is if you shoot here, you hit major organs, the bleeding stops them, and then the deputies job is to go render first aid," said Thomas

Loved ones now calling on the sheriff's office to release any video footage or audio recordings of the incident, and are demanding a thorough investigation.

"They didn't kill an animal; they killed a human being," said Martinez. "I want justice for this man and this young child that is left without a dad."

The Collier County Sheriff's Office says they don't have body cameras but are in the process of evaluating options, and any dashboard camera videos are part of the active investigation.

Deputies say a criminal and administrative investigation is being conducted into the shooting.