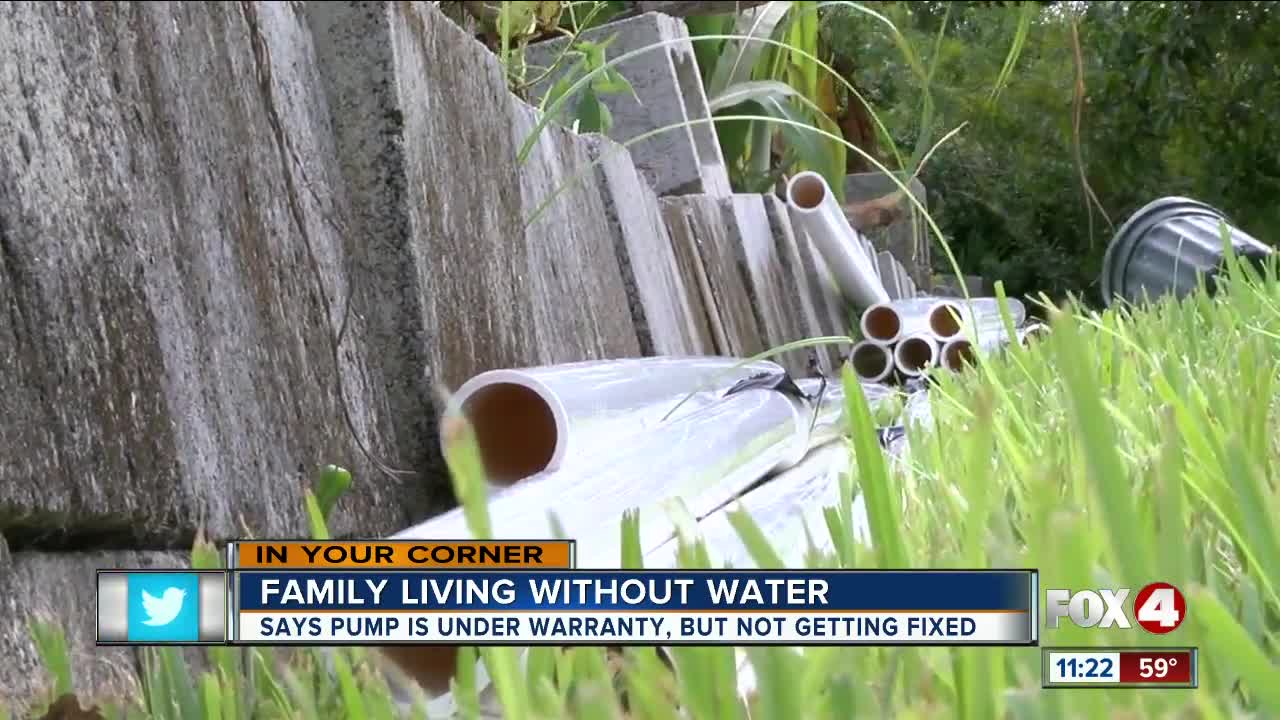 CAPE CORAL, Fla. — A cape coral family has been without water for nearly a week.

They've been going back and forth with the contractor, Water Medic of Cape Coral Inc., after they were asked to pay more than a thousand dollars to replace their water pump that is still under warranty.

Fox 4 spoke with the family about how they’ve managed thus far.

The homeowner and his son say their water pressure has been low for weeks, but it wasn't until recently that they found out their entire water pump needed to be replaced.

There are now eight people living in the Cowell household, including two 7-month old babies.

This week without water has been pretty hectic for the entire family.

The homeowner Vivion Cowell says they have now been forced to borrow water from the neighbors.

“It is so bad, I had to go to my neighbor with a bucket, to get water to flush my toilet,” said Vivion Cowell.

After going back and forth with the company, they have been given different options for water pumps that range from $300 to $1,300.

“They want a thousand dollars from me, and they won’t get that. It’s under warranty,” says Vivion Cowell.

“We’re being presented with three options to spend even more money with them,” said the homeowner’s son, Chris Cowell.

We reached out to Water Medic Inc, and got a response from the owner Richard Jackson, who’s been in the water industry for over twenty years.

He says that there has been a lack of rain this season, and water levels have been low causing water pumps to become overheated.

“We gave them three options, offered in house financing. I don’t know what else I can do for the guy. We are more than happy to fix it, as soon as they make a decision on what they want to do,” said Richard Jackson.

The owner of Water Medic says they’ve only been in contact with the homeowner’s son, and that they understand that water is a necessity for any household and want to get this situated as soon as possible.

The homeowners say they refuse to spend any more money, fixing something that is under warranty.

Fox 4 will stay on top of this to see how it all pans out.