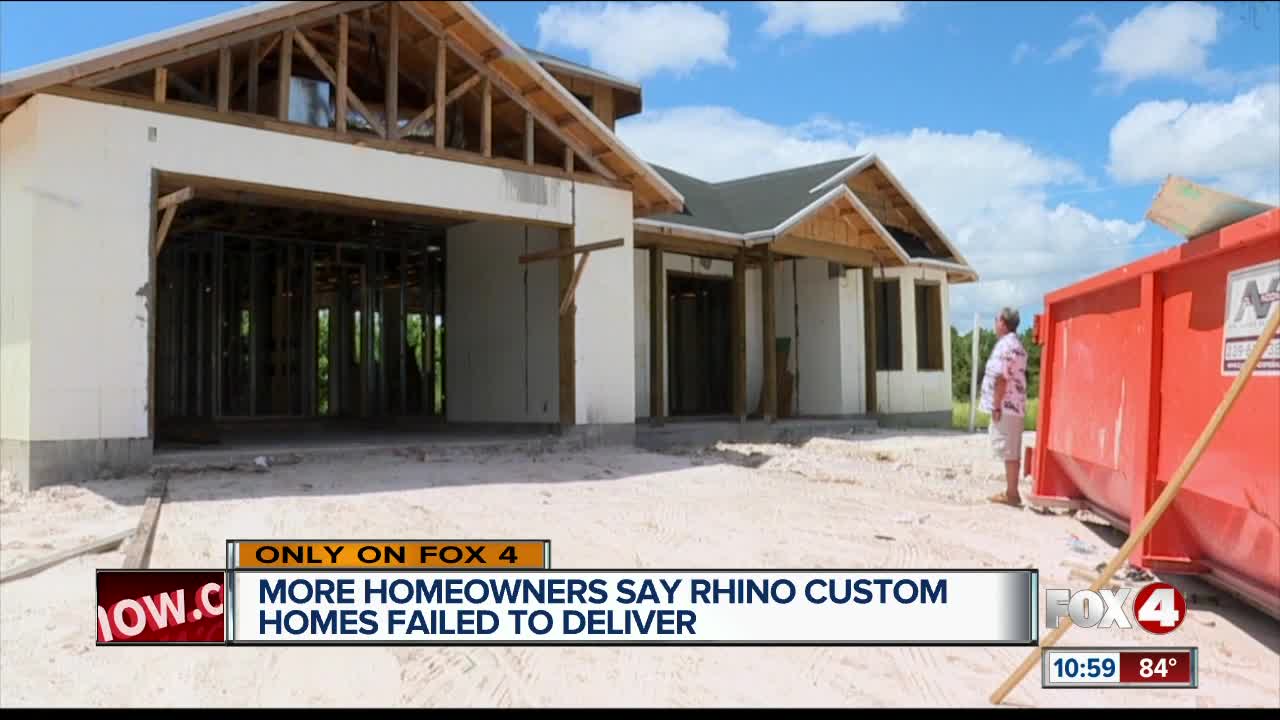 Several homeowners said Rhino Custom Homes either failed to complete their homes by deadline or did a poor job.

CHARLOTTE COUNTY, Fla. — David Haas was recently diagnosed with prostate cancer and expected to move into his brand new home in September, but he said Rhino Custom Homes is nowhere near done.

He lives in Lakeland, Fla. but planned his schedule around his move.

“Now I’m having to drive two hours to come down to see doctors,” he said.

He said he’s fed up with Rhino owner Mark Southwick giving him the run-around. He signed his contract last August, and Southwick told him in a text Haas and his wife could move in this month, but the home still needs finished walls, roofing and windows installed.

“He won’t give me any answers. He’s always got excuses on what’s going on,” he said.

Haas decided to come forward after seeing Fox 4’s coverage of Rhino prolonging other builds. So did Nicole Hummel who signed a contract with Rhino in April 2018.

She met with Fox 4 at Haas’ build and said she’s been living with her in-laws since the contract began.

“We’ve been there for a year and we want to get out of there and get into our own space,” she said. “Our home is probably a couple weeks away from being completed.”

But, she said that couple weeks has dragged out for months.

“They’ll do one day of work, and then we won’t see anything for a week,” said Hummel.

So, like other homeowners, she filed a complaint with Charlotte County. The Construction Licensing Board confirmed to Fox 4 that they are investigating at least one complaint against Rhino Custom Homes.

Rhino has completed several homes. Dennis Lawrence moved into his Punta Gorda home last month. But he said now that he’s in, so many things are falling apart.

“Where to start,” he said with a sigh. “Doors that don’t shut. Drawers that when you pull them out, the sides fall off and the door falls apart.”

Even though Lawrence has moved in, he said he’s concerned his lanai windows aren’t impact rated. Meaning he won’t feel protected when the next hurricane hits Southwest Florida

“I have impact windows everywhere except for the lanai. There’s no impact doors. They’re regular glass doors,” he said. “So, they installed a fabric system. I’ve tried to install it twice, and both times the anchors fall out of the wall, the screws come out.”

In response to the homeowners’ complaints, Southwick’s attorney sent the following statement on behalf of Rhino:

Rhino homes has committed to complete every customer’s home to the highest quality. We understand that there have been some delays and unforeseen situations, however , we are not going anywhere and intend to fulfill our commitments for homes that are high quality and the best value around for all of our customers.

We would love the opportunity to be more detailed and do a thorough investigation of any and all concerns of our customers so we can resolve them in the best interest of our clients.

Hummel - final inspections have begun and the house should have a certificate of occupancy this month.

Dennis Lawrence - has a problem with shutter system prior to hurricane and made sure someone was out there to correct the next day before the hurricane may have hit. We are awaiting items that we requested from the customer and the repairs can be completed quickly upon receipt.

North Port - inspections have been challenging we admit with the city. There were also unforeseen weather delays. We understand their frustration with the various delays and will continue to see what we can do to advance completion of this project.