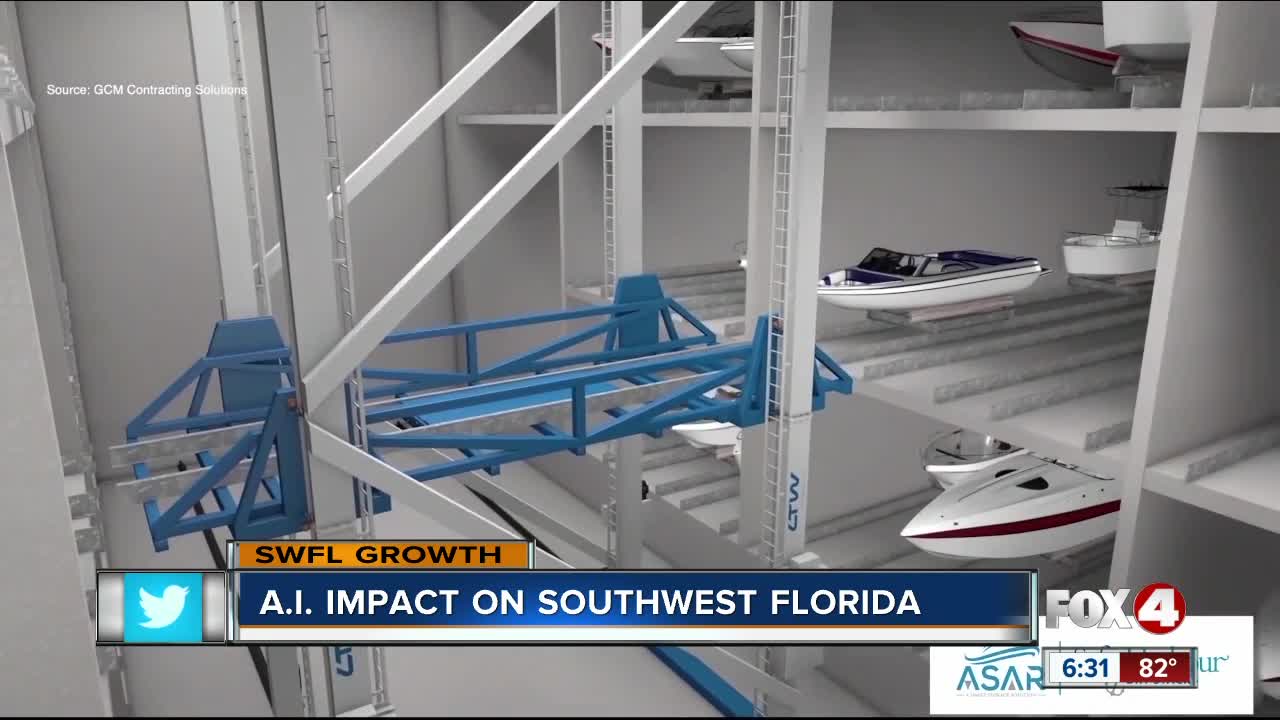 While Silicon Valley is known for being a hub for technology, Southwest Florida continues to attract businesses focused on the future. We’re even seeing how automation will soon send a big wave crashing through our boating industry.

“The United States must train current and future generations of American workers with the skills to develop and apply Artificial Intelligence technologies to prepare them for today’s economy and jobs of the future.”

Artificial intelligence, automation and technology in general has impacted our lives in various ways.

While Silicon Valley is known for being a hub for technology, Southwest Florida continues to attract businesses focused on the future.

We’re even seeing how automation will soon send a big wave crashing through our boating industry.

Next year, Gulf Star Marina will open our area’s first ever SMART Marina. Using automation developed by ASAR and a partnership with GCM Contracting, the new technology works like a vending machine for boats.

Todd Carroll, Owner of Gulf Star Marina, and his daughter, Ashley Davis, gave us a tour of the construction site on Fort Myers Beach. That’s where the new unit will open its doors in 2020.

Carroll’s been in the marina business for over 35 years. The new building will replace a previous metal unit.

Using an app on your smartphone, you can notify the marina that you’re heading over for a day on the water. Once the system receives the details of your visit, it gets to work.

An automated crane locates and retrieves your boat. Carroll says current, traditional systems that use a forklift operator for the same process usually take about fifteen minutes. He says with the use of the new automation, it takes about 7 minutes - almost cutting that processing time in half.

But the system is more than automation.

It utilizes artificial intelligence, too.

The technology keeps track of how frequently boats within the unit are used.

If data shows that some boats are hitting the water more often than others, it will rearrange them to ensure that those used more often are stored towards the front of the unit.

The operation is completely automated, and humans cannot be inside of the facility that houses the actual automation in an effort to ensure everyone’s safety.

Developments in automation like this one often cause concern when it comes to job retention.

Though the automation will no longer require the forklift operator’s skills, it still requires the manual skills of a human to completely get a boat off of the rails of the automated crane and into the water.

“The fella that operated the forklift is going to be operating the very end of the automation here,” Carroll explains.

As the boating industry in our area anticipates new usage of automation and artificial intelligence, FOX 4 reached out to local professionals about the expansion of technology and its impact on jobs. One expert told us that tech gains impact multiple industries, including some that you might not have previously considered.

“Automation and robotics are entering the white collar world.”

He says two of those industries include banking and investment management.

He explains how they’re using automation and artificial intelligence to assume repetitive back office practices.

“The technology is there from a robotics perspective to be able to do that much quicker, with many fewer errors and with a lot less people,” Smythe says.

Smythe also says that increased minimum wages have made automation a viable option for many companies.

Though he’s clear that technological advances will cause job shifts and eliminations, Smythe encourages professionals to prepare for the future now.

“You’ve got to be proactive not reactive. Technology changes too fast for us to be reactive. I think that’s the big moral here is to get out in front of it.”

That’s a notion Career Source Southwest Florida Director of Business Services Peg Elmore supports. She urges job seekers of today and of the future to plan ahead.

The non-profit received a grant from Career Source Florida that allowed them to partner with the Southwest Florida Regional Technology Partnership to assess the type of certifications new hires or existing employees need to quality for certain jobs in our area. The grant also provided funds for the training that also allowed job seekers to attain certifications for jobs in high demand.

Elmore suggests “informational interviewing”. That concept encourages job seekers to consider a career path and explore it by interviewing professionals currently in that field.

If you’re a current tech job seeker or student, here’s a local (free) event that you might consider attending.