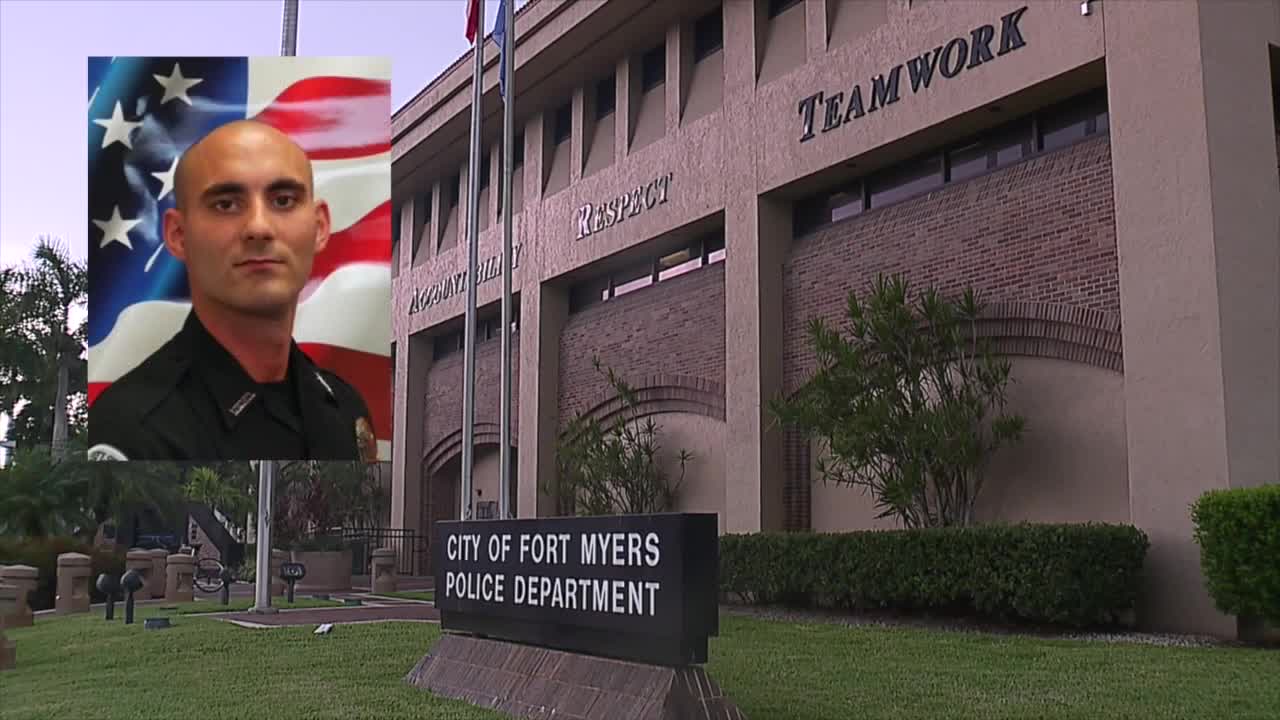 To honor his memory, his career, and all he sacrificed, Fox 4 interviewed two people who knew him best -- two of his Sergeants. They were his supervisors, but more than that, they were his friends.

On July 21, 2018, Fort Myers Police Officer Adam Jobbers-Miller was shot in the line of duty. He was responding to a call on Flint Drive off MLK Jr. Boulevard.

It was 7:33 PM. The incident report says the suspect took Adam's gun from his holster and shot him -- an injury that would take his life one week later. On July 28, 2018, at 5:14 p.m., Officer Adam Jobbers-Miller took his last breath.

To honor his memory, his career, and all he sacrificed, Fox 4 interviewed two people who knew him best -- two of his Sergeants. They were his supervisors, but more than that, they were his friends.

"Adam died doing something he loved to do," Sgt. Domonic Zammit said.

"I want everybody to remember Adam as a hero," Sgt. Glenn Eppler said.

Their office at Fort Myers Police headquarters is covered in photos and mementos of Adam.

"We all did the best we could to save Adam. We lost him," Sgt. Zammit said.

"It was tough," Sgt. Eppler said. "It's tough for me to talk about. I have a tattoo of his badge number on the inside of my arm, so I'll never forget."

Sgt. Zammit said in the day-to-day at FMPD, they find a way to honor him.

"We have particular sets of seats each officer sits in every single day. No one’s allowed to sit in that seat because that’s the absence of Adam. That seat remains empty during our briefing," he said.

Sgt. Zammit's favorite memory of Adam was back when he was Adam's Field Training Officer.

"After the second day, we were really close," he said.

He clearly remembers his last day.

"When I told him he was free to leave as a Fort Myers Police Officer. The smile on his face radiated because that's always what he wanted to do," Sgt. Zammit said.

"A couple years ago, I was getting ready to move, and I asked if anybody needed a lawnmower. And Adam says 'Hey Sergeant, I'll buy it from you.' I go out to his property and look around, and he's got acres of property. And I'm like 'What are you going to do with this mower? You need a tractor to mow all of this!' he said 'Oh, I'll find a place for it, whatever.' I later learned that Adam didn't need the mower. He bought the mower from me because nobody offered to buy it. So, he felt bad. And that's the kind of guy Adam was," Sgt. Eppler said.

"He's a warrior. He's a great cop. He's a loving son. Fiancé to Jamie. He was going to be Anthony's stepfather. And we'll never forget him. We love him and we miss him," Sgt. Eppler said.