Beta Continues to Weaken Over Texas

Beta Continues to Weaken Over Texas 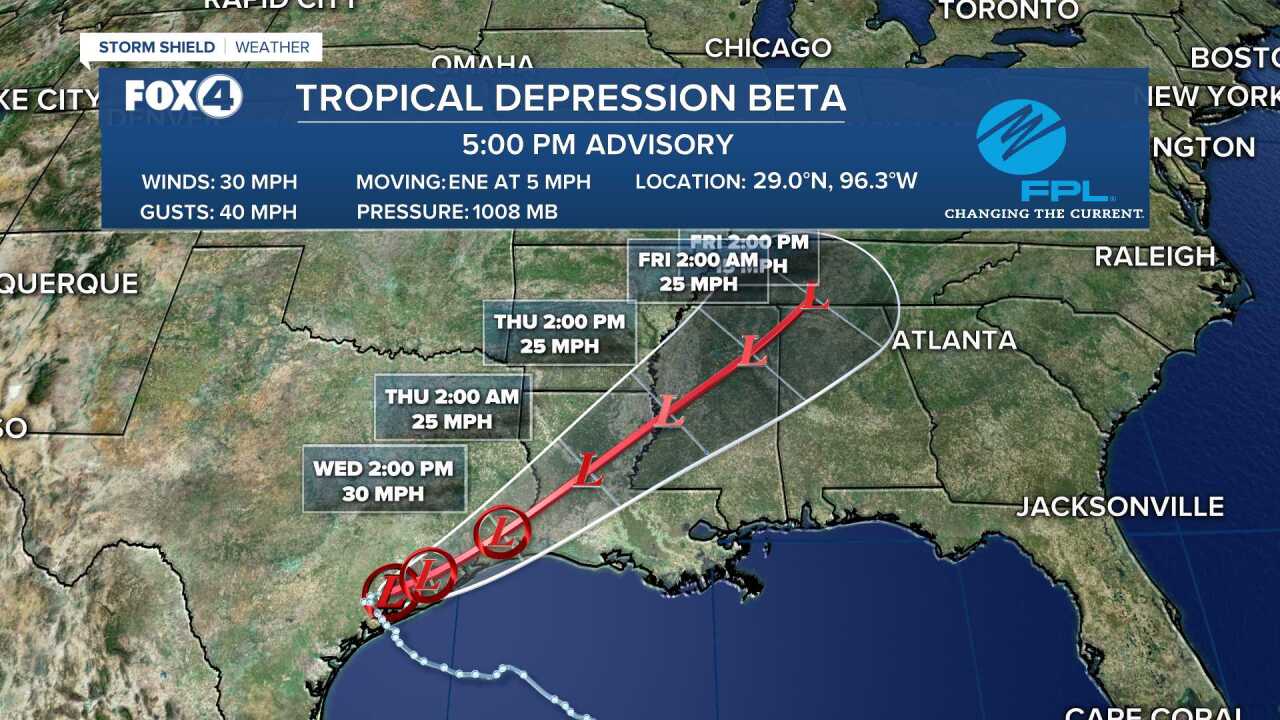 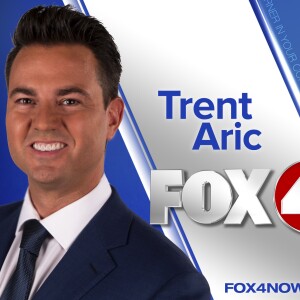 Beta continues to weaken this evening with very shallow convection. But, heavy rainfall is still falling especially near Houston which has seen as much as 14" of rainfall so far. It is forecast to remain inland as it weakens to just a remnant low later tonight. Movement is expected to be ENE slowly.

On the current forecast track, Beta will move NNE slowly over southeastern Texas & into Louisiana & Mississippi through the next four days.

Maximum sustained winds are near 35 mph with higher gusts. Little change in strength is expected the rest of the day.

Beta makes landfall. Here is the official statement from the National Hurricane Center:

Beta is continuing the saga of slow-moving storms this season as it inches closer to the Texas coast. It will make landfall tonight with heavy rainfall continuing on the central Texas coast. Winds remain around 45 mph with higher gusts and a central pressure around 999 mb.

Tropical Storm Beta has weakened today but is expected to move inland over TX later tonight. Conditions will not be favorable for it as it stalls just inland for the next 12-24 hrs. Since it is such a slow-mover, heavy rainfall is possible along the coast & spreading inland into the Arklatex.

Beta will inch closer to the coast today bringing a threat for rain, tropical storm force winds and isolated tornadoes. Flooding will be the biggest threat with up to 15" possible in some areas.

Beta is expected to produce Tropical Storm conditions over portions of the Texas coast later this morning.

Maximum sustained winds are near 50 mph with higher gusts. Little change in strength is forecast before Beta reaches the Texas coast. Weakening is anticipated once Beta moves inland.
Tropical storm force winds extend outward up to 175 miles from the center.

NOAA buoy 42019, just northwest of the center of Beta, recently reported sustained winds of 40 mph and a gust to 47 mph.
The estimated minimum central pressure is 996 mb.

Not much has changed with Tropical Storm Beta as its wind is 60 mph. It is still moving to the WNW at 6 mph and will continue on that track for the next couple days. It should make landfall Tuesday along the Texas coast and a trough will steer Beta to the northeast from the middle to the end of the week. Strong wind and several inches of rain are expected along the Texas and Louisiana coasts as tropical storm and storm surge warnings continue to be in effect for parts of the Gulf coast.

Tropical Storm Beta hasn't changed much in strength and movement over the past few hours. It still packs wind of 60 mph and is moving toward the WNW slightly faster at 6 mph. Beta is not expected to strengthen any further as dry air is being wrapped around the center. Wind shear is also a factor keeping Beta from reaching hurricane status. With this said it is still expected to bring several inches of rain to parts of Texas. In fact, rain bands are already impacting southeast Texas. Beta will move to the northeast by mid week and will speed up toward the end of the week bringing rain to parts of the southeastern United States. Tropical storm and storm surge watches and warnings remain in effect for parts of the Texas and Louisiana coasts.

Tropical Storm Beta still has maximum sustained wind of 60 mph, but has now taken a turn to the WNW and is moving at 5 mph. As a ridge in the southern plains breaks down next week Beta will take a turn to the northeast, but not before making landfall in Texas sometime Tuesday. Beta is not expected to strengthen any further in the coming days. It will remain inland over Texas and Louisiana until becoming a remnant low later in the week. Hurricane watches have been dropped, but storm surge and tropical storm watches and warnings are still in effect for parts of the Texas and Louisiana coasts. Beta will have no impacts to our weather here in southwest Florida.

Tropical Storm Beta has not increased in strength, but it is now moving very slowly to the NNE at 2 mph. It still contains maximum sustained wind of 60 mph. It is expected to turn to the WNW on Sunday as a ridge builds to its north. Eventually Beta should make landfall somewhere in southeastern Texas as a Tropical Storm, but could be a category 1 hurricane at that time. Once inland, Beta will move northeastward bringing rain and wind into parts of Louisiana. Tropical storm watches are in effect for the Louisiana coast.

Tropical Storm Beta hasn't weakened or strengthened over the past several hours. In fact its not moving either. It's stationary with maximum sustained wind of 60 mph. Central pressure is now at 994 mb. As a ridge develops to the north of Beta, it should start moving toward the WNW. Beta should be very close to the Texas coast if not making landfall sometime early Tuesday morning. A trough moving through the central United States should cause Beta to move northeastward. Storm surge and tropical storm warnings are in effect for parts of the Texas coast. Over a foot of rain could fall in parts of Texas and Louisiana through the middle of next week, but we won't feel any effects from this storm in southwest Florida.

Tropical Storm Beta is still packing wind of 60 mph as its moving to the north at 8 mph. A ridge will cause Beta to move westward over the next few days and then curve back toward the northeast sometime next week. Beta is expected to strengthen into a category 1 hurricane Sunday and possibly make landfall along the Texas coast next week. Hurricane, tropical storm, and storm surge watches are in effect for parts of the Texas and Louisiana coasts.

Tropical Storm Beta has strengthened to a moderate tropical storm with maximum sustained wind of 60 mph. Hurricane hunters flying through the storm have measured wind speed of 60 mph as strong bursts of convection to the north of its center. The central pressure has lowered to 996 mb as it moves to the NNE a bit faster at 12 mph. Storm surge and hurricane watches have been issued for parts of the Texas coast and tropical storm watches have been issued for parts of the Texas and Louisiana coasts. As a ridge develops to its north Saturday Beta's forward speed should slow and eventually turn toward the west. A shortwave trough could cause Beta to move back toward the northeast sometime next week. Either way parts of Texas and Louisiana have the potential for ten or more inches of rain as slow moving Beta remains in the vicinity of Texas and Louisiana.

T.D. #22 just strengthened into Tropical Storm Beta. Maximum sustained wind is 40 mph and it is moving toward the NNE at 9 mph. Circulation with Beta has become more well defined over the past few hours and wind speed has increased a bit to tropical storm criteria. Beta is still encountering strong southwesterly wind shear so its expected to strengthen slowly through the weekend. Beta could become a category 1 hurricane late this weekend or early next week. Beta is expected to encounter a ridge late Sunday which will cause the storm to move westward. As the ridge moves eastward Beta will start to turn to the north. This should happen early next week as Beta could make landfall somewhere in southeast Texas.

The depression is moving toward the north-northeast near 6 mph and this general motion is expected through early Saturday. A slow westward motion is forecast to begin late Saturday that will likely continue into early next week. Maximum sustained winds are near 35 mph with higher gusts. Strengthening is forecast during the next few days, and the depression is expected to become a tropical storm later today. The system could be near or at hurricane strength by Sunday. The estimated minimum central pressure is 1005 mb.

Tropical Depression #22 continues to move slowly to the northeast and has maximum sustained wind of 35 mph. T.D. 22 has an elongated circulation and is still not looking all that impressive. Conditions are expected to become more favorable for further strengthening Friday and into the weekend. T.D. 22 is expected to strengthen into Tropical Storm Wilfred which would be the last named storm before using letters from the Greek alphabet. A trough located northwest of the storm is expected to dissipate with a high building over the south central U.S. This should cause what will be Tropical Storm Wilfred to take a westerly turn possibly making landfall in southern Texas sometime next week as a moderate to strong tropical storm.

Tropical Depression #22 has now formed in the southwest Gulf of Mexico and is slowly moving to the northeast. Its expected to meander around the western Gulf over the next several days. T.D. #22 has wind of 35 mph, but conditions are conducive for further strengthening of this storm and Tropical Storm Wilfred should be named tomorrow or Saturday. As a trough weakens and lifts to the northeast, T.D. #22 should move westward. Right now this looks to be a moderate to strong tropical storm lingering off the southern Texas and Mexican coast early next week. It looks like this will not be a threat for SWFL.