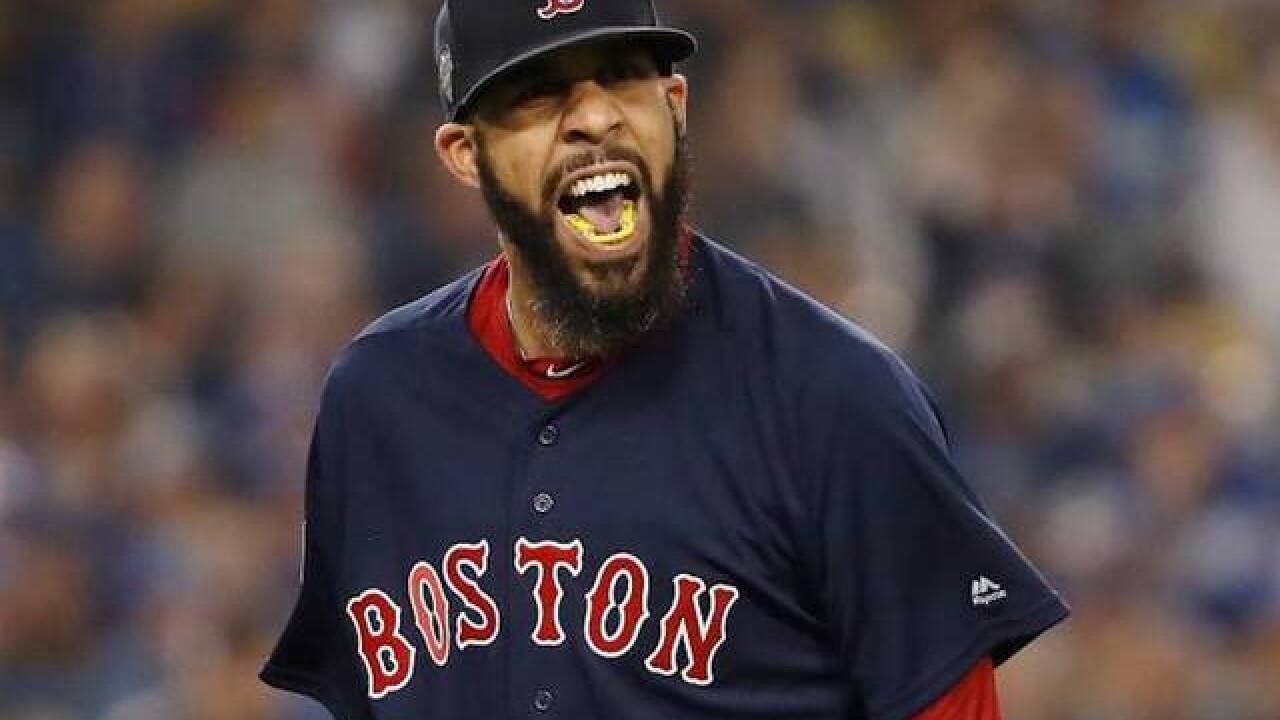 With the use of the long ball, the Red Sox defeated the Los Angeles Dodgers 5-1 on Sunday at Dodger Stadium, winning the 114th edition of the Fall Classic four games to one.

Steve Pearce hit two home runs for Boston, joining Babe Ruth and Ted Kluszewski as the only players 35 or older to have a multi-homer World Series game. The first was a two-run shot in the top of the first inning. He later had a solo home run in the eighth.

Pearce, a journeyman who has played for every team in the American League East division, had three home runs and eight RBI in five games. He was named World Series MVP.

"Baseball is a funny game," Pearce said to Fox Sports. "The longer you stay in the game, great things can happen. I'm very blessed to be here right now."

Clayton Kershaw, who may have played his final game in a Dodgers uniform, took the loss. In seven innings, he gave up four runs on seven hits -- three of which were home runs -- and struck out five.

For Boston, starter David Price was brilliant. After surrendering a home run to David Freese on the first pitch, he allowed just three hits, walked two and struck out five in seven innings. Before he was pulled in the bottom of the eighth, Price had retired 14 batters in a row.

For a long time, Price had been known for his playoff shortcomings, having never won a game. He now has won three, including two in this World Series.

"It's very special," Price said to Fox Sports, gesturing toward his Red Sox teammates. "Seeing all these grown men over there just acting like little kids, that's what it's all about."

This is the ninth championship for Boston, tying the Red Sox with the Athletics for third most all time. Only the New York Yankees (27) and St. Louis Cardinals (11) have more.

Boston, who last won it all in 2013, has now won four titles since 2004, which was the year the Red Sox broke what was then an 86-year drought between championships.

Boston's Alex Cora, in his first year as a manager, is the first Puerto Rican manager to take a team to -- and now win -- the World Series. He led the Red Sox to their best season in the franchise's 118-year history -- and it's near the top of the sport all-time.

"What a season," Cora said to Fox Sports. "Everything starts with these guys. They're very talented. They bought into it from day one in spring training. They've been very consistent as far as preparation, going about their business. What a way to end it."

Boston entered the World Series as the favorite, as the Red Sox were superior all year. They went 22-9-1 in spring training. They won a franchise-record 108 games in the regular season.

Spanning the regular season and postseason, Boston won a total of 119 games, the third-highest total in baseball history. Only their rival, the Yankees, had more wins en route to winning it all, winning 125 games in 1998. The other team to win more than Boston is the Seattle Mariners, who won 120 games before losing in the 2001 American League Championship Series.

The Dodgers, the National League champion and in the World Series for the second year in a row, were trying to win their seventh title and first since 1988.

"This was a tough one for us tonight, it really was," Kershaw, who now will need to decide if he will exercise the opt-out clause in his contract, said. "Myself personally, it was tough. David pitched a great game. I got outpitched, and we lost the game. I've got three days now to think about all that stuff before anything happens. It will be an eventful three days for me, and I'll try to figure it out."

This was the sixth consecutive year the Dodgers were in the postseason, but it wasn't quite as straightforward to get back to this point. After an initial struggle, they clawed up the standings in the National League West, defeating the Colorado Rockies in a tiebreaker game to win the division.

Los Angeles won 92 games in the regular season and defeated the Atlanta Braves in the National League Division Series and Milwaukee Brewers to win the NL pennant.

"All year when it didn't look so good, our guys stuck together, stayed the course and believed in one another and put ourselves in a chance to win a championship," Dodgers manager Dave Roberts said. "That's not easy to do."

Despite their rich baseball histories, this was only the second time these two teams faced each other in the World Series. The first time was in 1916, when the Red Sox defeated the then-Brooklyn Robins. Back then, like now, Boston took the series four games to one.