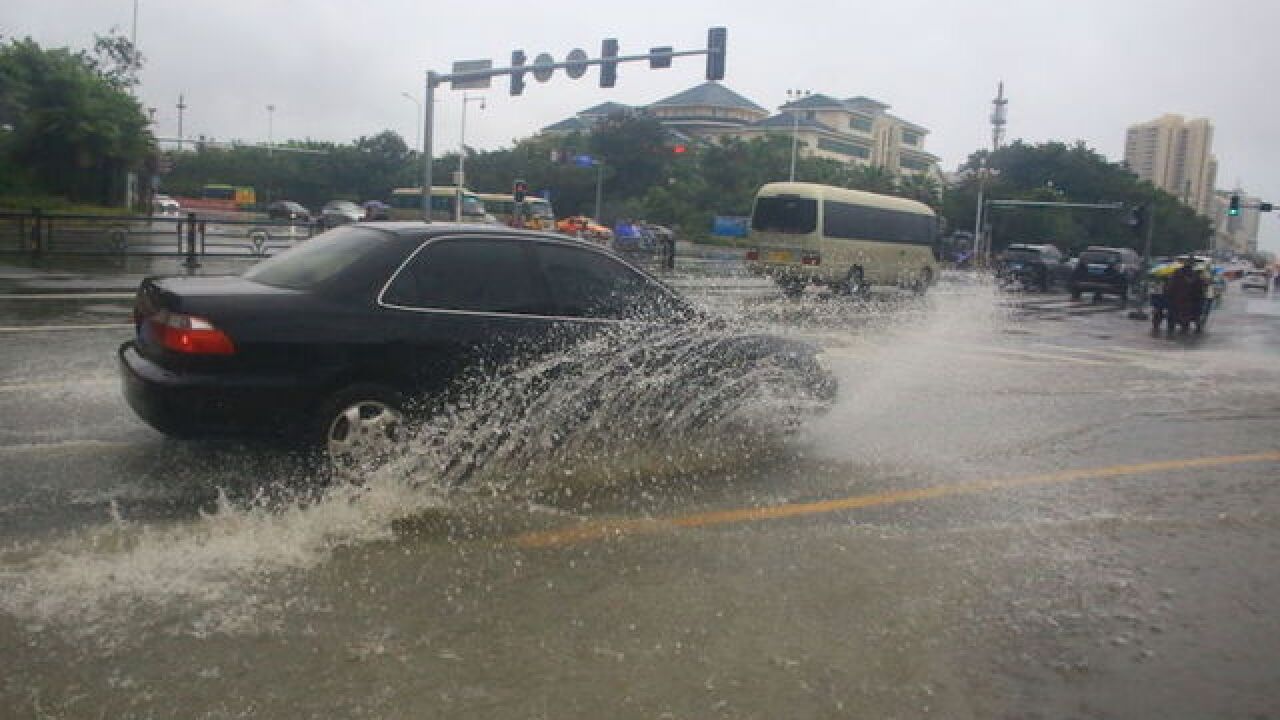 Image copyright 2018 Getty Images. All rights reserved. This material may not be published, broadcast, rewritten, or redistributed.
<p>Car and bus travel in the rain brought by Typhoon Son-Tinh on July 18, 2018 in Sanya, Hainan Province of China. </p>

One of Japan's largest airports was swamped and a tanker crashed into a bridge as the strongest typhoon to make landfall in mainland Japan in 25 years hit the country's southern prefectures Tuesday, causing storm surges and lashing buildings with heavy wind and rain.

At least six people have died and 160 people have been injured since the typhoon made landfall, according to Japanese public broadcaster NHK on Tuesday.

Police in Shiga told CNN that at least one man has died in Higashiomi City after the warehouse he was working in collapsed.

Typhoon Jebi landed with "very strong" force in Tokushima prefecture in the early afternoon, the strongest typhoon to hit the country's mainland since 1993, said Akihiro Kikuchi, from Japan's Meteorological Agency.

Coast Guard spokesman Keita Sakai said an 89-meter-long tanker, the Houunmaru, had been pushed by the strong typhoon winds from its anchorage at sea into the bridge connecting Kansai Airport with the mainland.

Images from state broadcaster NHK showed the bridge of the ship embedded in the structure.

Eleven crew members were on board, but no one was injured in the incident, Sakai said.

The typhoon's center made landfall again near the coastal city of Kobe at around 2 p.m. (1 a.m. ET).

Hundreds of domestic flights were canceled, along with international flights from Kansai Airport in Osaka.

Both runways were closed and later swamped with storm surges that caused record tides in Osaka Bay. Water was also rising near Kobe, the Meteorological Agency said.

Social media users posted videos that showed the force of the storm.

Towns and cities in the prefectures of Gifu, Aichi, Kyoto, Osaka, Hyogo, Nara and Wakayama on Honshu, along with Tokushima, Kagawa and Kochi on the island of Shikoku have been affected.

Almost 14,000 residents have been moved to around 5,000 refuge zones, mostly town halls and school gyms, according to the Fire and Disaster Management Agency.

Before it made landfall, the storm had sustained winds of 140 kilometers per hour (87 mph) and gusts of 165 kmh (102 mph), the equivalent of a Category 1 Atlantic hurricane.

There is a significant threat of widespread flooding. Jebi has dumped more than 500 millimeters (nearly 20 inches) of rain in some areas and is likely to produce between 150 and 300 millimeters of rain in many locations.