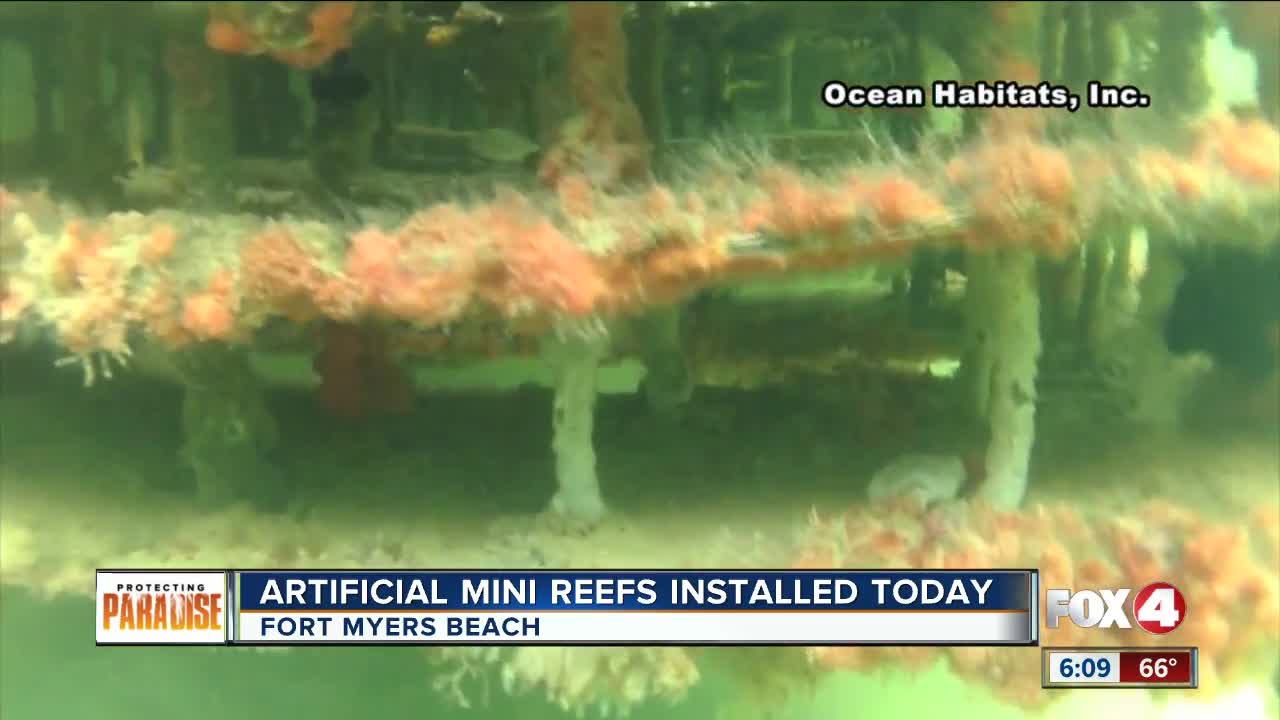 The installation came after a neighborhood got together to do something about the water quality issues they face.

More than 50 artificial mini reefs were installed on the island this week. Those living in the waterfront community of Fairview Isles were behind the effort. They wanted to do something about the poor water quality issues that plagued their neighborhood last year.

"It was terrible, smelly, not clear. The water was green, just terrible so we decided to do something about it," said neighbor Joe Fleming.

Several homeowners got together and reached out to Ocean Habitats, a nonprofit that builds and installs mini reefs.

David Wolff, president of Ocean Habitats, explained how the mini reefs help with things like algae. "It's actually the food source for the filter feeders that live here. That's breakfast, lunch and dinner for them. They strain that out of the water and expel water that's free of algae," said Wolff.

Garrett Stuart is a marine scientist and CEO of The Eco Preservation Project, dedicated to educating people on preserving our natural ecosystems. He works with ocean habitats to install these mini reefs all over Florida.

"What can I do to help the water? This is the easiest thing you can do without trying to teach you for a couple years to do what I do," said Stuart.

He said the homeowners who had these installed beneath their docks will see the mini reefs work in more ways than one.

"Some of the critters that inhabit this like our oyster friends, they’ll physically feed on that algae. Some of our homies that’ll live in this, like our sea squirts, they help filter out the nutrients. So whether you're talking about literally eating the algae or literally eating the phosphorous and nitrogen that feed the algae, it's a two-way combo action," Stuart added.

The mini reefs will also help grow more than 25,000 fish, shrimp and crabs.

"It's also going to provide a house for fish and crabs and shrimp to grow up, get larger so they can survive and reproduce," said Wolff.

About six months ago, Ocean Habitats added two under another neighbor's dock, who told Fox 4 it's already had an impact.

"I was amazed at how quickly they attracted algae growth and they're completely covered now. So they’re doing what they're supposed to be doing, and we think with the 50 plus in the neighborhood here, the neighbors are doing what they can to help with clean water," said neighbor Bob Layfield.

The mini reefs will eventually be able to filter more than 558-million gallons of water per year.

Many viewers called into the Fox 4 newsroom asking how to get a mini reef installed on their water. Ocean Habitats said you can reach out to them here.