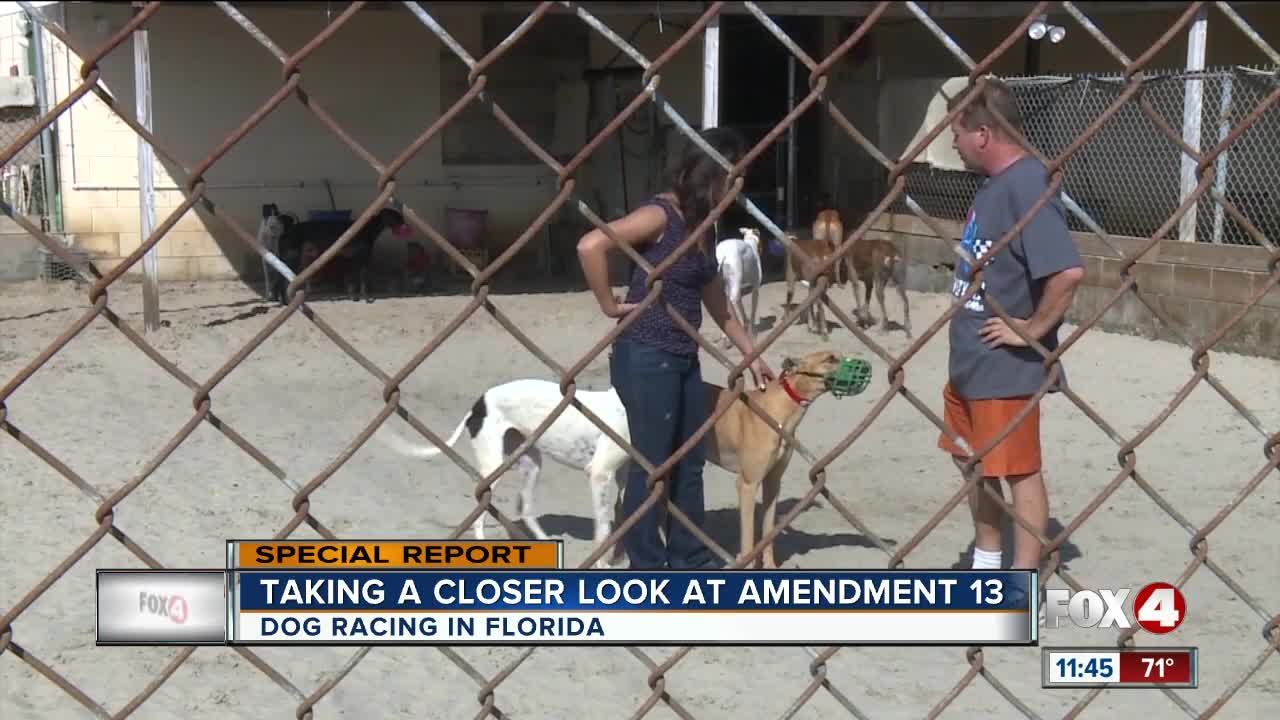 Among the 12 state constitutional amendments in Florida's General Election on November 6th, Amendment 13 is a hot button topic. 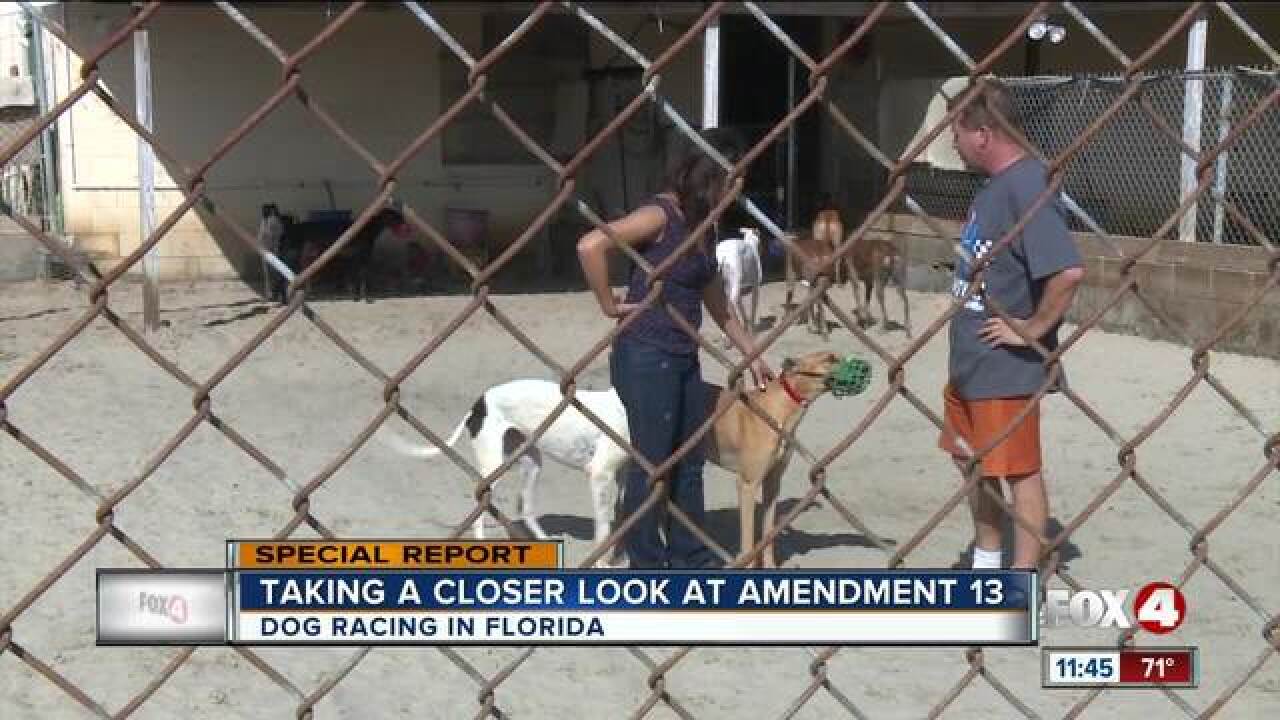 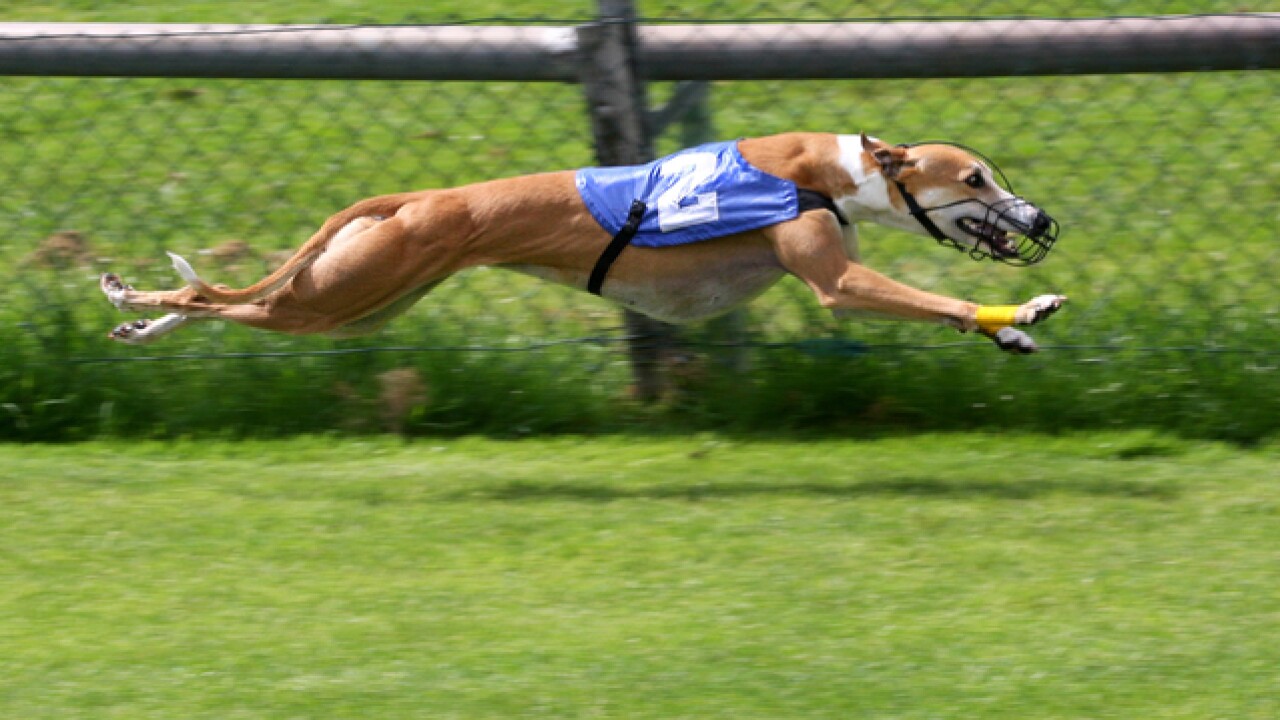 LEE COUNTY, Fla. -- Among the 12 state constitutional amendments in Florida's General Election on November 6th, Amendment 13 is a hot button topic.  It calls for the ban on wagering on dog races.

Greyhound racing is now practiced in 17 tracks in only six states. But 11 of those tracks are in Florida.

Historically, dog racing has been going on in Florida for almost 100 years. Florida made it legal in 1931. Kennels usually get the greyhound puppies when they're 16 to 18 months old and race them until they're about four years old.

Greyhounds can run up to speeds of 40 miles per hour. Sometimes, they get hurt. That's why animal rights activists say they pushed to get the ban on greyhound racing on the ballot.

Attorney general Pam Bondi helped get the measure on the ballot after her plea at the Constitution Revision Commission. "The National Humane Society and in fact, the entire country, are watching what we're doing. They are watching us," said Bondi.

AJ Grant, a kennel owner and trainer who's worked in the industry for about 30 years, says the day starts around 4:30 in the morning when the trainers come in and let the dogs out until 7. While they're out, trainers clean out their beds.

"They're not forced to race in any stretch of the imagination, not at all. If they don't want to run, they're not gonna run. If we see that, then we call the adoption agency and they come pick them up," says Grant.

Supporters for Amendment 13 started a grassroots campaign. Sharon Deming, a Fort Myers district leader for the Humane Society, claims, "Dog racing is extremely cruel and inhumane. These dogs spend 20-23 hours per day in these small, stacked metal cages. Every time they go on the track, they risk injury and potentially, death. And, a dog dies on a Florida track every three days." We posed her claims along with other Amendment 13 supporters... to the opposition.

Racing advocate and greyhound trainer since 1982, Kathy Lacasse, rebuts,  "They say, their average that they've picked up on, is one every three days, so we can roughly 100 greyhound dogs have died in Florida last year. That's in a 10,000 dog population. How many dogs died in the Humane Society in Florida for getting sick or getting hurt or getting in a dogfight? Our numbers are way better than the general population, number one. Number two, we only get paid if our dogs run well. Common sense tells you, we have to feed them right. They have to be happy. They have to be healthy and they have to be conditioned. 20 hours a day in a crate, eating rotten meat, and being abused is not going to make me any money."

On their website, the Committee to Protect Dogs claims, over the past decade, there have been over 400 greyhound drug positives at Florida tracks, including 73 positives for cocaine.

However, in an article for FloridaPolitics.com, the President of Greyhound Adopters for Racing (and a vet herself) emphasizes the need to put these numbers in context, saying the frequency turns out to be one-tenth of one percent, and that it's actually over 10 times more frequent in horse racing.

Grant adds, "It made it to the ballot because it was very political. It had nothing to do with greyhound racing. They just used the anti-racing groups as a crutch to get it passed. The real hidden agenda is making casinos out of these race tracks in neighborhoods. And I don't think Florida wants casinos in all these race tracks."

According to the Florida Greyhound Association, pari-mutuel facilities will still be allowed to operate card rooms and/or slot machines if dog racing were to be eliminated.

If Amendment 13 passes, tracks will have until 2020 to phase out commercial dog racing. It needs 60 percent to be added to the Florida Constitution.