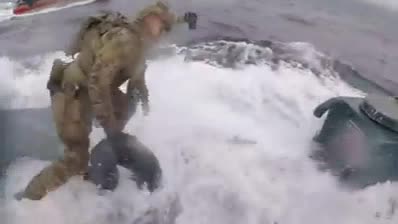 The self-propelled semi-submersible vessel was carrying over 16,000 pounds of cocaine.

SAN DIEGO -- The U.S. Coast Guard has released body cam video of an intense drug bust at sea, as units board a submarine-type vessel smuggling drugs.

The semi-submersible vessel was carrying over 16,000 pounds of cocaine.

The video shows several Coast Guard boats approaching the vessel as it motors along in the ocean, mostly below the water's surface. When the vessel does not stop, several crew members board the vessel while still in motion and open the top hatch to reveal a man inside.

This was just one of 14 recent U.S. Coast Guard busts at sea off the coasts of Mexico, Central, and South America, netting more than 39,000 pounds of cocaine, worth an estimated $569 million.

The payload is being unloaded from Coast Guard Cutter Munro in San Diego on Thursday, at an event attended by Vice President Mike Pence.