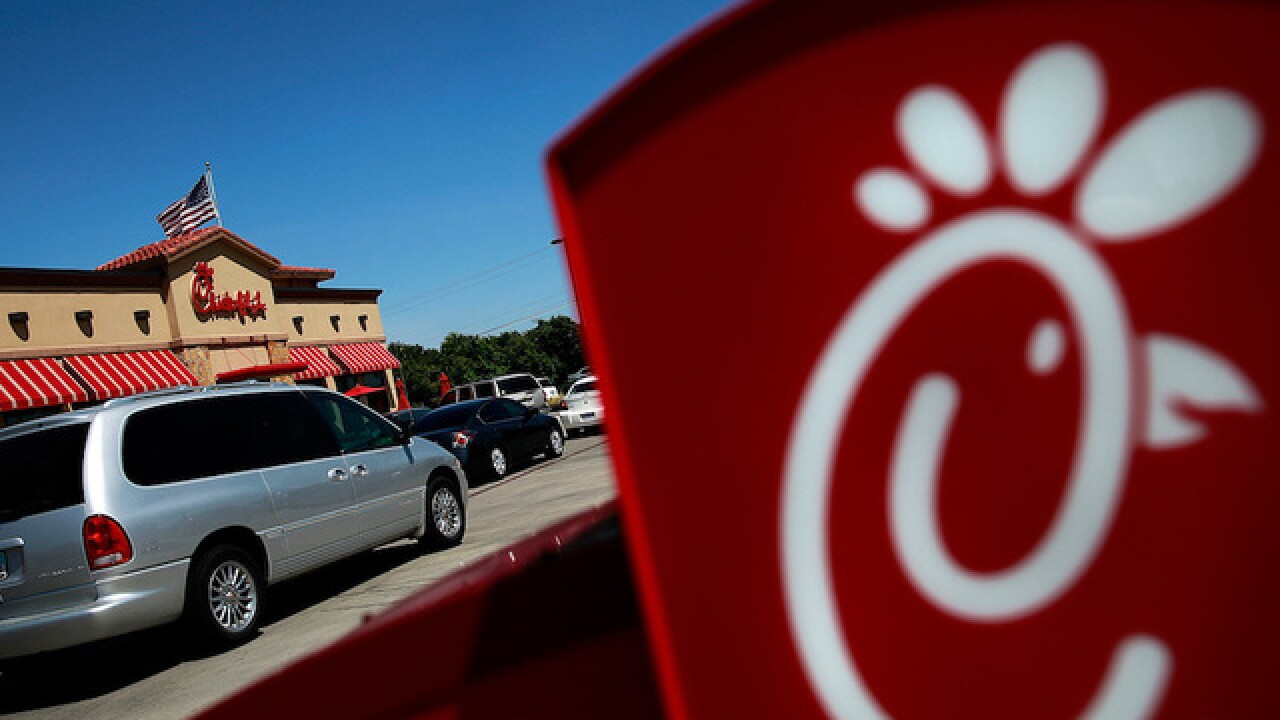 Copyright Getty Images
Tom Pennington
<p>Drive through customers wait in line at a Chick-fil-A restaurant on August 1, 2012 in Fort Worth, Texas.</p>

Gracelyn Mae Violet Griffin already had a "Little Nugget" onesie picked out for her before she arrived in the world on Tuesday night.

So it was only fitting that mom Falon gave birth to her in the restroom of a San Antonio Chick-fil-A.

In celebration of her birth, the newborn will get free food for life at her parents' favorite fast food joint and a guaranteed job when she turns 14, CNN affiliate KSAT reported.

The story of her birth started Tuesday evening when her parents loaded up their car and set out for the hospital, according to Robert Griffin's post.

They stopped outside the restaurant to drop off their daughters with a friend. But his wife, whom he calls Maggie, went into "active labor" and needed to use the restroom, according to the father's post. The restaurant was closed, but the manager let her inside.

Griffin wrote that he left the girls with the friend and returned to check on his wife.

"She's in the restroom," the manager told him. "She's screaming."

In a tiny restroom stall at the Chick-fil-A, with his wife straddling the toilet, Gracelyn's head started to emerge.

"Sweetie," he said, "we are gonna have to do this right here, right now."

The manager dialed 911 and brought over clean towels. Griffin said the umbilical cord was wrapped around the baby's head twice. He managed to unwrap the cord without alarming his wife.

"With two more strong pushes, and using my shirt for a towel, out came Gracelyn Mae Violet Griffin," he wrote. "Paramedics arrived 15 minutes later so we kept her warm by having the Chick-Fil-A staff warm up white towels in the kitchen and keep bringing them to us."

Gracelyn came into the world at 10:30 p.m. in the restroom of the Stone Ridge Chick-fil-A on US 281 and Evans Road in San Antonio, Texas.

Falon Griffin told KSAT that she and the baby "were considered high-risk during the entire pregnancy."

"Oh my gosh, we just had a baby in Chick-fil-A," she told the station. "I was like, 'This really happened. How is this my life right now?'"

Bekki Poelker, a Chick-fil-A spokeswoman, said via email that the restaurants are locally owned and operated and the offer of free food for life and a job at age 14 was made by the local operator.

The franchise owners are planning Gracelyn's first birthday party at the restaurant, KSAT reported. The parents told the station Chick-fil-A is their favorite place to eat. They had purchased the "Little Nugget" onesie months ago.

"I thinks it's pretty ironic that a proud conservative, Christian family would have a baby in a Chick-Fil-A, and wrapped in a Trump 2020 T-shirt!" the proud father wrote.