Joyce expected to weaken in the Atlantic 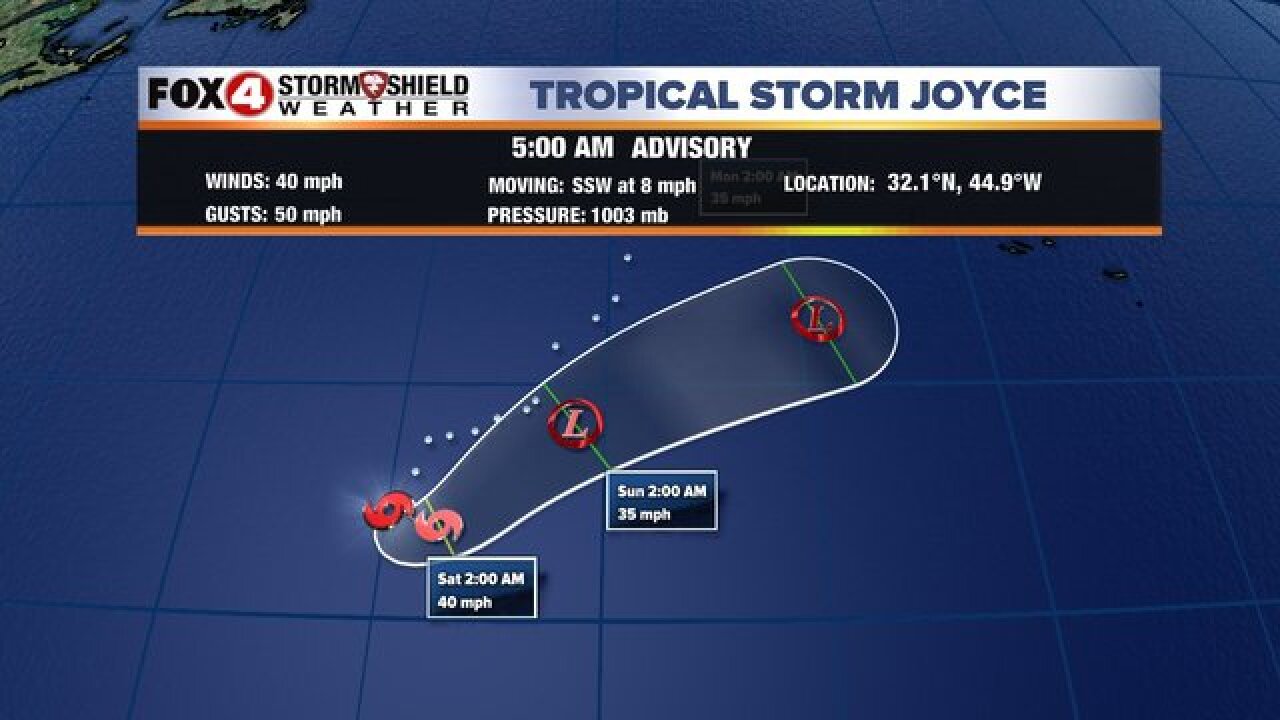 Joyce remains a tropical storm with max winds of 45 mph, moving ENE at 17 mph. Joyce is expected to gradually weaken to a depression by early next week, then eventually dissipate as it moves east in the open waters of the Atlantic.

Tropical Storm Joyce continues with winds of 40 mph in the open Atlantic. Currently moving SSW, a northeast turn is still forecast later this weekend with gradual weakening. No threat to the U.S. at this time.

Joyce has developed convection near the center of the storm with maximum sustained winds around the center at 40 mph. The latest update upgrades Joyce from a Subtropical Storm to a 'Tropical Storm'. Joyce is no threat to land.

Subtropical Storm Joyce is moving west-southwest in the open Atlantic with a turn toward the north and northeast expected this weekend. Winds are near 40 mph with little change in strength expected over the next few days, although Joyce could become a Tropical Storm sometime this weekend.

Subtropical Storm Joyce has drifted southward in the open Atlantic with no change to strength, winds at 45 mph with higher gusts. Some strengthening is possible in the next few days and Joyce could become a Tropical Storm by this weekend. A turn toward the northeast and an increase in forward speed is forecast by the weekend, and Joyce is no threat to the U.S. at this time.

Subtropical Storm Joyce has formed in the north Atlantic.

Joyce formed from an area of low pressure about 800 miles west southwest of the Azores. The National Hurricane Center says Joyce has 'developed a cyclonically curved band of deep convection near the center.'

As of the 5pm advisory, Joyce has maximum sustained winds of 45 mph and is moving southwest at 6 mph.

Joyce may acquire tropical characteristics over the coming days and could strengthen a bit. However, Joyce is moving nowhere near the United States and won't be a threat to land.