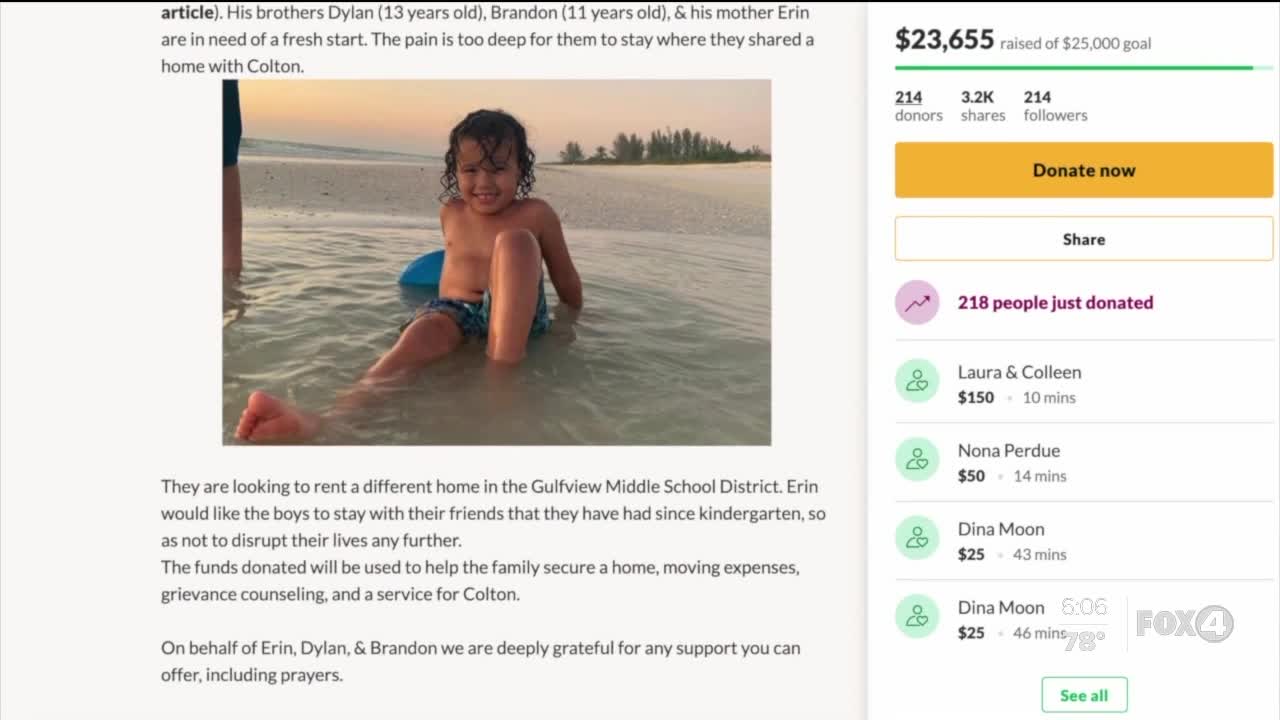 Family sets up a GoFundMe account to help a grieving mother after losing her 5-year-old son to the hands of his father.

NAPLES, Fla. — A Naples family is left grieving the loss of a 5-year-old boy who, officials say, was murdered by his father.

It happened Monday morning, The Collier County Sheriff's Office says they responded to a shooting at the Royal Bay Villas in Naples.

Once deputies arrived, they found 5-year-old Colton lying next to his father in one of the apartment's bedrooms; both were deceased.

Deputies say the father, identified as 45-year-old Paul D. Warren, was found with a firearm still in his hand.

Detectives are investigating this case as a possible murder-suicide.

FOX 4 spoke with a family member of 5-year-old Colton, who says Colton's mother, Erin, is now in need of the community's support.

"Erin saw a counselor the day after Colton died, and the counselor asked Erin if she could have anything in the world right now what would it be," said Meredith Meller, who is married to Erin's brother.

Knowing that it would be impossible to bring Colton back, Meller says Erin wished for a way to get a fresh start with her two other boys by moving into a different home.

Meller says the pain is too deep for them to stay in the same home that they shared with 5-year-old Colton.

Knowing the family would need financial help, Erin's family sprung into action by creating a GoFundMe account to also help with other expenses.

"[She will] use funds to have a service for Colton, as well as, get the proper counseling for her two boys and herself to help them get through the pain that they are going through right now," said Meller.

Children's counselor at Avow, Greg De Pol, says children often times have a difficult time verbalizing their grief after losing a loved one.

"In counseling they can find different ways of expressing themselves by using art, music other expressive interventions," said De Pol.

Meller says the Colton's mother and two older brothers, ages 13 and 11, are taking it day by day, just trying to get through these difficult times.

“We are extremely thankful, as a family, to see the community jump in and help out so quickly, and I think it's a true testament to show just how loved they truly are,” said Meller.