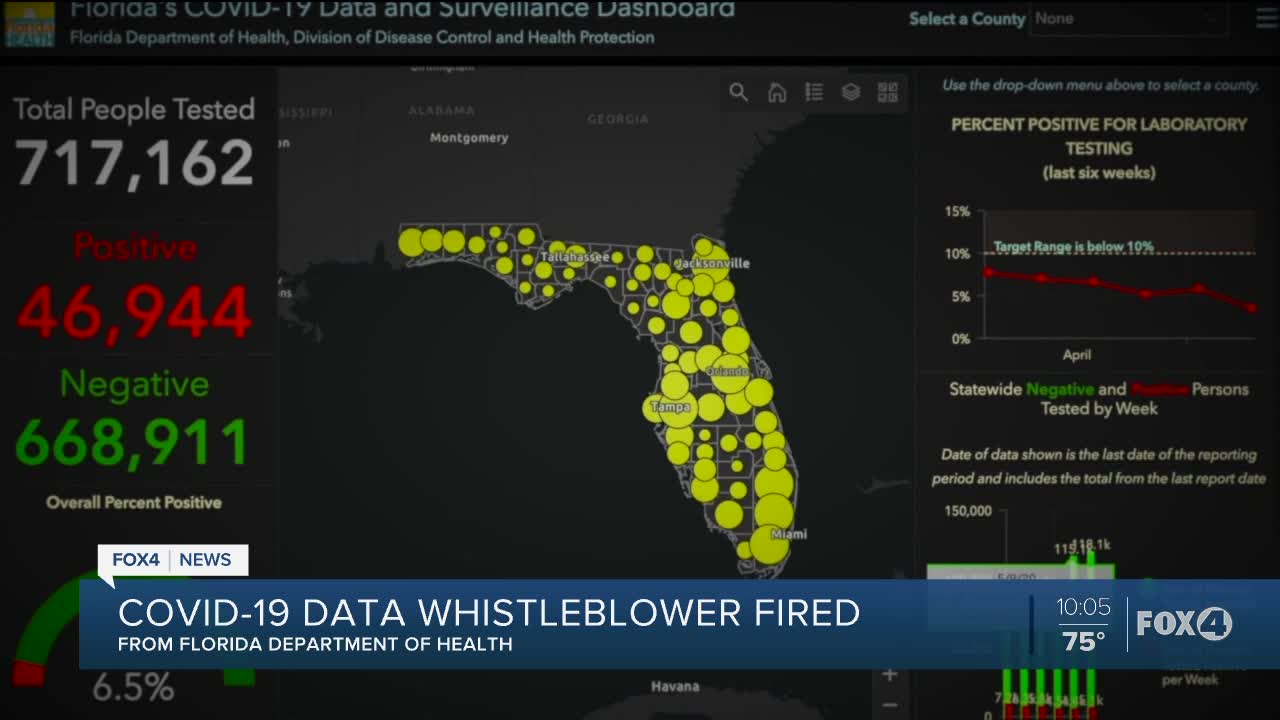 Former Health Department employee Rebekah Jones has responded to Governor Ron DeSantis for the first time in a public statement posted on her website Friday.

Former Health Department employee Rebekah Jones has responded to Governor Ron DeSantis for the first time in a public statement posted on her website Friday.

Florida's Department of Health involuntarily dismissed the former data manager Thursday after she turned down an option to resign.

Jones made headlines earlier this week after she called out the Department of Health in an internal email, saying she was asked to censor the numbers related to COVID-19 cases.

Governor DeSantis publicly disputed Jones' allegations stating “She is not an epidemiologist, she is not the chief architect of our web portal that is another false statement. She’s not a data scientist. She’s somebody that got a degree in journalism communication and geography. She is not involved in collating any data, she does not have the expertise to do that."

In her statement Friday, Jones defended herself against the Governor's remarks saying, "to try to give others the credit for the work I did, work he and even the White House praised just weeks ago, and his shocking and salacious attempt at character assassination through the mainstream media, feels like a cheap political move to avoid discussing the real story here, which is how the COVID-19 data is now being manipulated."

Jones also says she has never implied that the Governor was involved in asking her to "manipulate, delete, and hide date."

Jones' statement goes on to say it was her supervisor, Deputy Secretary of Health, Shamarial Roberson, who asked her to "manipulate and delete data in late April as work for the state’s reopening plan started to take off, and she is the one who ordered me off the dashboard and fired me when I objected to repeated requests to manually alter, hide and delete public data."

Then on May 4th, Jones says she received more instructions from another person who, she says was never in a position of authority over her, to hide all of the data from the public and "make it inaccessible for anyone to download and, consequently, analyze or check for accuracy." Jones says her statements can be proven through email and texts.

A spokesperson for the Governor issued a statement saying Jones was removed for a repeated pattern of insubordination, including making decisions to modify COVID-19 data without approval. DeSantis also said Jones should have been dismissed a long time ago because of previous cyberstalking charges.

According to court records, Jones was charged with cyberstalking a former flame in 2019. According to court records, Jones started a relationship with a student in 2017 while she was teaching at FSU. That relationship resulted in several criminal charges but no convictions.
“So I’ve asked the Department of Health to explain to me how someone would be allowed to be charged with that and continue because this was many months ago. I have a zero-tolerance policy for sexual harassment,” Gov. DeSantis said.

According to a Department of Health spokesperson, Jones is currently on a prescheduled, annual leave. Her official last is Monday, Jones has not responded to repeated attempts to contact her.

"It is patently false to say that the Department of Health has manipulated any data." said Dr. Shamarial Roberson, Deputy Secretary for Health.