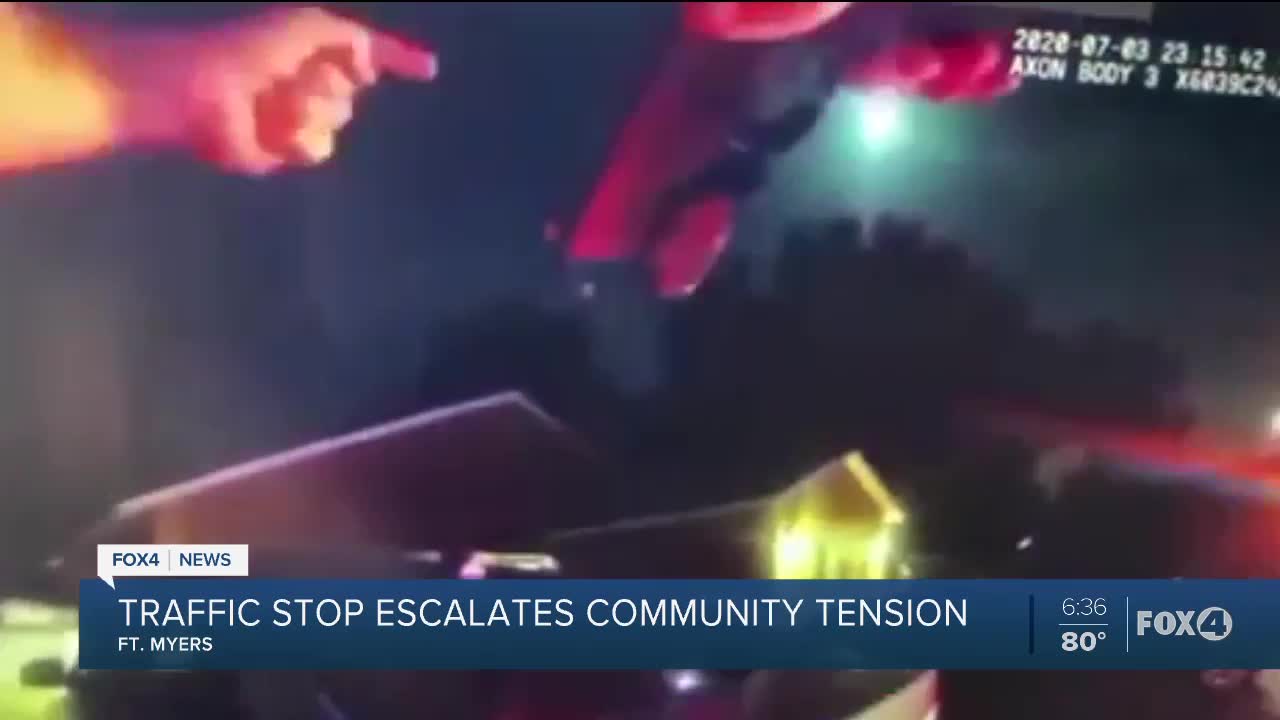 You can hear an officer yelling, ‘Get down. Get back in the car!’ The video doesn’t show them mentioning they’re FMPD. Keenan Carter, the passenger eventually detained for not wearing a seatbelt says he didn’t know a traffic stop was happening.

FORT MYERS, Fla. — Body cam footage released by Fort Myers Police Department shows an officer turning on his overhead lights and getting out of his car on Verona street Friday night.

You can hear an officer yelling, ‘Get down. Get back in the car!’ The video doesn’t show them mentioning they’re FMPD. Keenan Carter, the passenger eventually detained for not wearing a seatbelt says he didn’t know a traffic stop was happening.

“We were never pulled over. By the time this unmarked vehicle turned on his lights and got out of his vehicle and said get back in the car, I am already at my sister’s screen door,” he said.

FMPD released a portion of the video. Fox 4 requested body cam footage of the entire incident, but was denied due to the "active criminal investigation."

Ring video shows Carter walk towards officers with his hands up as another man enters the house. Going back to the body cam footage, you can see an officer follow the man inside and hear him say ‘Get out of here now!] You hear the officer give commands without announcing what agency he’s with or why he was inside the home. Carter says they could’ve handled it better.

Rachel: “Is there anything that you think you could’ve done differently in this situation?”

“I don’t know if there’s any way to soothe this unrest or soothe somebody’s conscience when it comes to dealing with police. Should they be concerned? Absolutely,” said Thomas. “But this battle is not won at that car.”

He says the seatbelt law passed in 2009 allows officers to pull someone over for a violation. If that person walks or runs away from the investigation, officers can follow them based on fresh pursuit statute, which is why FMPD lawfully entered that home.

“Because he’s home, or where he says he’s going to go, he’s still obligated to stay until the investigation is complete,” said Thomas.

“If the lights could’ve come on sooner, that’s it. Other than - and if that’s what truly happened. Other than that I don’t think anything else could’ve been done any differently,” he said.

Thomas added people were concerned about the seatbelt violation law before it passed in 2009, fearing that officers would use it as a means to racially profile. He says to monitor this, officers are required to report data on those citations to the state legislature every year.

Carter also says officers took his gun, even after he showed them his license to carry.

In a statement FMPD said:

“Carter claims to be the owner of the firearm however this was not able to be confirmed and he can claim and resume possession on Monday during normal business hours as Georgia does not respond after hours.”

The local NAACP chapter says this could have been an opportunity for FMPD to strengthen their relationship within the black community. President James Muwwakil plasn to talk about the fresh pursuit statute in his next meeting with local law enforcement.