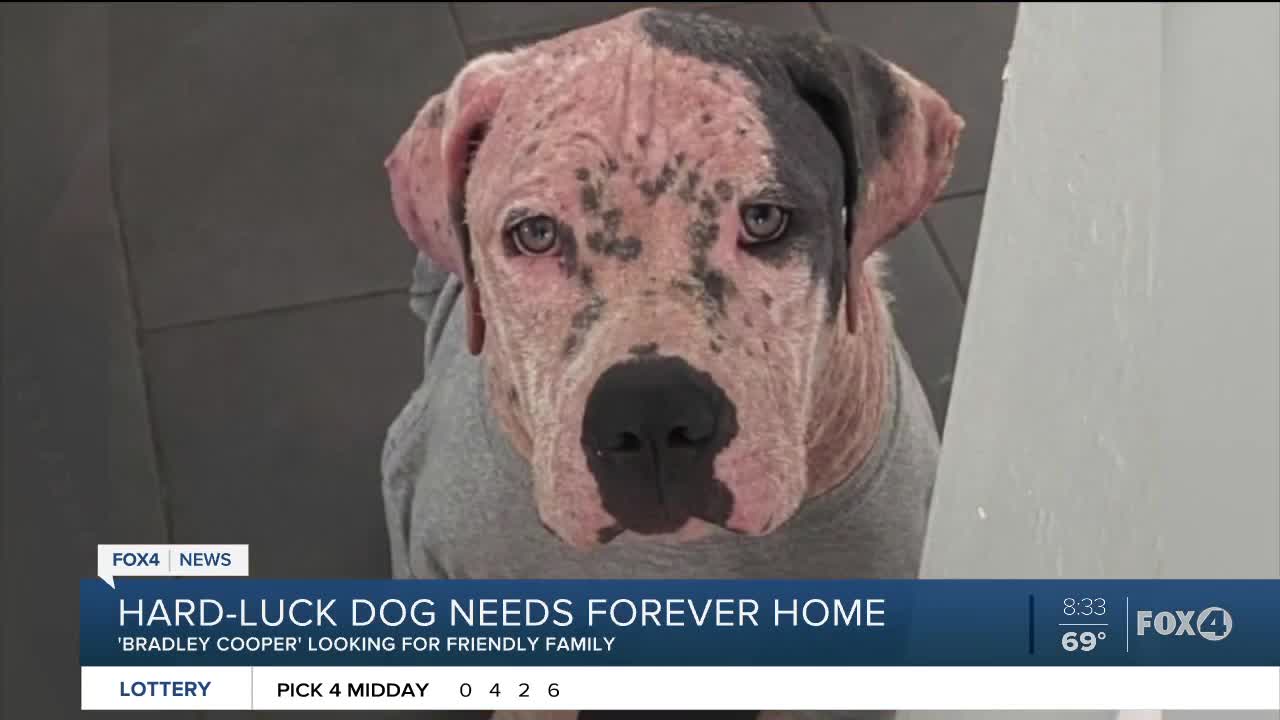 A local rescue has taken in a dog with a tough past. He was neglected, and because of that, developed a skin condition which caused him to lose most of his fur. He's recovering, and the rescue has named him "Bradley Cooper" because of his big blue eyes.

A local rescue has taken in a dog with a tough past. He was neglected, and because of that, developed a skin condition which caused him to lose most of his fur.

"He had scabs all over his entire body," the dog's Veterinarian, Dr. Thomas Jackson said. "One big infected scar. Very visually unappealing."

This dog wears T-shirts to cover his body. But his rescuers with Love is Fur Ever Dog Rescue didn't see that. All they saw were his big blue eyes.

"He’s got, well, these eyes that captivate you, and all of the sudden, you’re sucked in," Dr. Jackson said.

Because of those big blue eyes, his rescuers named him Bradley Cooper. He was rescued from a high kill shelter in Miami-Dade County. Given his initial appearance, Love is Fur Ever feared the worst and knew they could save him.

"Whether they come in severely injured, or they come in with some of their fur missing, they all have a purpose," Victoria Frazier, the Founder, said.

Dr. Jackson estimates he's about a year old, and said he has a severe case of Demodex.
"It's a little mite that causes hair follicles to fall out, and then all these infections start to grow," he said. "You get some stress, you get some skin wounds, and it just spirals right out of control."

Dr. Jackson said he was likely stressed because he was neglected. A condition like his takes months to develop.
"You’re not talking a couple of days of 'Oh, I forgot about this,'" he said. "It stinks really bad, and you can’t exactly ignore that. Or I guess supposedly you can, but it comes at a cost, which is sad."

Right now, Bradley Cooper lives with his foster mom, Judith Woerler. His past is tough for her to think about.
"Sick. Sick to my stomach. He's had a family or a person in his life before," she said. "He is a super sweet dog. Really, really super sweet. He just wants to be loved."

But she said because he was neglected, he has separation anxiety. It's something she's working with him on, and training him to be alone. Dr. Jackson said medication will cure his condition, but it takes some time. He said it's unclear if his skin will ever fully recover or if his fur will fully grow back.

"Right now, the goal is to get rid of the infections and mites, and find out what kind type of fur is still there. Or what scars are there, and can help us tell the story," he said.

Bradley Cooper's story is one we can all learn from: to not judge from what you see on the outside, but the love that's inside. A love his rescuers say you can feel if you look in the right place.

"Just look at his eyes. They tell the whole story," Woerler said.

The rescue has spent more than a thousand dollars nursing Bradley Cooper back to health since Fox 4 filmed his story, and in that time, he's already seen some major improvements. Now, Bradley Cooper is looking for his forever home. He'll be available for adoption soon. If you want more information on Love is Fur Ever Dog Rescue, how to donate, or how to adopt Bradley Cooper, click here.