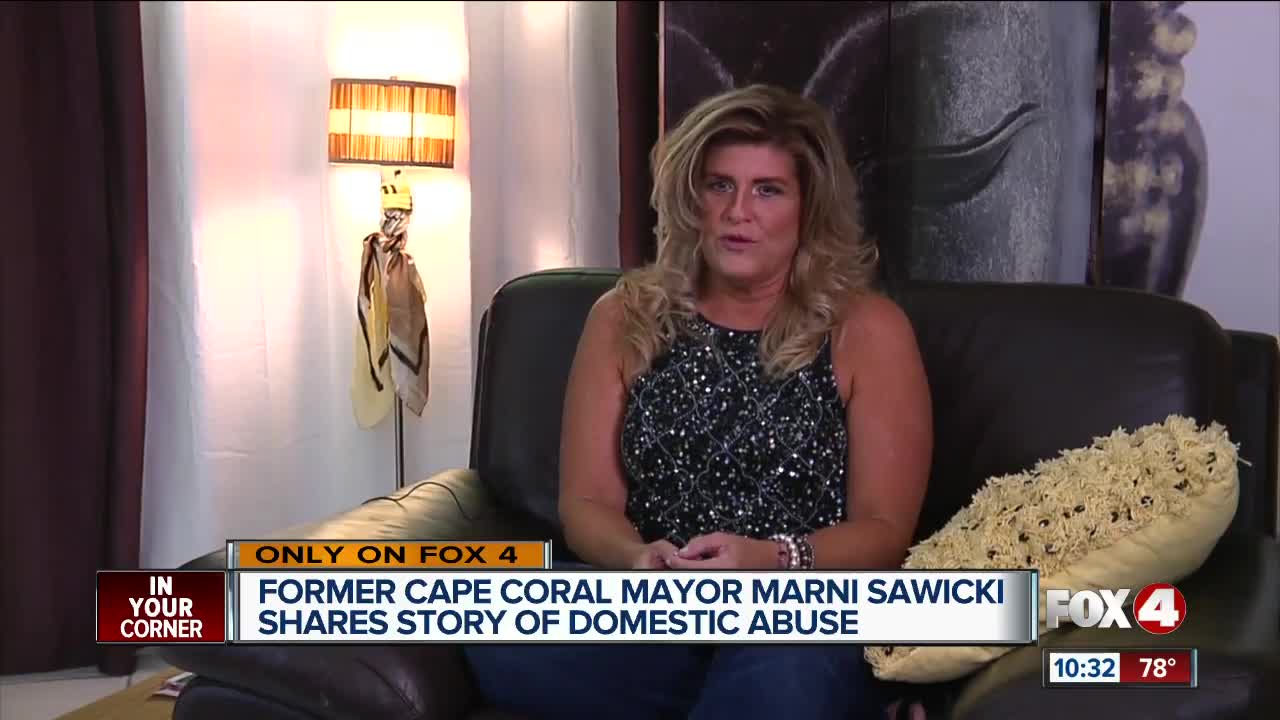 Cape Coral's only female mayor, Marni Sawicki, speaks out about her own experience with domestic violence.

In 2017, she was under an internal investigation, in which she was eventually cleared. But she was also dealing with trouble in her private life.

On June 24, 2017, Sawick and her now-ex, Kenneth Retzer, a former Cape Coral fire captain, attended the Mayors Conference in Miami Beach. After having a couple of drinks at the hotel bar, they got into an argument. It escalated when they returned to their hotel room. Sawicki and Retzer then had a heated exchange while Sawicki's son was in the adjoining room. Sawicki recorded part of the incident on her phone. She remembers, "One of the things I started to do, was write down the names he called me. I'd write them down and he would go rip them up. Then the next day, I would get the, 'I didn’t say it like that.' I'm like, 'Am I going crazy,' because I’m sure he said that. So I started to record."

That same night, Retzer was arrested after calling 911, himself. The Miami Beach police report says that Sawicki had noticeable swelling above her left eye and on her chin. The responding officer also wrote, "Sawicki said that Retzer straddled her and placed his hands over her throat. Sawicki said that she began to have difficulty breathing. Retzer then began to strike Sawicki in the face and head with a closed right fist.” Sawicki says that night was the last of their tumultuous relationship that started in 2015. The public figure admits they broke up several times, only to go back to each other every three to four months. Even after they divorced, they reconciled. Sawicki says, "A lot of the stuff with my ex did look crazy from the outside, but from the inside, I was just trying to manage the turmoil."

When news of the Miami Beach incident first made headlines, Sawicki initially didn't acknowledge her private life. Then, she decided to open up about it. She says she is not ashamed and now wants other women to hear her story, if it will keep them away from the domestic abuse Sawicki survived. She believes, "There’s power in telling your story."

In the two plus years since she left office, Sawicki says she's in a better place after becoming a survivor of domestic violence. That meant, fully coming out of an unhealthy relationship and getting to the hearing date for Retzer. Sawicki admits that it's been "difficult on my kids, difficult on friendships. But I knew I had to do it." While Sawicki and her children have never been closer for the experience, she did have to purge other personal relationships. She quotes one of her favorite motivational speakers, "Not everyone that’s in your boat is rowing with you. Some are drilling holes."

Sawicki recently received her 501 (c) 3 status to run her non profit, Indigo Sky. She says her purpose now, is to empower other women and help victims of domestic violence. Her message for other people in her situation is to find the strength to get through it. She says, "Valuing yourself enough to know when to say, 'I’m not ok with that. I’m not going to put up with it and I wish you well. But I’m walking away.' "

Satistics show the average number of times a woman goes back to her abuser is seven times. Emergency shelters serve the victims, but only for 45 days. Sawicki says, "That doesn't even cover one court date. How do you feed your kids? How do you get time off work? How do you not go back? And for someone to say the average is going back seven times, there's a reason for that. They don't have that support. I believe we'll be the missing piece."

Domestic violence is a topic where people often feel shame about the situation they're in. Sawicki recalls listening to other victims' stories while in recovery. "I just don't think I could leave. I don't have the resources. Or, I don't know how. I don't know where. I'm not strong enough. Those are the times I feel like I've been put in this position to say, but you are. You really are."

If you or, someone you know, is in a domestic violent situation, there are resources to help you get out.
https://naplesshelter.org/
https://www.thehotline.org/
http://www.actabuse.com/

My name is Marni Sawicki for the record. If I may, I would like to play the video of the night of the incident for the court (play video).

Coming up with words to describe the impact this very public event has had on my life has been extremely difficult. I created this binder as an outline of all of our text messages, emails and voicemails we have exchanged over the last 2 years. I was hoping that somehow it would heal the wounds and help me understand how we ended up here. Unfortunately it did not. As I read the texts leading up to the first restraining order in 2016, then those after during reconciliation, one thing is glaringly clear, what was done to me and my children in both private and in the public eye is unthinkable, unimaginable and unforgiving. The psychological and physical abuse I received over these 2 years has changed my life forever. You took advantage of my trust and took

Isolated me from my family and friends. You made sure to call my family, my friends, our friends, prominent members of our community, without me knowing to paint yourself as the victim. You took photographs of my personal items in my home and gave them to people in the city to distort and try to force me to resign from my position as mayor so you could continue to control me, humiliate me and keep me in line. As a result of your actions, a councilmember armed with innuendos and half truths publicly accused me at a council meeting on TV of crimes I had never committed. You threatened to take our personal messages public to keep me quiet and in a constant state of shame. Armed with the information you stole from me, members of our community filed reports with the FBI, Florida Department of Law Enforcement, and the Ethics Commission. The city performed an investigation and was given very personal emails between the two of us that further shamed me into submission. With no one left to turn to you had me under your complete control.

Your actions left my reputation in shambles. I was victim blamed and bullied on social media and by several media outlets. I still wonder what damage was done psychologically to my son as he had to hear you beating and yelling at me and couldn’t open the adjacent door to help me.

Not until counseling would I fully understand terms like: “Gaslighting” and “Crazy Making”. Both are a common practices of abusers to attempt to convince their victims they are defective making the victim more emotional, more needy or dependent. You used “Crazy-making” to

cause me to question my communication skills, how I view my ability to express myself, and eventually my sanity. You slowly and deliberately stripped me of my self-confidence and dignity all the while isolating me from everyone so I’d have nowhere to turn. You had me to the point of contemplating suicide more than once to escape the merry-go-round and hell our relationship was most times.

You publicly humiliated me many times by calling 9-1-1 or by having your friends leak information to the press so they would constantly stay on top of me. At one point one news outlet had a graphic display of relationship timeline showed over and over and TV and social media; however, the defining moment was this past June while we were at the US Conference of Mayors here in Miami. My children and I will never be able to forget that night in the video where you once again called me horrific names, lunged at me, strangled me and beat my head with your fists causing me to have a concussion. You threw my shoes at my head all the while telling me I should have thought of that before doing all the things I did to you. You bruised my eye and left rug burn on my chin from pushing my face down into the mattress while you continued your brutal beating. You said horrible and untrue things about me and my daughter. When you left the first time, I was so disoriented and hurt it never even occurred to me to call the police. My son had to witness all of this in the room next door. You left me there for my son and daughter to take care of me before returning a few hours later. You raised your hand to my daughter, called her names and yelled for me to shoot you over and over. As I once again said I was going to call the police, like so many abusers, you called first. I don’t remember hitting record on my phone that night but there was a higher power looking out for me. For the 3 months leading up to this incident I had been recording our arguments. Not so I could use them against you but for me to have something to refer back to whenever you made me question my sanity. I was trying to gather the strength to end our relationship.

After that night, I couldn’t eat or drink for almost 3 days causing me to lose over 10 pounds in just those few short days. I was afraid to go home because the media had already been made aware and I didn’t want my children to have to endure more public scrutiny.

I’ve lost consulting jobs because of these issues and forced me to use my savings to pay my bills since the incident. I had to move from the condo I was renting because I feared for my life and what you might do to me.

In the end, you won’t face a jury and because of your 27 years as a firefighter, I’ve been told you most likely won’t serve any time. You retired with over $340,000 in your retirement account and will collect $75,000 dollars a year for the remainder of your life with health insurance. You’ll have no problem moving to the other coast and blending in and living life as if nothing ever happened. As for me…I’ll continue to live with a friend until I can repair my damaged reputation and public perception to where I can finally begin digging myself out of

financial ruin. As a result of your abuse, you’ve left me depressed, ashamed and unable to work for the last several months. I get very little sleep without the help of medication and now sleep with my concealed weapon within reach. I’ll continue to build back my self-worth and release myself from the shame of what I’ve went through when people point or stare at me in public. Once a very extroverted woman, I find myself scared to go to public events that you may be there or that I will be confronted by people who want nothing more than to victim blame me into hiding. I someday may find someone who can accept my painful past. None of this though will happen soon. What you stole from me can never be replaced. Those memories of your abuse are forever engrained in my mind and I have no doubt will effect any relationship I have going forward. I’ve lost friends and you’ve helped to create an even wider gap between my parents and I.