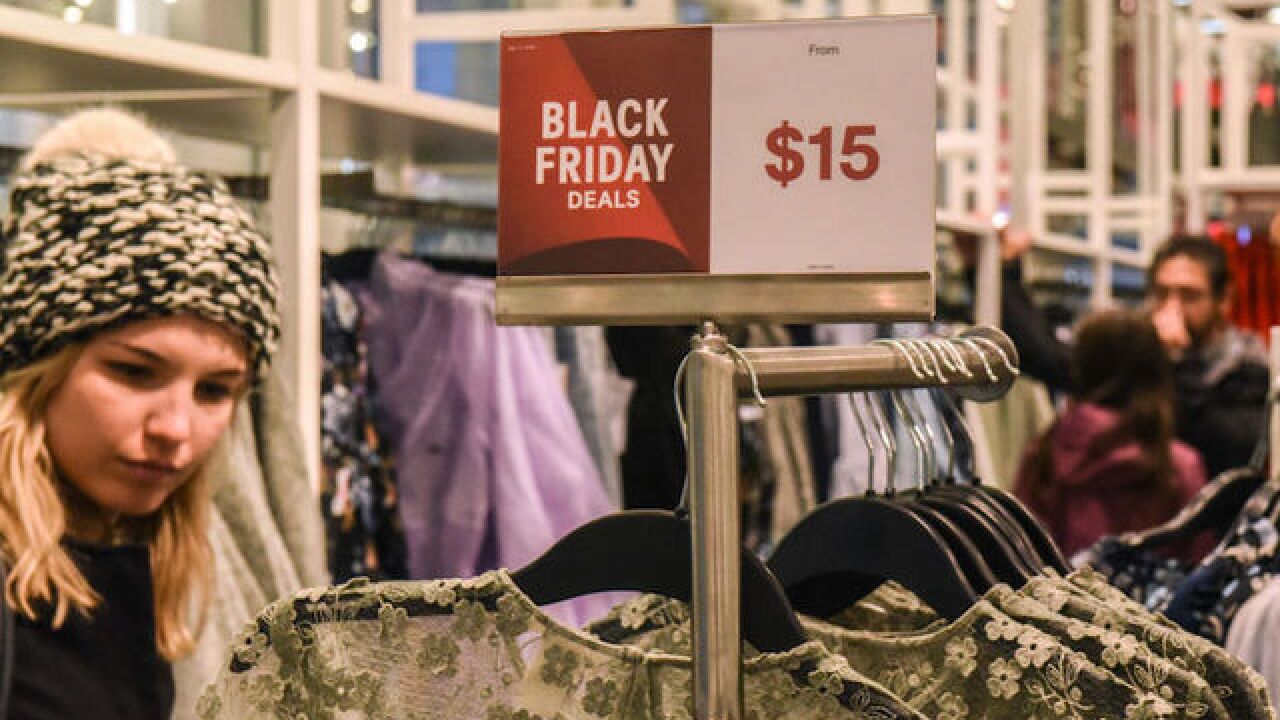 Image copyright 2017 Getty Images. All rights reserved. This material may not be published, broadcast, rewritten, or redistributed.
Stephanie Keith
<p>People shop at an H&M store on "Black Friday" on November 24, 2017 in New York City. </p>

With huge sales at nearly every retailer, Black Friday — the day after Thanksgiving — has long been touted as one of the best times of the year for buying just about anything.

But it won’t be all discounts and deals during the 2018 post-Turkey Day shopping bonanza. Use this guide to steer clear of the duds and get only the best bargains this Nov. 23.

Traditionally, major retail stores such as Best Buy, Target and Walmart discount Apple products each year on Black Friday, and previous-generation models usually see the most dramatic deals. These offers may include price cuts, free gift cards with purchase or a combination of both. This year, look for deals on MacBooks, iMacs, iPhones, iPads, Apple Watches and Apple TVs.

Toys are one of the seasonal purchase staples, but you might want to think twice before checking them off your list on Black Friday. Historically, it’s best to wait until closer to Christmas to purchase dolls, action figures and play sets. You run the risk that certain items will sell out, but you may also be able to find bigger savings on what’s left.

In past years, select toys have been on sale for as much as 50% off in the final days before Christmas.

Black Friday is for gamers just as much as it is for shoppers. This year, look for savings on video games and video game systems from retailers such as Best Buy, Walmart and GameStop. Last year, Best Buy sold the Microsoft Xbox One S 500GB console for $189.99.

You’ll also find particularly great offers on gaming bundles. Traditionally, these include the game console plus a combination of accessories and sometimes games.

You’ve likely seen the blowout post-Christmas clearance sales every year on Dec. 26 as you made your way to the store to return that gift that missed the mark. That’s when Christmas decorations, wrapping paper, tinsel and other seasonal trimmings reach super low prices (for obvious reasons).

If you can’t wait until after Christmas, hold off for a little while. Sure, you’ll see plenty of deals on artificial trees and rolls of wrapping paper on Black Friday — especially at home and craft stores — but retailers are particularly eager to slash prices closer to Dec. 25.

No matter where you choose to spend your Black Friday (or Thanksgiving), you’re almost guaranteed to find TV doorbusters. Other electronics deals to keep an eye out for are tablets and smartphones. Last year, some retailers offered free gift cards (in amounts as substantial as $250) with a qualifying phone purchase on an installment plan.

You’ve got the entertainment center covered, but you should hesitate before stocking up on supplies to refresh the look of your bedroom this Black Friday.

The lowest prices on bedding and linens have been known to appear in January during what are called “white sales,” so hold off until then if you can. Discounts at this time can hit 70%. January 2018 white sales took place at retailers such as Overstock, Pottery Barn and Sears.

If you’re in need of some affordable stocking stuffers, look no further than the video game, CD, DVD and Blu-ray department at most major retailers this Black Friday.

You’ll find films and gaming titles deeply discounted from their original prices. In 2017, Walmart had select DVD titles for $1.96 apiece.

You won’t see too many grills or patio furniture sets plastered on the front pages of Black Friday ads this year. That’s because, not surprisingly, outdoor products and patio furniture are deeply discounted immediately after summer ends.

If you didn’t pick up these products at the close of this summer, wait until Labor Day sales roll around next year. Can’t wait until then? Another viable option is the Spring Black Friday Sale that home improvement store Lowe’s usually holds each year.

No secret here. Black Friday is well-known for its offers of huge savings on washers, dryers, refrigerators and major kitchen appliances. Look for similar deep discounts again this year.

Last year, J.C. Penney took up to 40% off select major appliances. Best Buy, too, offered up to 40% off appliance top deals. The retailer also gave away a Samsung Powerbot vacuum and $100 Best Buy gift card with qualifying appliance purchases.

If you’re in the market for smaller appliances such as coffee makers, mixers, blenders or vacuum cleaners, expect deals this year from department stores such as Kohl’s and Macy’s.

Of course, if you need something to keep you warm before then, you’ll be able to find some bargains this Black Friday. Year after year, department stores have offered doorbuster deals on women’s boots. In the past, select pairs have been just $19.99 each.

Whether it’s hotel rooms, ski lift tickets or airfare, you can expect bargains on travel this Black Friday and Cyber Monday (Nov. 26). Check for deals from online travel sites and major airlines. In the past, most of these promotions were available for a very limited time. You’ll likely have to book during that window and travel during an allotted period.

If you want to avoid some of the hassle related to Black Friday shopping, resist deals that require a mail-in rebate. Unless you’re disciplined enough to fill out the form and wait to receive the rebate, you could end up paying more than you intended. And even if you do follow through with a rebate, you’ll have to shell out a higher price at the register before getting some money back.

Finally, for the ultimate combination of convenience and savings, spring for online doorbusters this year. Plenty of big-box retailers will be bringing their doorbusters online this Thanksgiving and Black Friday.

That’s good news for shoppers. But you have to take precautions when shopping on your phone or laptop, such as making sure you’re not on public Wi-Fi.

The article What to Buy (and Skip) on Black Friday 2018 originally appeared on NerdWallet.