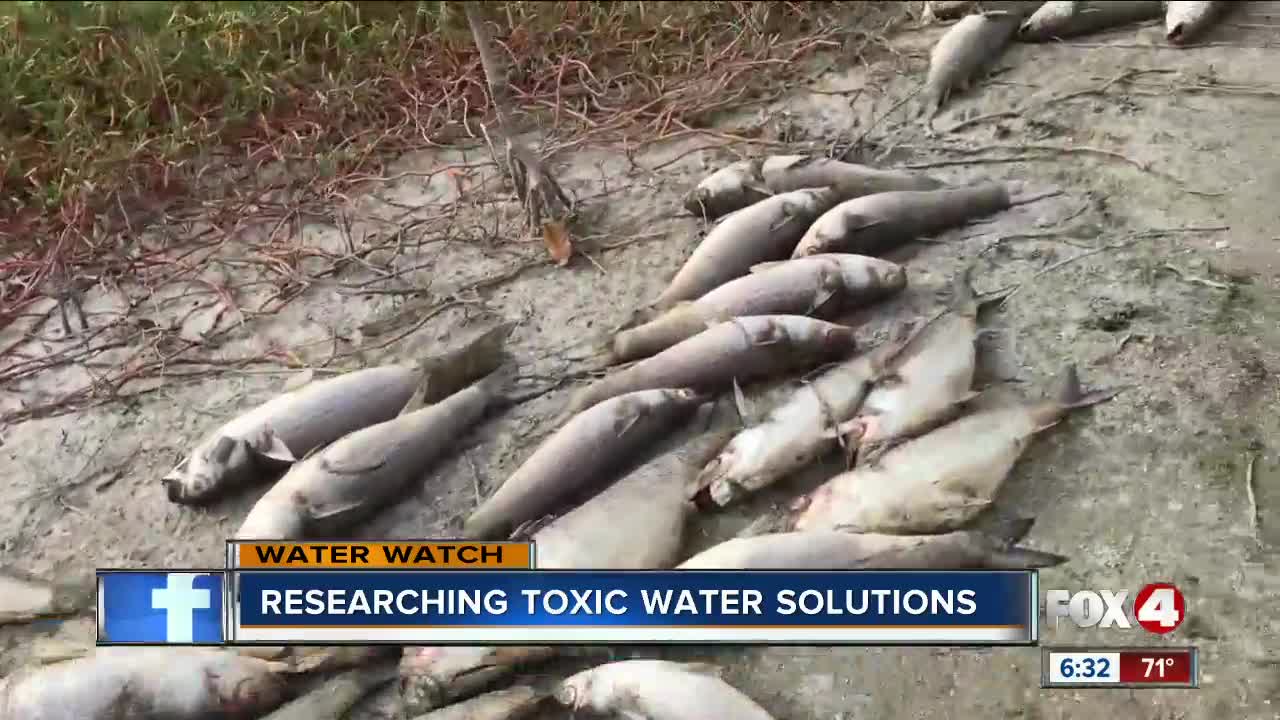 Acres and acres of thirsty sugarcane drink from the same watering hole that fouls our beaches, the same water source that also makes Florida an agricultural powerhouse.

Acres and acres of thirsty sugarcane drink from the same watering hole that fouls our beaches, the same water source that also makes Florida an agricultural powerhouse.
Lake Okeechobee is big - it's very big. You can fit 18 Disney Worlds inside of it. It's also in the bull's eye of the power struggle between the state's agriculture and tourism industries.

The nearly 90-year-old Herbert Hoover Dike is the plug that keeps Lake Okeechobee in place. I walked along the top of it with Peter Girard. He is with the environmental group 'Bull Sugar'.

"No one gives more money to political candidates in this state than the sugar cane industry. If you want to run for office in this state it is almost impossible to do it without their support," Girard said.

Water in Florida naturally flows south, brushed clean by the everglades and then out to sea. That natural flow was halted when the dike was built. The flow was again transformed when the meandering Kissemmee river north of the lake was straightened - sending water gushing into the lake along with fertilizer, animal waste and toxins from dairy farms and homes south of Orlando.

Out in the middle of the lake on a late August afternoon we see no green algae. A far cry from mid-summer when 90 percent of the lake was covered with it. The lake is a fishing guide to Leo Doran's child. He's out on it almost every day and like a doting parent can gauge its mood.

Seven hundred thousand acres of land south of the lake is used to grow sugar cane, winter corn and vegetables. When the heavy winter rains come water is pumped off that valuable farmland and back into the lake along with the fertilizer, pesticides, and other toxins use for growing.

This witch's brew, along with the fierce summer rains, fill up the lake in a hurry, which means it needs to be flushed into the Caloosahatchee and St. Lucie rivers. There are all sorts of claims and counter claims and fingers pointed in every direction, but there is one indisputable fact -- what is released here - ends up here.

William Sawyer, a toxicologist, is an expert in the field and said that it's like putting fertilizer in a pot. Aside from the nutrients and toxins ending up in our coastal waters and eventually in U.S.

"It's accumulating in shellfish. It's creating an aerosol into the air because of the wave action, which we inhale. It's highly neurotoxic and it can even be fatal," Sawyer said.

Chris Wittman, the co-founder of 'Captains for Clean Water', said the dense algae blooms and supersized red tides have cost the recreational fishing industry on both coasts hundreds of thousands of dollars.

"We can have bad water this year and lose visitors...and our water can be nice for the next five years but we are still not getting them back because they had that one bad experience," Wittman said.

So what solutions do we have to work with? In my investigation I found several, but sadly not one which can satisfy all the competing interests. Something or someone will suffer for the rest of us to benefit.
First suggestion? Drill wells north of the lake to drive water headed south from Orlando three thousand feet into the ground.

Environmentalists say that could stir up dangerous arsenic, polluting the water table. The second is an idea that is already underway, build a series of small reservoirs south of the lake to store the overflow. Problem with that? Sooner or later that untreated water has to be released somewhere and our rivers are the easiest outlet.

Third, return the water to its natural flow. This is simply not doable, because that would flood thousands of acres of farmland and small towns south of the lake. Th he kind of flooding that led to the construction of Lake Okeechobee in the first place.

Finally, have the state buy up thousands of acres of land from growers and build a meandering river south of the lake that would send water through a natural environment cleaning it as it goes. This suggestion is something that was all but a done deal in 2008, but then the great recession hit and it was put on hold.

U.S. sugar is based in Clewiston, and it is a huge donor to campaigns throughout the state. I requested an interview with the CEO Robert Buker several times, but was told he was too busy to sit down for 15 minutes. So, we went looking for him.

However, Buker has been quoted on the subject, and most recently in a news-press based in Fort Myers.

"Lake Okeechobee discharges are about 30% of the water that flowed down the Caloosahatchee this year. Water from our sugarcane south of the lake is only one percent. The rest is local run-off from lands along the river. There is a real problem but our water is not the reason."

That's where the money comes back in. Ray Judah is an environmental scientist. The tourism industry, which generates more than ten times what sugar makes a year. Judah said campaigns are driven by cash, and sad as it may sound - if the tourism industry wants a place at the table it should start organizing.