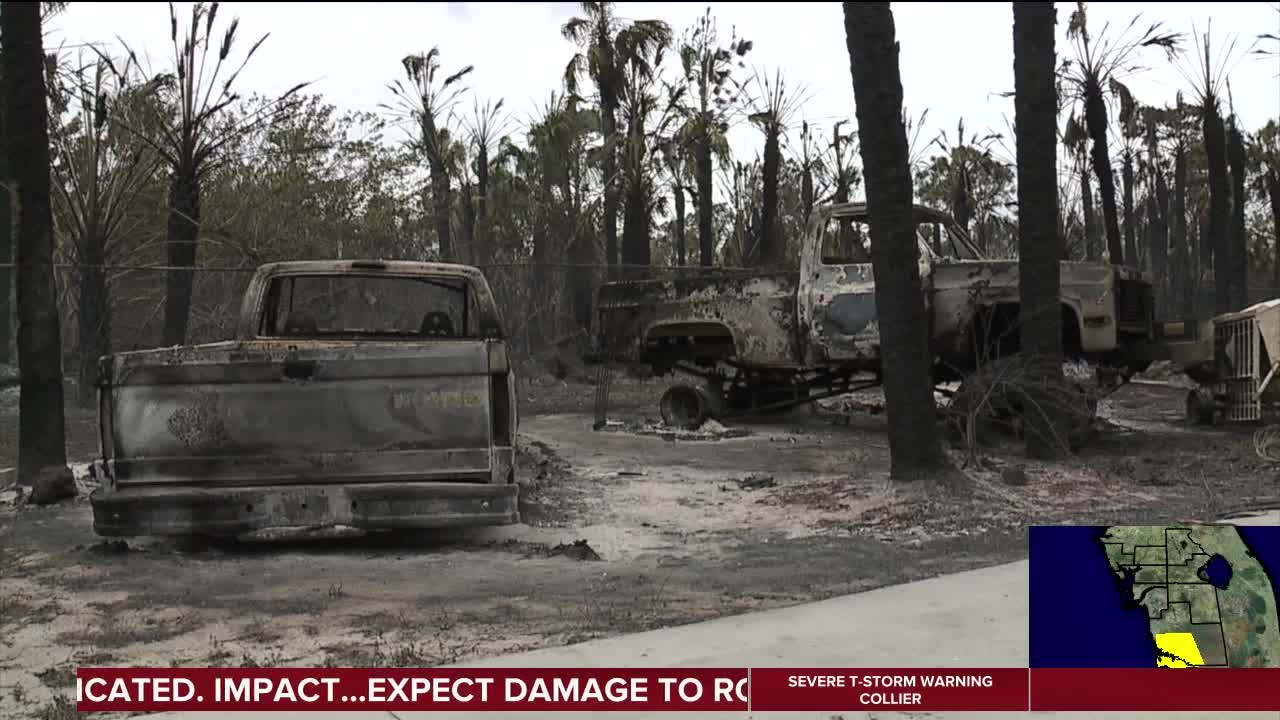 What had started as two separate wildfires, last Wednesday quickly merged into the massive brush fire in Collier County.

The fire has destroyed at least 12 homes and 33 outbuildings.

Officials say people who live in the affected areas of Collier County can expect to see a lot of operations still underway as crews continue to improve fire lines and monitor hot spots.

"We are at the hight of our fire season," said Agriculture and Consumer Services Commissioner Nikki Fried during a press conference Monday.

'Reburn' is when trees that were affected by the fire, but not completely burned, will drop their remaining leaves and needles as they begin their recovery process. The needles and leaves could land in lingering hot spots that are inside the fire lines, causing a flare-up.

"When we say the fire is 50% contained, there's still a significant amount of work that needs to be down to improve these lines, to ensure that they're actually safe and we can call them contained," said Sean Allen, FFS Caloosahatchee District Manager.

"As we widen those lines and look for these hot spots, the threat is going to still be there, and until we can successfully say that the threat has been reduced is when we'll see that containment bump up," Allen added.

While crews have made significant progress, Commissioner Nikki Fried says this is 'definitely' not the time to let your guard down.

"Lake Okeechobee's levels are below 11, so you have to know at that point how much drought is in this area," said Commissioner Fried.

"Until we get a significant amount of rain, our drought index is going to remain high, and fuels are going to remain very volatile and ready to go at any time," said Allen.

As Southwest Florida continues to be in a drought, Commissioner Fried says people should be ready for an evacuation order at a moment's notice and need to follow it.

"If you think you're going to defend your home with a firehose from your lawn, you are gravely mistaking. Your life is much more important than that of your house," said Commissioner Fried.

Crews will continue to monitor hotspots for the next several days.

Another thing officials are keeping an eye on are potential thunderstorms, as those can quickly start a brush fire as well.