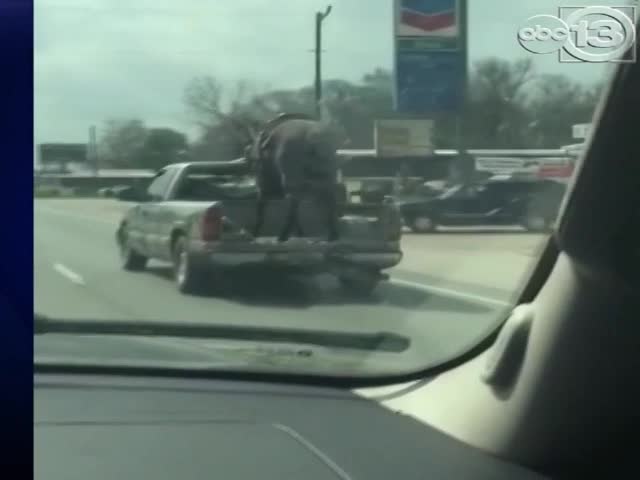 You're used to seeing horses at the rodeo, but not on the road.

HOUSTON, Texas -- You're used to seeing horses at the rodeo, but not on the road.

A Texas woman caught an unbelievable shot on camera: a horse riding in a truck bed, apparently at a high speed.

One witness claimed the driver was going 70 miles an hour on highway 59.

“Not the best scenario, but sometimes you gotta do what you gotta do," says Ami Parbs, who owns about 80 acres near Lufkin with her family and have mini horses of their own.

“The horse did not look spooked, he looked healthy, actually he looked like he was enjoying the wind blowing in his mane. The only thing I wish he'd done differently is put the eye covers on."

Another driver captured a still picture near Corrigan and claims the truck was going about 70 miles per hour.

Corrigan police say the man wasn't doing anything illegal in the transportation of the horse that surprises many.

About sixty miles away at the Houston livestock show and rodeo, some exhibitors and their families have an issue with that.

"I wouldn't do that with a dog. Put it in the back of a truck on a highway with a bed down like that. Not a horse," says Waverly Bailey.

"It's unsafe. It's unsafe because you don't know what the horse is going to do. That's the thing. He's so big over the sides," says Donna Skura.

Ivy bailey shows her horse Tequila and can't imagine anything like it. "They shouldn't transport the horse unless they sign something saying they won't do that again."

Police say the driver was on his way to work at the stockyards. He claimed his truck that can pull the trailer wouldn't start so he did this as an alternative.

A move that makes some angry while others are understanding. "I don't know the gentleman that was driving the truck, but that may have been his only way to transport a horse that he just picked up," says Parbs.

Police say the horse is now safe at the stockyards.