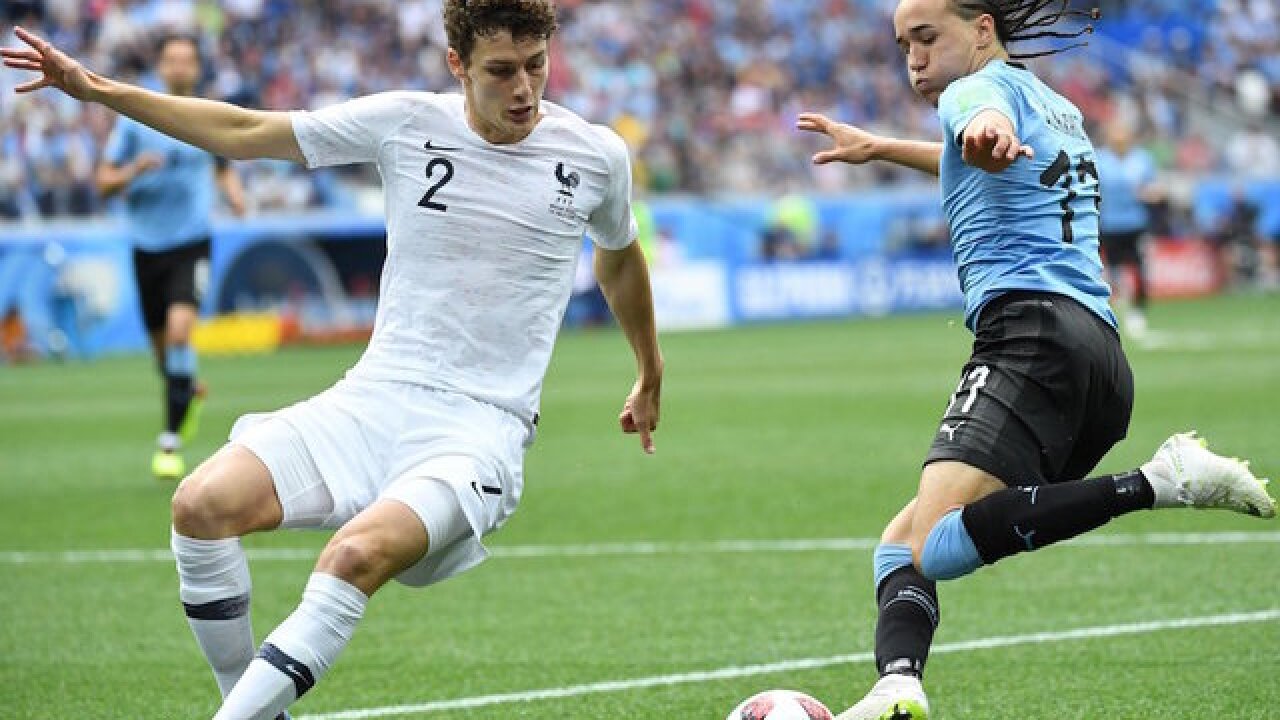 The first quarterfinal of the 2018 World Cup turned out to be a tale of two goalkeepers, as Fernando Muslera's second-half howler gifted France the decisive goal in an ultimately comfortable 2-0 victory.

With his side already trailing, the Uruguayan number one fumbled a long-range effort by Antoine Griezmann and could only watch on in horror as the ball dropped over the line.

Hugo Lloris, conversely, was in inspired form, pulling off a stunning save to deny Martin Caceres just minutes after Raphael Varane had given France a first-half lead.

France now advances to the semifinal stage where it will meet either Belgium or Brazil.

While the result in Nizhny Novgorod was never in doubt after Griezmann's 61st minute strike, things were far from simple early on for Les Blues.

It took less than two minutes for José Giménez to plant his studs on Olivier Giroud's heel as Uruguay set an aggressive tone.

Mbappe, the star of France's last win over Argentina, had the first chance of the match but seemed unaware of the acres of space around him in the box and rushed a poorly executed header.

France's poster boy, however, is Antoine Griezmann and the forward enjoys a close relationship with the two defenders tasked with keeping him quiet in Friday's quarterfinal.

Defensive duo Giminez and Diego Godin are teammates with Griezmann at Atletico Madrid. Godin is even the godfather to Griezmann's daughter.

But club connections and close friendships were put to the side as the Atleti striker helped France into the lead.

Griezmann's clever free-kick into the box, stuttering first to pull Uruguayan defenders out of position, was met by Raphael Varane who glanced his header past Fernando Muslera and into the far corner.

Usually so adept at set pieces, both in defense and attack, Varane's strike marked the second consecutive game in which Uruguay had conceded from a dead ball situation.

But for a stunning save at full stretch from Lloris just minutes later, Uruguay would have been level.

Caceres got a powerful header onto Lucas Torreira's free-kick but the Tottenham goalkeeper produced one of the stops of the tournament to keep his side in the lead.

The absence of injured striker Edinson Cavani was proving to be a real blow for Uruguay, who lacked the cut and thrust that his thrilling partnership with Suarez provides.

For all stand-in partner Cristhian Stuani's hard work and willing running, the Girona striker was providing far less quality in the final third.

Though Uruguay was thoroughly outclassed throughout, while the score remained 1-0 there was always a slim chance of finding the equalizer.

Any remaining hope, however, was extinguished 15 minutes into the second half.

Griezmann's shot from 30 yards, though it was true and sweetly hit, was straight at Muslera. But the goalkeeper inexplicably moved out of the way and spilled the ball into the net.

That error sapped the belief from Uruguay's players, as several sank to to their knees as the ball floated agonizingly over the line.

All France had to do after that was keep their cool to ease into the semifinal, which they duly did.