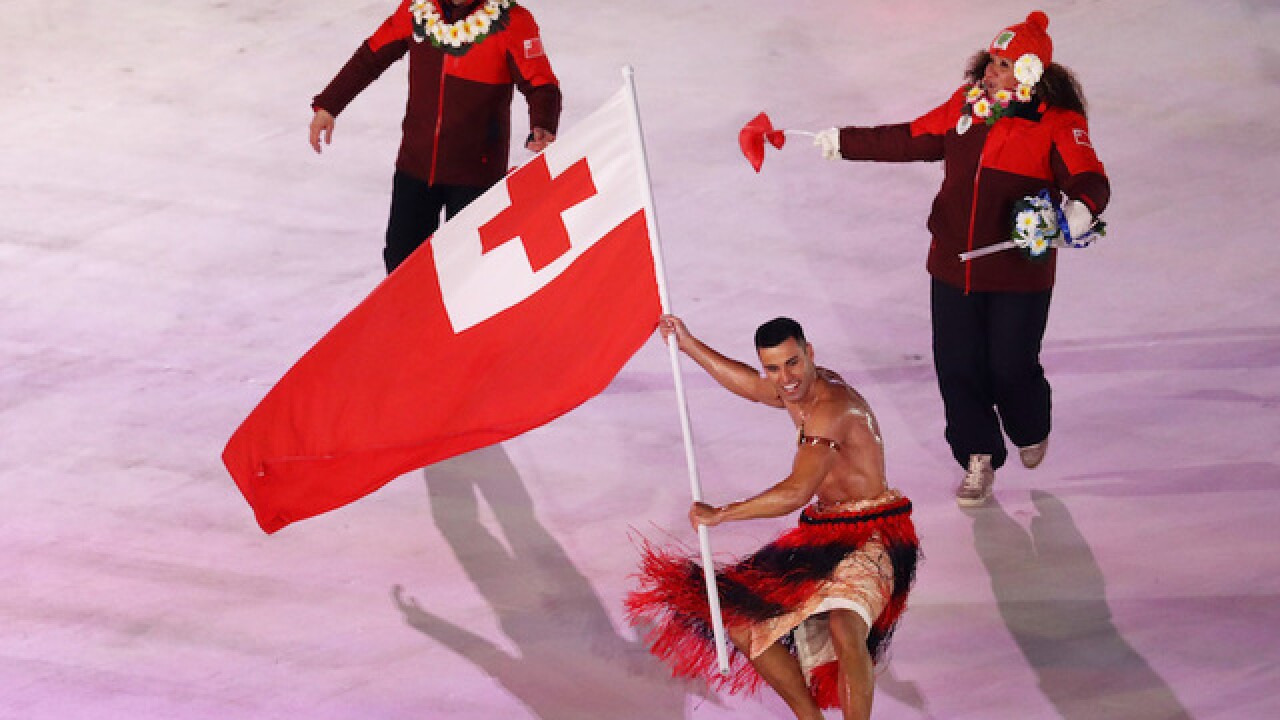 Walking out into Rio de Janeiro's Maracana stadium, his bare, muscular torso glistening with a generous amount of oil, Pita Taufatofua's life changed in an instant.

It's fair to say his life hasn't been quite the same since.

But of the millions watching around the world, few had any idea of the sacrifice and determination behind Taufatofua's dream of becoming an Olympic athlete.

"It's quite funny because that moment was a really big thing, but it was 20 years of hard work behind that moment just to actually get there," Taufatofua told CNN ahead of the start of the Winter Olympics.

The Tongan braved freezing cold conditions at the Opening Ceremony on Friday to repeat his star turn, waving his country's flag with his torso again liberally oiled.

"It certainly changed my life in many, many different and interesting ways."

Now, not content with being the first person to represent his country in taekwondo at an Olympics, Taufatofua is taking part at the Winter Games in PyeongChang as Tonga's first cross-country skier.

And with only about three months' experience on snow.

Born in Australia but raised in Tonga, Taufatofua announced his plans to try to qualify for the Winter Olympics' "most difficult sport" in December 2016.

Ahead of his first ever race, he had clocked only four weeks of training on snow.

"When you've got no snow, it's really hard to learn a snow sport so we looked at all the different ways I could mimic being on snow without actually being on snow," he said.

"We found roller skis, I'd strap planks of wood to my feet and run on the beach, just to try and find that balance point, and I'd watch a lot of YouTube and see what the professionals were doing, and I'd try and mimic that mentally in my head."

A wry smile creeps across Taufatofua's face at the mention of roller skiing -- "quite possibly the worst thing ever invented," he says.

"It's kind of like roller blading but not," he says. "Roller skiing, you can't stop, the only way to stop is to fall and I learnt that the hard way many, many a time."

After his first race, qualification for the Winter Olympics seemed a long shot.

Taufatofua exceeded his own expectations, but even the ultra-confident Tongan momentarily allowed doubt to creep in.

"I was so far behind all these professional skiers that I thought: 'wow, this is so hard, what have I gotten myself into?'"

Aside from trying to come up with the money to fund expensive skis -- Taufatofua has been using rentals for the last year -- plus flights and travel costs, the biggest challenge has been losing weight.

Standing at more than 6 foot 3 inches, Taufatofu tipped the scales at 100 kilograms in Rio. He has since lost 15kg of fat and muscle, although he still weighs at least 20kg more than his competitors.

But of all the difficulties in trying to master a new sport inside a year, nothing could have prepared him for his last race in Iceland in late January -- his final chance at qualifying for PyeongChang.

"Yona from Chile, he's this military guy and he's like, 'You know what? We have to just go through the blizzard,'" Taufatofua says. "And so we end up driving for two days trying to get through this blizzard.

"We go eight hours, then we have to come back and try again but we had calculated exactly where those avalanches were and they were 20 kilometers out from the race.

"So we thought that if we could get to where they had blocked off the road, leave the car there and then hike, we could hike 20 kilometers through this blizzard to get to this race, it was our last chance.

"Luckily, on the third day we tried to get through, the roads had just been cleared so we managed to get on through and get to that last race."

His determination paid off, and with his final result and ranking points from roller skiing races, Taufatofua did enough to qualify for the Winter Games.

"The dream this year was to qualify and to qualify in the year, that was the impossible dream -- I guess I'm going in without pressure," he says.

This time, though, he plans to keep his torso under wraps.

"I want to make sure that I can at least make it to my race and that I'm not frozen to death, so I have to stay warm at the opening ceremony."