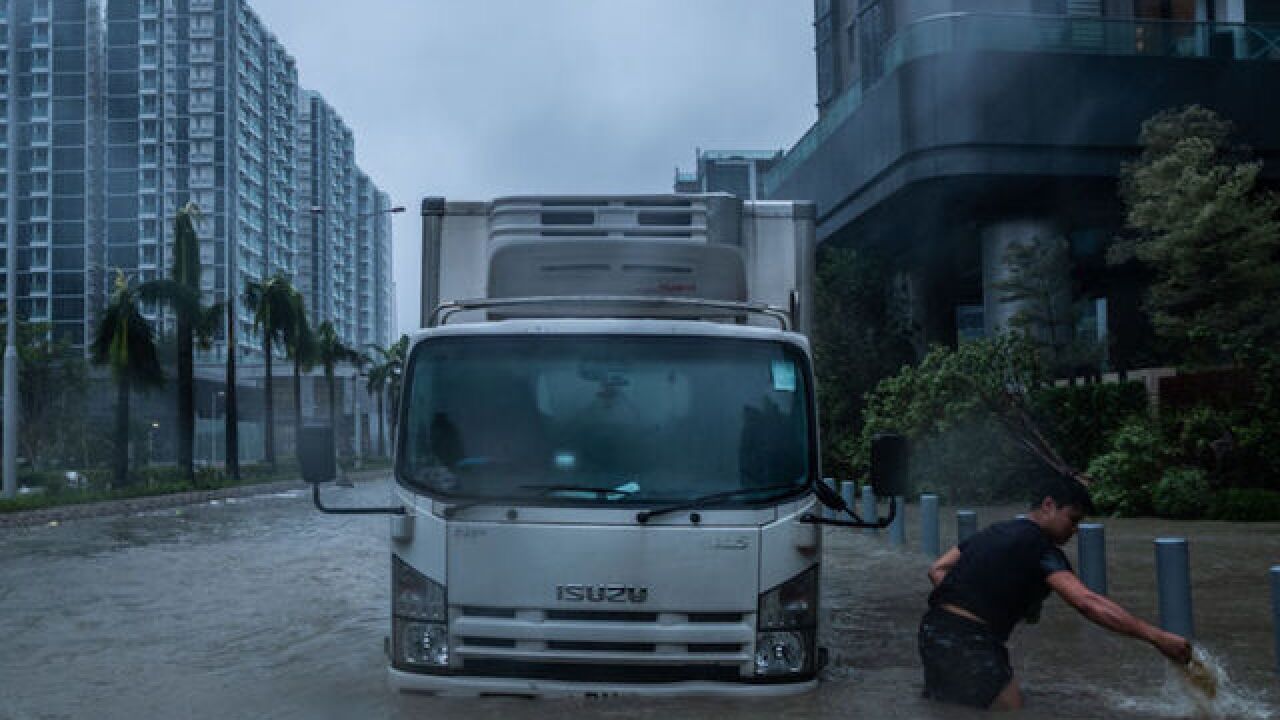 Image copyright 2018 Getty Images. All rights reserved. This material may not be published, broadcast, rewritten, or redistributed.
Lam Yik Fei
<p>Flooded road is seen on September 16, 2018 in Hong Kong, Hong Kong. City officials raised the storm alert to T10, it's highest level, as Typhoon Mangkhut landed on Hong Kong. The strongest tropical storm of the season so far, with winds as fast as 200 kilometres per hour, Mangkhut has reportedly killed dozens in the Philippines as it continues it's path towards southern China. </p>

More than three million people have been moved to safety in southern China as Typhoon Mangkhut moved northwards and continued to wreak havoc across the region.

The decision to evacuate towns and cities in southern China came as Hong Kong was left reeling by ferocious winds of up to 173 kilometers per hour (107 miles per hour) and gusts of up to 223 kph (138 mph).

The storm tore off roofs and scaffolding from skyscrapers, shattered windows, shook high-rise buildings and caused serious flooding in low-lying areas as waves of more than three meters (9.8 feet) lashed the coast.

Though Hong Kong managed to avoid the same fate as the Philippines, where at least 54 people are believed to have died in the storm, damage to the city was extensive.

On Monday morning, in the neighborhood of Heng Fa Chuen, downed trees, some ripped up by their roots, blocked roads and footpaths, while uprooted bricks from the sidewalk lay everywhere. A school minibus sat on the roadside, smashed by one uprooted tree.

Residential towers in the neighborhood were without water and electricity. Four large tanks of clean water had been provided for residents to bring up, but with the elevators out of service they needed to carry them up stairs, as high up as 22 floors above ground level.

In the seaside village of Shek O, 65-year-old Betty Tsang left her small, purple beachfront home that she has shared with her sister for 60 years as the storm approached.

She spent the night with her dog in a typhoon shelter. When she returned, the entire house was flooded with saltwater, she told CNN while fighting back tears.

"I will come back and live here," she said. "I need to move all the stuff out but I'm not sure how to start."

Save for a few pieces of clothing, almost none of her belongings were spared.

Ben Lau, whose sister owns a beachside bar in the village a few feet down, sat and drank wine from the bar's surviving stock as he surveyed the damage -- the interior of bar was completely destroyed by the storm Sunday. It will be at least three months before it can reopen, he estimates.

On a nearby golf course, boats, which had been unmoored and swept inland by the storm surge, lay on the fairways.

A former elementary school that was being converted into a library collapsed during the storm, residents say.

In Hong Kong's business district, a set of stone steps dating back to the late 1800s, which featured the city's only remaining working gas lamps, were heavily damaged by a tree brought down by Mangkhut's heavy winds.

On Monday morning, the suspension of rail and bus services due to fallen trees and other debris forced thousands of workers onto the city's subway network. The result was chaotic scenes as large crowds packed onto platforms, creating long lines of up to 45 minutes in some stations.

As many as 391 people in Hong Kong sought medical attention Sunday during the storm, according to the local city government. Over 1,500 people sought refuge at temporary shelters. Schools remained closed but many businesses had reopened, despite widespread debris still awaiting cleanup.

Along the coast, the former Portuguese enclave of Macau, now famous for its casinos, was also shut down as it weathered the onslaught. Last year, 10 people died and more than 200 were injured during Super Typhoon Hato, according to official figures.

This year, the city breathed a sigh of relief as the storm passed without any reported causalities.

On Monday, the cleanup was well underway, with workers spraying disinfectant as bags of trash were

Cleaning up after Sunday's deluge, a storekeeper named Hui said he and his staff had spent Friday and Saturday moving their goods to the upper floors of his dry goods store on Rua Da Praia Do Manduco, in one of the poorer districts of Macao.

Sweeping the water out of his shop, he said the flood had reached about three feet at its worst -- not as bad as last year's storm, which saw floodwaters reach as high as five feet in his store. He said they hadn't yet calculated the damage but it would be less than last time.

On the Avenue dos Jogos da asia Oriental, a major highway in the enclave, a giant sinkhole caused by the incessant heavy rain opened up. A hole in the concrete could possibly have eroded the soil from underneath, a worker on the scene told CNN.

Some shops close to the waterfront were still pumping water out of their flooded basements on Monday. A worker in a household goods store, whose lower floor was a jumble of water and plastic goods, said they expected it would take them days to count the cost.

Worst hit by far was the Philippines, where at least 54 people were killed when the violent, then-super typhoon -- known locally as Ompong -- cut a swathe through northern Luzon.

The storm caused flooding and landslides on Luzon, particularly in the town of Itogon, Benguet, where landslides have killed at least 35 and left dozens missing, many of whom are believed to be buried under thick mud.

Search and rescue operations were underway at the site.

The country's president, Rodrigo Duterte, is due to make an official visit to the affected region, state media PNA reported.

He urged rescue and relief teams to ensure that normalcy was restored "as soon as possible," directing an immediate start to rehabilitation and repair projects in the areas hardest hit by the storm.