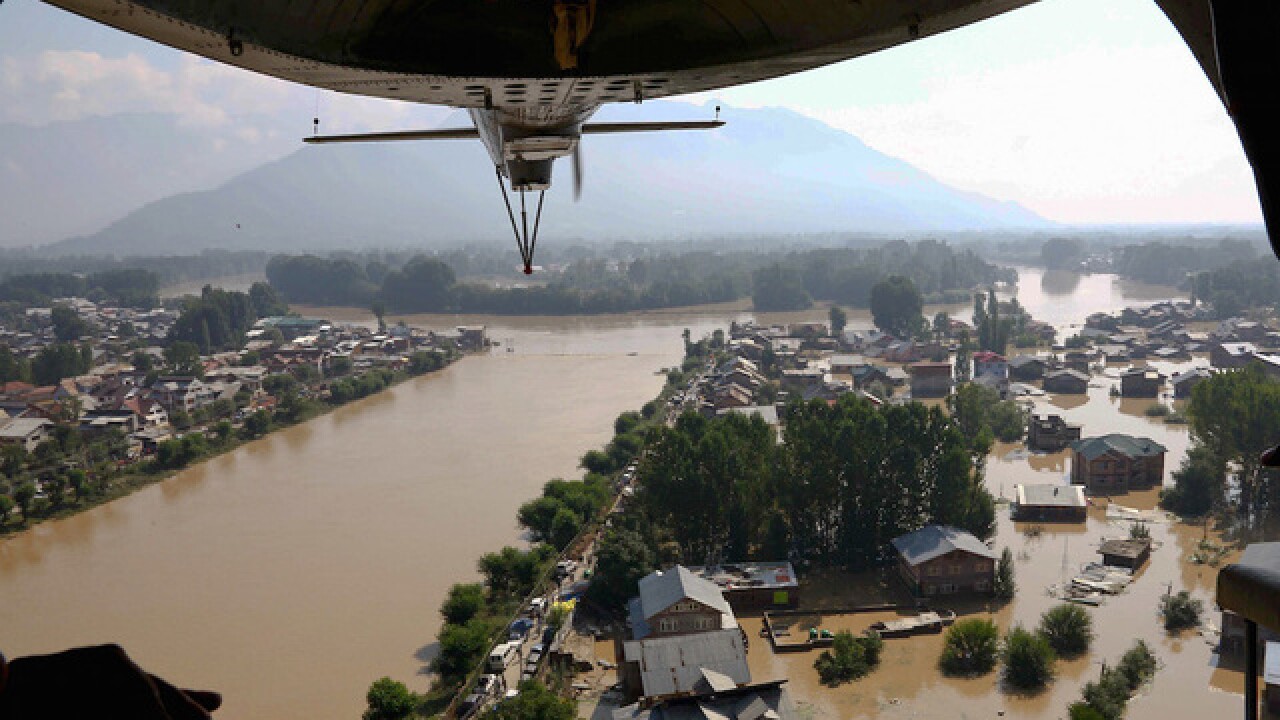 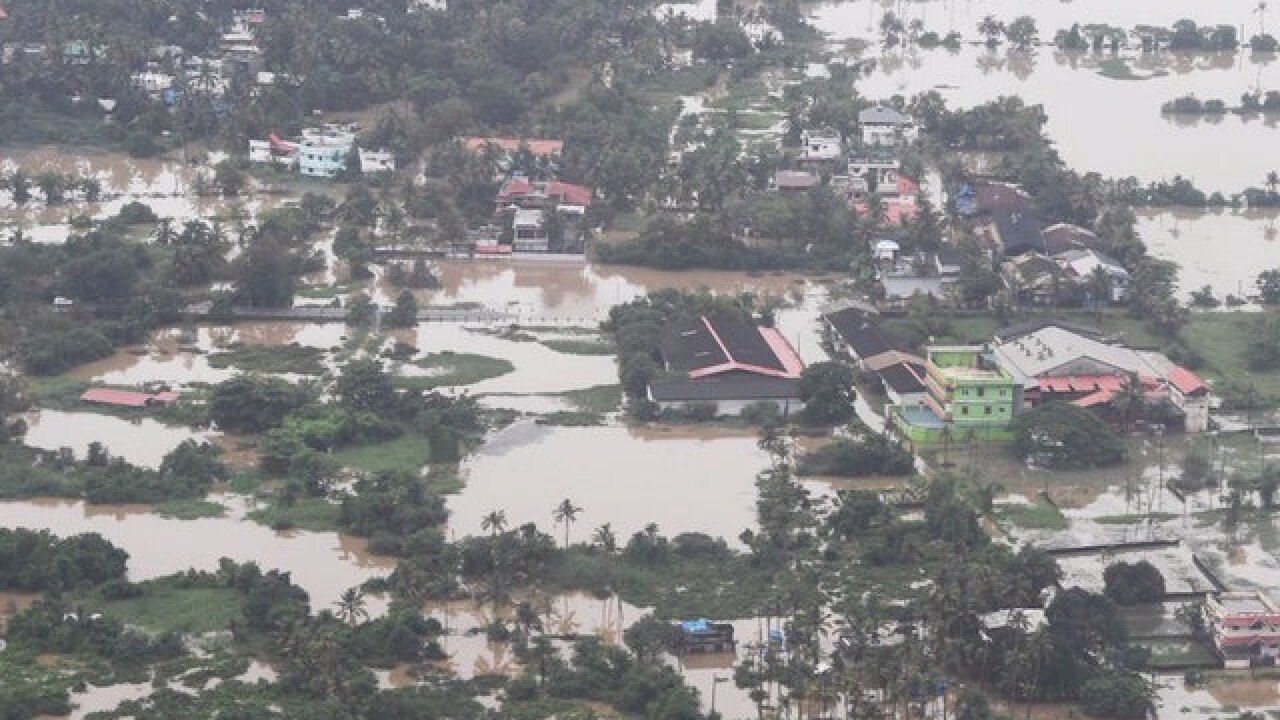 Dharamvir Singh is the leader of a team of six men tackling their latest tough assignment in the flood-ravaged southern Indian state of Kerala.

Their mission is to safely evacuate stranded residents and to deliver supplies to desperate flood victims who have been without food and clean water for days.

Singh holds the rope of an inflatable orange dinghy as the team makes its way through a stew of river water and sewage that's now become a cesspool of infection.

His team draws on years of training as they navigate the dinghy through narrow streets that are filled with up to six feet of filthy water.

"Rescuers have to become friends with water. Otherwise they can't rescue anyone successfully," said Singh.

In the small town of Peringara, in the Thiruvalla district, water flooded hundreds of houses with no warning Wednesday. Banana trees are split down the middle and their leaves float forlornly in the water, walls have crumbled and cars filled with water are sitting abandoned in the streets.

Ground floors flooded in an hour

"In the morning water started coming in. The water was [up to] our necks. We could not even collect our belongings," said Girija, who goes only by her first name.

In one hour, water filled up the ground floor of most houses in the town. People scrambled to get onto the first floor, if they had one or the roof. No one in the town remembers a flood like this.

By Thursday, locals began navigating through the water looking for people who may need to be evacuated.

Prashant M. built a makeshift raft out of the trunk of banana trees lashed together with ropes. Volunteers pulled the raft along carrying big steel or plastic water tubs. Each could hold two or three people.

"We have a big pot. They sit in it and on the raft and as we wade through the water, we pull them behind us with ropes," said Prashant.

By the next day, the NDRF team had arrived in the town. Their first assignment -- locate an elderly man locals said was in the middle of nowhere and deliver an oxygen tank. It was 2:30 a.m.

"He was on his last tank and running out of oxygen. We had to reach him somehow," said Singh.

It took the team hours -- but they reached him in in time.

Inflatable craft the only option

Dozens of teams like Singh's have been deployed across the state over the last few days. In areas that are inaccessible by foot or by air, inflatable dinghies are the only option.

The men locate a safe spot and begin inflating the small boats. They are equipped with a motor that works only if there is more than four feet water. For water below that level, the men leap out of the dinghy, grab ropes and start pulling it along.

Kerala is a state filled with rivers. Usually, those rivers provide it with a natural beauty that inspires millions of tourists to visit the land, commonly known as, "God's own country."

Today, those same rivers have ruined hundreds of thousands of homes and claimed more than 230 lives in less than two weeks.

The swollen waters have spilled out into fields and playgrounds. It is hard to differentiate where the roads end and the rivers begin, except when the men shout that the water is deep and they slip and slide into the dinghies, with palpable relief on their faces and start the motor. This gives them a few minutes of respite before the dinghy scrapes against a speed bump or the road and the laborious process begins all over again.

Singh and his team have been navigating through the waters and take the help of locals who point out the best way forward -- a way where there are no fallen trees, no barbed wire guarding the fields and most importantly, no strong currents.

At one point, the tiny boat swings madly as water rushes out of the river and is sucked into a low-lying street on the other side. Singh throws a foot at the wall, trying to stabilize the boat and flips over into the water. His men shout and he emerges, soaking wet but still issues instructions as he draws deep breaths.

Mission worth separation from family

It is a hard job that requires physical strength and perseverance, something these men do not lack. Working through floods across India over the past seven years, Singh loves being on duty. He considers himself lucky.

Every year, he operates in flood-hit areas for a few weeks, separated from his wife and two children. His mission makes it worth it, he said. Saving lives is not the usual government desk job, he added with a smile.

The team reaches a local health center located deep inside the town. More than 100 people have sought refuge there with a few belongings. The smell of disinfectant, stale water and disease lies heavy in the air.

There is no bathroom, there is no clean drinking water or sanitary pads for women. A group of women dressed in nighties stand and cook rice soup for everyone.

The team carries six people in need of medical help down a flight of stairs and gently place them in the dinghy. Life jackets are tightened, the people are reassured that they are safe and going to a better place. And then the motor whirs into life and the dinghy takes off.

Singh directs his men to return to their original location -- where a shipment of relief material is waiting and the team will make their way back into the flooded town for a third time in 36 hours. On shift for the past ten hours, none of them knows when they will get to sleep next.