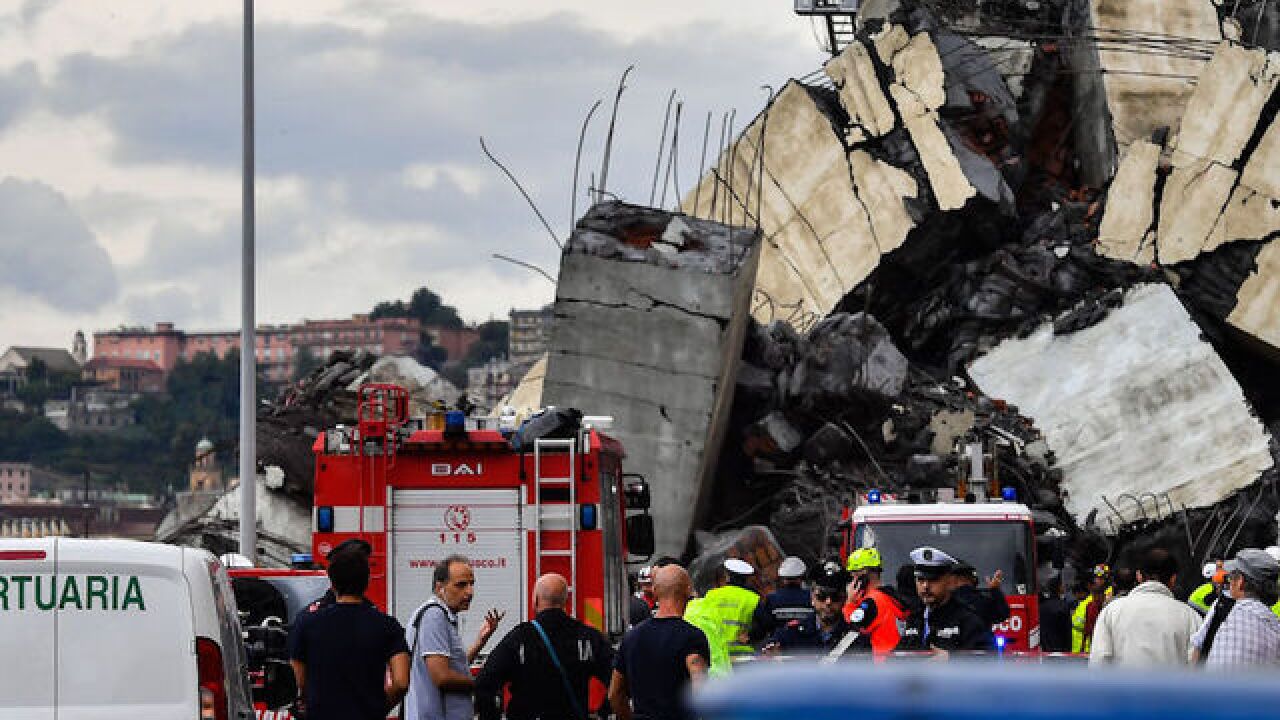 Image copyright 2018 Getty Images. All rights reserved. This material may not be published, broadcast, rewritten, or redistributed.
Paolo Rattini
<p>A general view of rescue workers near the Morandi bridge which collapsed on August 14, 2018 in Genoa, Italy. </p>

Rescuers worked through the night to attempt to account for all of the victims of Tuesday's Morandi Bridge disaster in Genoa, as Italy's President called for a "serious and severe examination" into why the bridge suddenly collapsed.

At least 36 people died when a major section of the motorway in Italy's northwest partially collapsed during a heavy storm, according to Chief of Police Col. Riccardo Sciuto. One entire family died in the accident, Sciuto added.

Three French nationals are among the dead, according to a statement released by the French Foreign Affairs Ministry on Wednesday.

The death toll is likely to rise as multiple people remain missing.

The collapse of a section of the structure early Tuesday morning sent concrete tumbling toward the ground, overturning cars and trapping people in the rubble.

Teams with dogs are aiding search-and-rescue operations, but rescuers are not hearing or seeing any signs of life, he said, adding that the situation around the bridge site is still dangerous.

The head of the Italian Civil Protection Agency, Angelo Borrelli, said about 30 vehicles and several heavy-duty trucks were on the affected section of the bridge when it gave way.

Images from the scene showed a mangled mass of buckled vehicles and slabs of bitumen torn up as the bridge, built in the late 1960s, came tumbling down. Italy's President Sergio Mattarella said rescue efforts must be followed by a "serious and severe examination of the causes of what happened."

One of the first rescuers to arrive at the site Tuesday told CNN he faced a "devastating scene," the ground littered with cars and debris, and people screaming to be freed.

"There are so many people that you don't know who to help," Paolo Tropiano said. "We even found a family -- a father, mother and a small child who were together, in a car, and unfortunately the three of them were dead."

At one point, Tropiano said he felt debris falling on his head and looked up to see part of the bridge swaying above him. "We just stood still for a second, trying to work out what could happen next," he said.

Tropiano is amazed that so many people survived the fall, and hoped others may still be found alive. "Miracles can happen," he said. "That is what we hope for, and what we are here for."

With rescue efforts continuing and authorities working to formally identify victims, the city started two days of mourning. The Italian and European Union flags will fly at half-staff on municipal buildings on Wednesday and Thursday, and residents are invited to express their condolences and support for the victims and their families, the mayor's office said.

Speaking Wednesday in St. Peter's Square in Vatican City, Pope Francis expressed his sorrow at "the tragedy that occurred yesterday in Genoa" and prayed for all those affected.

Local authorities initially cited heavy storms as partly to blame for the disaster but on Tuesday evening Italy's Prime Minister Giuseppe Conte announced that authorities were working on the theory of "structural failure."

Lauren Stewart, director of the Structural Engineering and Materials Laboratory at Georgia Tech University, told CNN that there could be issues with maintenance, explaining that there are a "huge number of bridges and infrastructure in general that's reaching this end-of-service life," as was the case with the Morandi Bridge.

"Our infrastructure is aging at a point where we have structurally deficient bridges that we know about... depending on the environment you can have components corrode.

"You can have steel corrode which can cause cracking, you can have loss of the load-bearing capacities... you can have fatigue or you can have loading and unloading -- traffic going on and off over years and years, decades even, and that can eventually degrade the structures."

The Morandi Bridge, also known as the Polcevera Viaduct, was designed by Italian civil engineer Riccardo Morandi and completed in 1968.

Maintenance was "underway to consolidate it," the company in charge of Italian highways, Autostrade, said in a statement on Tuesday.

The statement goes on to say that "a bridge-crane was installed to allow maintenance works to be carried out" adding that, "the work and status of the viaduct were subject to constant observation and supervision" by their Genoa division. "The causes for the collapse will be the subject of an in-depth analysis as soon as it is possible to safely access the site."

However, locals say that the bridge has had problems for years, and that it was often attended to by repair crews, but the fixes were never long-lasting, and many in Genoa had petitioned the authorities to replace it.

Building a new bridge could take years, however, and its importance as part of the main artery connecting the south of France and Italy meant that plans to get rid of the existing structure were postponed.

Colin Caprani, senior lecturer in structural engineering at Monash University in Melbourne, Australia, said bridges "are not set-and-forget pieces of infrastructure," arguing that as the structures age, collapses like the Morandi bridge are likely to become more common occurrences.

"Many of the bridges of the developed nations are at the end of their design lives," he said. "The increasing number of collapses we are seeing in recent years is likely to worsen as deterioration, and inspection and maintenance programs continue to have their budgets reduced."

However, he added that "bridges are the safest of all major structures -- safer than buildings and dams. The risk of fatality from a bridge collapse is around 1 in 100 million per year, which is roughly 100 times less likely than being struck by lightning.

The Morandi Bridge relied on stay-cables, which are embedded in concrete, making them difficult to inspect for corrosion.

Anil Agrawal, professor of civil engineering at the City College of New York, told CNN that if there is corrosion in the concrete, water can cause a void, further corroding the cables. And if there's no easy way to inspect them, "it's a high-risk system," Agrawal said. "If you lose any cable you have a catastrophe in the making."

That catastrophe was one that some Italian engineers had been warning about for years.

Antonio Brencich, engineer and associate professor of reinforced concrete constructions at the University of Genoa, expressed concern back in 2016.

"It was affected by serious corrosion problems related to the technology that Morandi himself had patented, which he had not used anymore, and which proved to be disastrous," Brencich told Italian daily La Repubblica.

Genoa's Mayor Marco Bucci told CNN that the bridge collapse was "not absolutely unexpected," but said that he didn't know the reason as to why, nor was he aware of the renovations.

Agrawal said that if the maintenance operation was something to do with any of the cables, it would have been a sufficient risk to have prompted many agencies in the US to close it during renovation.

In a statement on its website on Tuesday, the Genoa Mayor's office announced that traffic on some streets around the Morandi Bridge would be restricted.

Meanwhile, Italian and French authorities are coordinating to stem the flow of trucks heading into Italy to alleviate congestion caused by the bridge collapse, the Italian State Police said in a tweet on Tuesday.

Authorities are also advising residents to avoid the highways and to just use local roads for their daily activities.