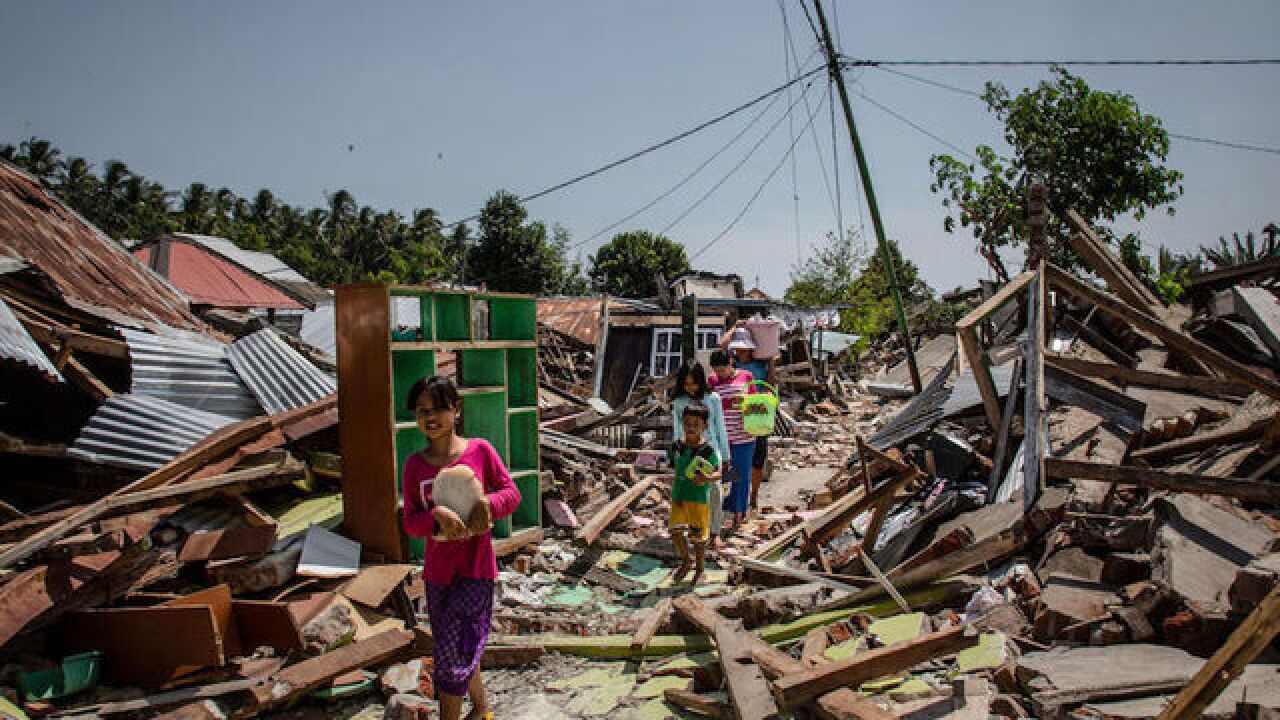 Image copyright 2018 Getty Images. All rights reserved. This material may not be published, broadcast, rewritten, or redistributed.
Ulet Ifansasti
<p>Fauzy with his children walk through the ruins of houses after searching for their belongings following the eartquake in Pemenang on August 10, 2018 in Lombok Island, Indonesia. </p>

The earthquake on the Indonesian island of Lombok killed 387 people, authorities said Saturday, increasing the death toll from the temblor seven days ago.

An additional 13,688 were injured and 378,067 people displaced, according to Indonesia's National Disaster Management Agency.

The Red Cross has said aid was struggling to reach the northern parts of the island due to debris from the quake and the ongoing risk of landslides.

"A lot of people are displaced, and many have migrated to the hilly and mountainous areas because of fear of a tsunami," Red Cross representative Husni Husni said.

Relief agencies have warned the full impact of the earthquake may take days to become known.

"We are still waiting for assessments from some of the more remote areas in the north of the island, but it is already clear that Sunday's earthquake was exceptionally destructive," said Christopher Rassi of the International Federation of Red Cross and Red Crescent Societies.

Despite the mammoth recovery efforts ahead, Indonesia's National Disaster Management Agency said Wednesday that international aid was not yet needed.

Emergency personnel raced to evacuate tourists from the islands near the epicenter of the quake on Lombok.

For residents of Lombok and surrounding islands, many saw their homes destroyed, with the collapse of roofs and walls causing the majority of casualties from the quake.

Gusti Lanang Wisnuwandana, an official with the Mataram Search and Relief Office, said rescue workers were struggling to deal with survivors terrified of being indoors after the quake.

"They are still traumatized. Most of them are not willing to stay in the building while they are undergoing (an) operation or after they have undergone (an) operation. They want to be treated outdoors," he said, adding that search and rescue work was still ongoing.