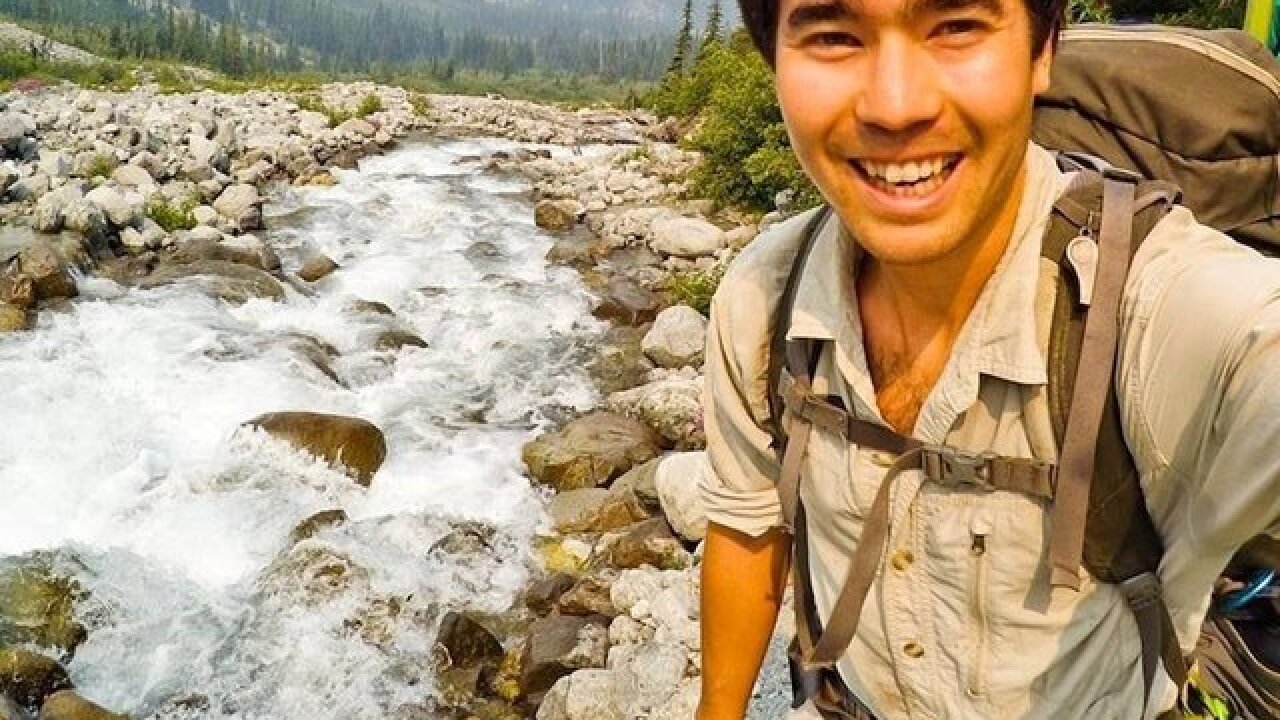 © 2018 Cable News Network, Inc.
John Allen Chau/Instagram
<p>An Instagram post of John Allen Chau, an adventurer who is believed to have traveled to a remote Indian Ocean island with the purpose of proselytizing, according to police.</p>

Authorities have started the arduous task of trying to retrieve a US missionary feared killed on a remote Indian island, careful not to trigger conflict with the islanders.

John Allen Chau was last seen last week when he traveled to the forbidden North Sentinel Island in the Bay of Bengal to try to convert the island's residents to Christianity. The Sentinelese, as they are known, have a decades-long history of repelling outsiders, a fact that is near certain to make the journey to find Chau a treacherous one.

Indian authorities along with the fishermen who reported seeing Chau's body last week, went near the island on Friday and Saturday in an effort to figure out how to recover the body.

"We have mapped the area with the help of these fishermen. We have not spotted the body yet but we roughly know the area where he is believed to be buried," said Dependra Pathak, a top police official in the Andaman and Nicobar Islands.

Pathak said the group spotted several tribe members carrying bows and arrows and walking around the area where the fishermen said they saw Chau's body being dragged and buried.

"The mission was done from a distance to avoid any potential conflict with the tribespeople as it's a sensitive zone," he said. "We are discussing with anthropologists and psychologists about the nature of the Sentinelese."

Pathak said there are a lot of things to consider before they enter the island, including the psychology of its residents.

"There are legal requirements as well which we need to keep in mind while carrying out the operation. We are also studying the 2006 case where two local fishermen were killed. The bodies were recovered then," he said.

The Sentinelese: World's most isolated tribe

The Sentinelese have lived in complete isolation on the remote North Sentinel Island for tens of thousands of years. The island, which is part of India's Andaman and Nicobar Islands territory, is roughly as large as Manhattan.

India has protected the island for decades to prevent the Sentinelese from contracting modern illnesses and to keep outsiders alive.

People are not allowed to go within five nautical miles of the island by Indian law and the Indian Navy patrols it day and night.

And while its residents have no contact with the outside world, they aren't too far from other civilizations.

The island is only about 50 kilometers (31 miles) west of Port Blair, the territory's capital known to tourists for its stunning emerald beaches, history and water sports.

At least 15 Sentinelese could be living on the island, according to India's census estimates from 2011.

He returned to his boat twice before vanishing

Traveling on a tourist visa, Chau arrived to the Andaman and Nicobar Islands in October with one mission: preach to the Sentinelese.

Indian authorities say Chau was 27, but Mat Staver, founder of a Christian ministry that Chau was involved with as a college student, gave Chau's age as 26.

He had traveled to the remote island years ago and returned knowing that his mission was illegal and risky. Still, he wanted to get to know the islanders' way of life. He hoped to eventually share the gospel and perhaps translate the Bible, said a friend, John Middleton Ramsey.

He asked a local friend, an electronic engineer, to get a boat and also recruit others -- several fishermen and a water sports expert -- who could help him.

He carefully planned his expedition and used a 13-page long journal to write his strategy, the steps he would take to reach the island and, later, some of his memories.

After he paid the fishermen around $350, police said, the group boarded "a wooded boat fitted with motors" and headed to the island on the night of November 15.

They stopped a little less than half a mile away and waited in the dark. At some point in the morning, Chau "used a canoe to reach the shore of the island," Pathak said.

He returned later that day with arrow injuries, police said.

But that did not discourage him.

He returned to the island the following day. It's unclear what happened but "the (tribespeople) broke his canoe" and he had no other option than to swim back to the boat.

On the third attempt of his mission, he didn't come back.

The fishermen said they later saw the tribespeople dragging his body around but police haven't been able to independently verify Chau's death. Authorities believe he was killed.

All seven locals who facilitated the trip have been arrested.

His diary reveals his last days

In excerpts from his journal, Chau described his time on the island and the challenges he faced. A tribesman shot at him with a bow and arrow, piercing a Bible he was carrying, he wrote in his diary, pages of which were shared by his mother with the Washington Post.

"I hollered, 'My name is John, I love you and Jesus loves you,'" he wrote. Shortly after, a young member of the tribe shot at him, according to his account.

In pages left with the fishermen who facilitated his trip to the island, his musings are a clear indication of his desire to convert the tribe.

"Lord, is this island Satan's last stronghold where none have heard or even had the chance to hear your name?" he wrote.

His notes indicate that he knew the trip was illegal, describing how the small fishing vessel transported him to the isolated island under cover of darkness, evading patrols.

"God Himself was hiding us from the Coast Guard and many patrols," he wrote.

Before he left the boat for the last time, Chau wrote one final note to his family and gave it to the fishermen.

"You guys might think I'm crazy in all this but I think it's worthwhile to declare Jesus to these people," it said. "God, I don't want to die."

"Please do not be angry at them or at God if I get killed -- rather please live your lives in obedience to whatever He has called you to and I will see you again when you pass through the veil."

Raised in Vancouver, Washington, Chau was first drawn to the outdoors after discovering a rcopy of "Robinson Crusoe" while in elementary school, he said in an article several years ago in The Outbound Collective, a website and app that helps people discover the outdoors.

He and his brother would paint their faces with wild blackberry juice and run around their backyard with bows and spears made from sticks, according to the article.

Chau graduated from Oral Roberts University, where he got involved with Covenant Journey, the Christian ministry that takes college students on immersion trips to Israel, according to Staver, who is the group's chairman.

Chau traveled to Israel with Covenant Journey, and to South Africa on missions with a group at Oral Roberts, Staver said.

In the Outward Collective article, Chau spoke of his earlier adventures, including hiking Table Mountain in Washington state on Christmas break while in college.

Chau said going back to the Andaman and Nicobar Islands was on the top of his adventure to-do list, the article said.

He's not the first one killed on the island

Chau is not the first person to fall victim to the Sentinelese after intruding on their island, which is illegal for outsiders to land on.

In 2006, members of the tribe killed two poachers who had been illegally fishing in the waters surrounding North Sentinel Island after their boat drifted ashore, according to Survival International.

In the wake of the ruinous 2004 tsunami in the Indian Ocean, a member of the group was photographed on a beach on the island, firing arrows at a helicopter sent to check on their welfare.

First contact was made by the British in the late 1800s, when, despite their attempts to hide, six individuals from the tribe were captured and taken to the main island of the Andaman Island archipelago. Two captured adults died of illness while the four children were returned -- perhaps also infected with illnesses that the islanders' immune systems were unequipped to deal with.

Anthropological expeditions were made to tribal groups in the island chain in the 1980s and 1990s, and "gift-dropping trips" continued until the mid-90s, but now all contact has ceased.

The Indian government has adopted an "'eyes-on and hands-off' policy to ensure that no poachers enter (North Sentinel Island)," according to India's Ministry of Tribal Affairs.

The Andaman Island tribe is one of the last remaining isolated groups in the world.

Jonathan Mazower of Survival International, which campaigns for the protection of isolated tribes, says there are around 100 such tribes around the world. Most are found in the Amazon rainforest but there are many in New Guinea as well as in forests and islands elsewhere.

When contact does occur, it can prove fatal -- tribespeople frequently attack intruders, and can also fall victim to common diseases like the flu, for which they have no immunity. "Often, they are very fearful of outsiders -- with very good reason," Mazower said.

"Sometimes they will have in their collective memory a massacre, a violent incident, or a disease or epidemic -- so very often, there are well-founded reasons for these tribes to not want to have anything to do" with the outside world, Mazower told CNN.

While the Sentinelese are protected by Indian laws which make it illegal to intrude on their island, most uncontacted people do not have the same fortune, their habitats instead being encroached upon by unwelcome outsiders.

"The most important challenge, by far, is to protect their land," Mazower said. "That is the absolute essential. If their lands are protected, which is their right under international law, then there is actually no reason they should not continue to survive and thrive.