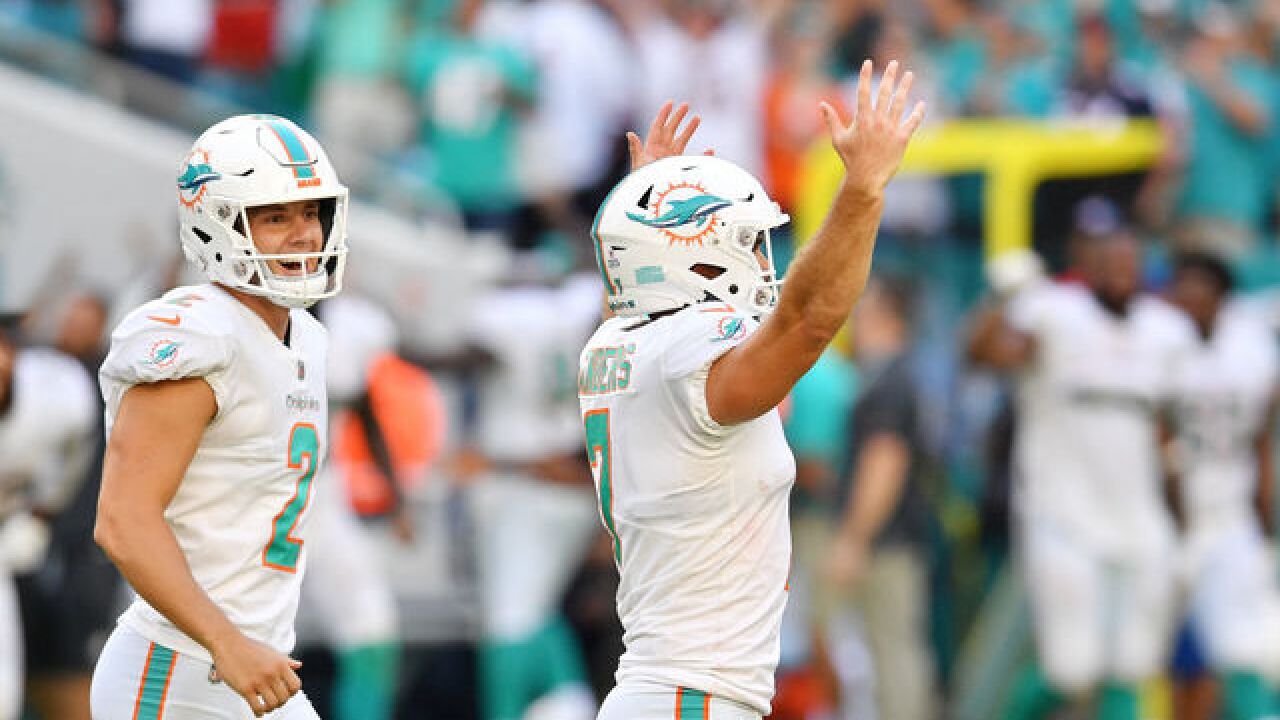 Copyright 2018 Scripps Media, Inc. All rights reserved. This material may not be published, broadcast, rewritten, or redistributed.
Mark Brown
<p>MIAMI, FL - OCTOBER 14: Jason Sanders #7 of the Miami Dolphins celebrates with Matt Haack #2 after kicking the game winning field goal against the Chicago Bears in overtime at Hard Rock Stadium on October 14, 2018 in Miami, Florida. (Photo by Mark Brown/Getty Images)</p>

MIAMI GARDENS, Fla. (AP) - Jason Sanders kicked a 47-yard field goal on the final play of overtime after Cody Parkey missed a 53-yard try for the Chicago Bears, who blew an 11-point lead in the final 16 minutes of regulation and lost to the Miami Dolphins 31-28 Sunday.

Miami's Brock Osweiler threw for 380 yards and three touchdowns subbing for Ryan Tannehill, who sat out because of an injured throwing shoulder. Albert Wilson turned two short passes into long touchdowns in the fourth quarter and finished with 155 yards on six receptions.

The Dolphins took the kickoff to start overtime, marched 74 yards and were on the verge of victory when Kenyan Drake fumbled just before crossing the goal line. Eddie Goldman recovered for the Bears, who then drove to the Miami 35.

But former Dolphin Parkey was wide right on his attempt with 2 minutes left.

The Bears' offense came alive after they trailed 7-0 at halftime. Miami then rallied from a 21-10 deficit in the final 16 minutes of regulation to tie the game twice and force overtime.

Mitchell Trubisky threw for 316 yards and three second-half touchdowns, but the Bears were hurt by two turnovers in the red zone. Jordan Howard lost a fumble at the 1, and Trubisky was intercepted in the end zone by T.J. McDonald.

Trubisky then threw a 29-yard pass to Anthony Miller for a go-ahead score late in the fourth quarter, but Miami needed only one play to tie it again, with the dynamic Wilson weaving through the secondary for a 75-yard score.

Wilson earlier scored on a 43-yard catch and run.

Chicago's Tarik Cohen scored on a 21-yard run and had a long catch and run. Kyle Fuller had two interceptions, the second of which set up a Bears touchdown.

But Miami contained the Bears' Khalil Mack, ending his streak of at least one sack and one forced fumble in every game this season.

Miami netted 541 yards without Tannehill, who had been nursing a shoulder injury for several weeks. He worked out before the game, and it was then decided he should sit.

Frank Gore rushed for 101 yards. Osweiler, who signed with Miami as a free agent in March, went 28 for 44 and overcame two interceptions.

Dolphins: Miami had two defensive ends inactive and lost Jonathan Woodard in the second quarter with a possible concussion.

Bears: CB Prince Amukamara left in the second half with a hamstring injury.

Dolphins receivers Kenny Stills and Albert Wilson kneeled during the national anthem, and defensive end Robert Quinn stood with a raised fist, as they've done at earlier games this season. No Bears demonstrated during the anthem.

Dolphins: home against Detroit next Sunday.