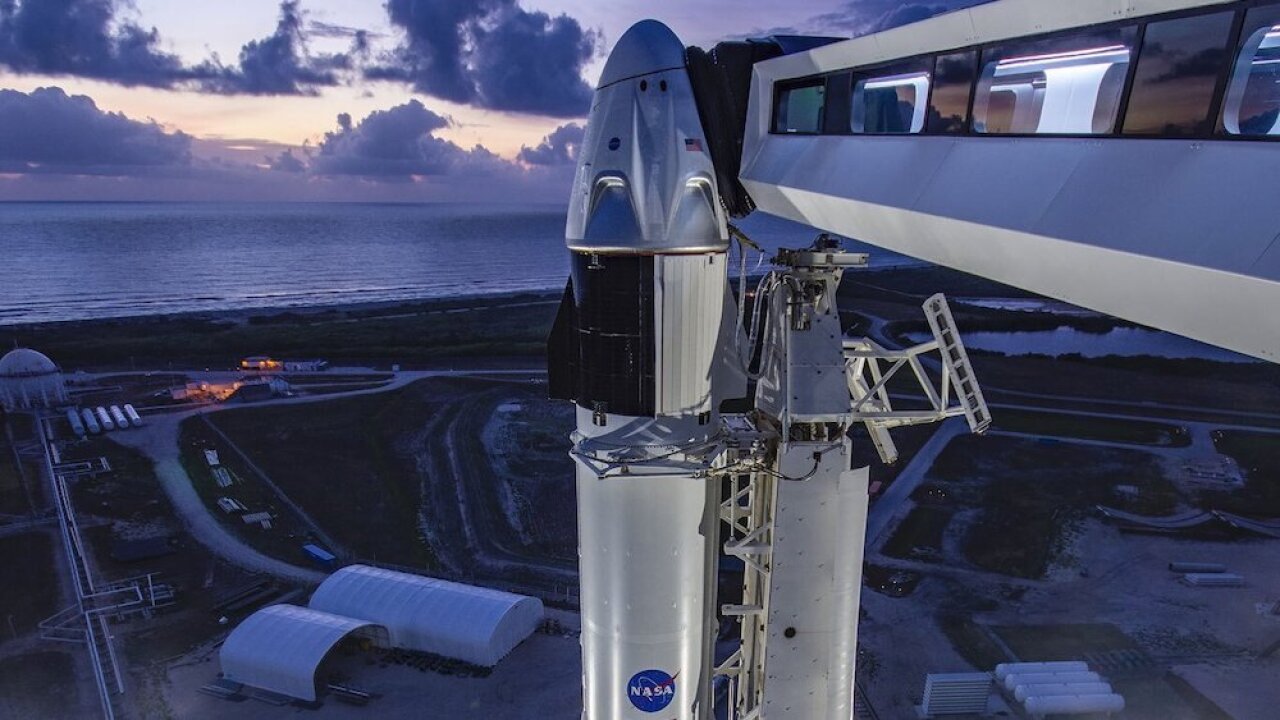 AP
In a photo provided by SpaceX, SpaceX&#39;s Dragon crew capsule sits atop a Falcon 9 rocket Sunday morning, May 24, 2020, at Cape Canaveral, Fla. SpaceX will attempt to launch NASA astronauts Doug Hurley and Bob Behnken to the International Space Station on Saturday — a first for a private company. The launch was scheduled for Wednesday, but it was postponed due to weather. (SpaceX via AP)

CAPE CANAVERAL, Fla. – NASA and SpaceX have postponed their historic launch due to inclement weather in Florida.

The launch of the Falcon 9 rocket is now scheduled to take place on Saturday, May 30 at 3:22 p.m. ET, weather permitting.

"We are not going to launch today."

Due to the weather conditions, the launch is scrubbing. Our next opportunity will be Saturday, May 30 at 3:22pm ET. Live #LaunchAmerica coverage will begin at 11am ET. pic.twitter.com/c7R1AmLLYh

On Saturday, for the first time in nine years, American astronauts will lift off from their home soil en route to space — and will do so aboard a privately-funded spacecraft.

The mission, SpaceX Demo-2, is the first test of SpaceX carrying humans into space. After launch, the astronauts will confirm the spacecraft is functioning properly during the 24-hour flight before the craft docks at the ISS.

The SpaceX craft will also carry the astronauts home, but at this point it's unclear when that will happen. NASA says it will determine how long the astronauts will stay at the ISS after they arrive. The maximum time they'll spend at the space station is between two to three months.

Watch the launch site in the player below.

The launch will mark the first time that a rocket developed by a private company will carry American astronauts into space — a milestone in the U.S.' newly-imagined space program.

In 2011, NASA ended its space shuttle program — and with it, its ability to send astronauts into space. The program had simply become too expensive for the federal government to justify paying for it. The U.S. still sent astronauts into space, but only on rockets launched in other countries, like Russia.

While NASA sought a cost-effective way to get astronauts into space, private space transportation companies like SapceX and Blue Origin began testing methods to lower the cost of space travel — including reusable rockets.

NASA and SpaceX have been launching rockets in partnership for several years, but Wednesday will mark the first time there will be humans aboard.

NASA believes that the public-private partnership will allow the agency to focus its efforts on deep space exploration. The agency is already planning on sending astronauts back to the moon, with the hopes of a return by 2024. NASA has also been exploring the possibility of sending humans to Mars — which would mark the first time in history that humans have visited a new planet.

The two astronauts involved in the mission are both NASA veterans who have flown in space before.

“After five years of every day working on this program, I think Bob and I are only two of many people ready to get this thing airborne,” Hurley said.