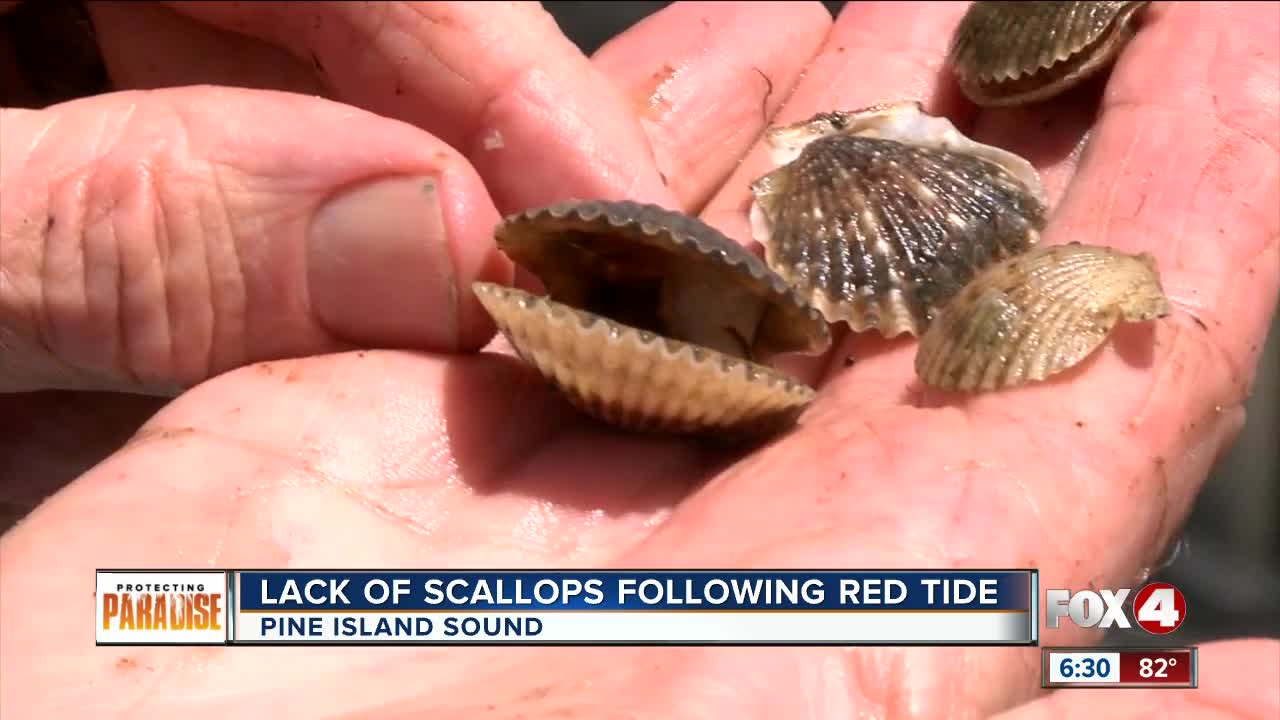 SANIBEL, Fla. — Researchers believe that a lack of bay scallops in Pine Island Sound is the result of 2018's extensive red tide bloom, which caused massive fish kills along Southwest Florida beaches that year. Saturday, dozens of volunteer snorkelers went out into the sound for the 2019 annual scallop study, and only found one scallop in a roughly 50-square-mile survey area.

"The lowest number we've ever found," said Mark Thompson of the Sanibel-Captiva Conservation Foundation. "Some years, we've found between 100 to 200 over the survey area."

The scallops have been an important food source for many species of wildlife.

"It's terrible news to hear that they only found one scallop," said James Douglass, Ph.D., a professor with Florida Gulf Coast University's Marine and Ecological Sciences department.

Douglass said that scallops help to filter pollutants from the water in which they live. But they're also sensitive to too much toxicity, which would have been brought on by the previous year's long period of red tide.

"Once the water gets more than a little bit polluted, the scallops die and they're no help at all," he said.

Douglass said that decades ago, bay scallops were so abundant in Pine Island Sound that they supported a scallop fishery. But the building of the Sanibel Causeway brought more freshwater to the briny sound, and scallop numbers dropped drastically.

He said that oysters, which are hardier than scallops, continue to help filter pollutants in Pine Island Sound.

"But scallops are really the canary in the coalmine," Douglass said. "They're the first species to go as water conditions deteriorate. We should really make scallop restoration one of our goals for Southwest Florida."

Thompson said that SCCF is trying to help that restoration, by raising scallops in cages in the shallow waters of Tarpon Bay on Sanibel. SCCF hopes to reintroduce those scallops to Pine Island Sound.

"There's always the chance that some will come back," he said. "We hope to get them going again."