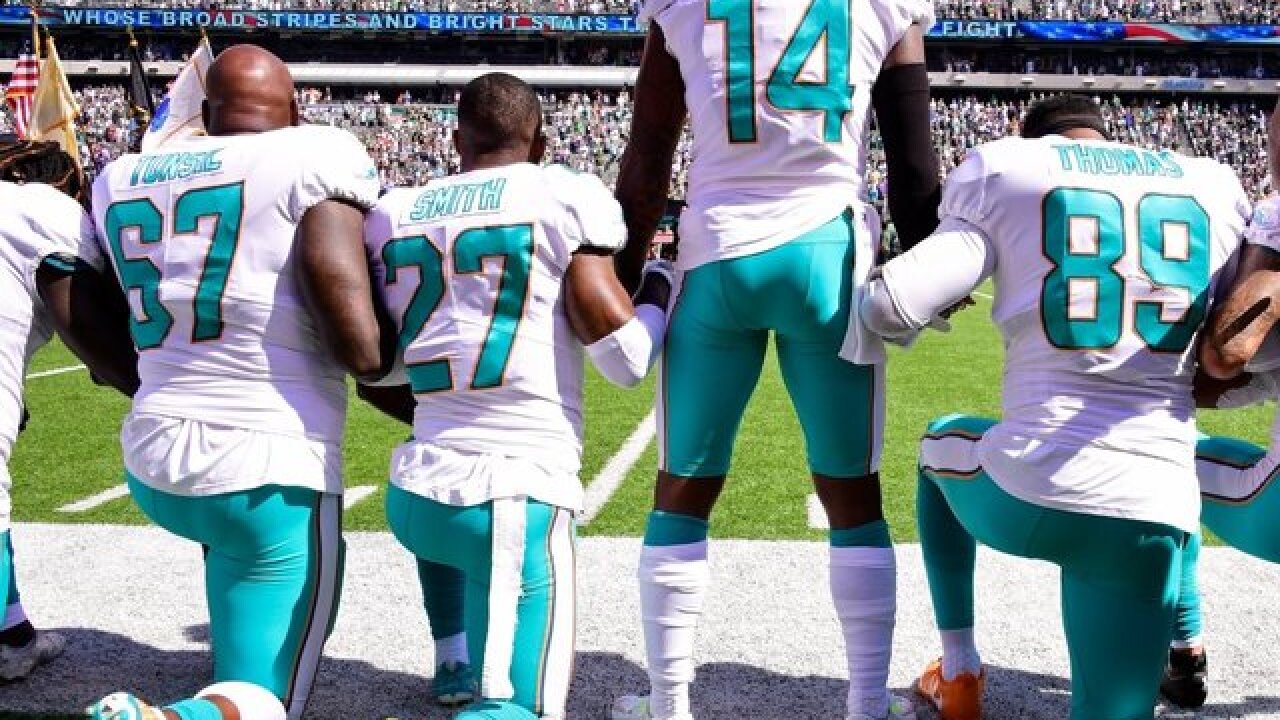 MIAMI, Fla. –  The NFL has put their national anthem policy on pause, following the Miami Dolphins proposal to suspend players for kneeling.

Miami Dolphins players who protest on the field during the national anthem could be suspended for up to four games under a team policy issued this week.

The "Proper Anthem Conduct" section is just one sentence in a nine-page discipline document provided to The Associated Press by a person familiar with the policy who insisted on anonymity because the document is not public.

It classifies anthem protests under a large list of "conduct detrimental to the club," all of which could lead to a paid or unpaid suspension, a fine or both.

The proposal would let the team fine a player a maximum of 4 games for kneeling.

Miami's anthem policy comes after the NFL decided in May that teams would be fined if players didn't stand during "The Star-Spangled Banner" while on the field.  The league left it up to teams on how to punish players. None of the team policies have been made public.

The NFL rule forbids players from sitting or taking a knee if they are on the field or sidelines during the national anthem, but allows them to stay in the locker room if they wish. The new league rules were challenged this month in a grievance by the players union.

However, the league and the union later released a joint statement saying the anthem policy, and any proposed punishments, would be put on hold.

"The NFL and NFLPA, through recent discussions, have been working on a resolution to the anthem issue. In order to allow this constructive dialogue to continue, we have come to a standstill agreement on the NFLPA's grievance and on the NFL's anthem policy. No new rules relating to the anthem will be issued or enforced for the next several weeks while these confidential discussions are ongoing.

"The NFL and NFLPA reflect the great values of America, which are repeatedly demonstrated by the many players doing extraordinary work in communities across our country to promote equality, fairness and justice.

"Our shared focus will remain on finding a solution to the anthem issue through mutual, good faith commitments, outside of litigation."