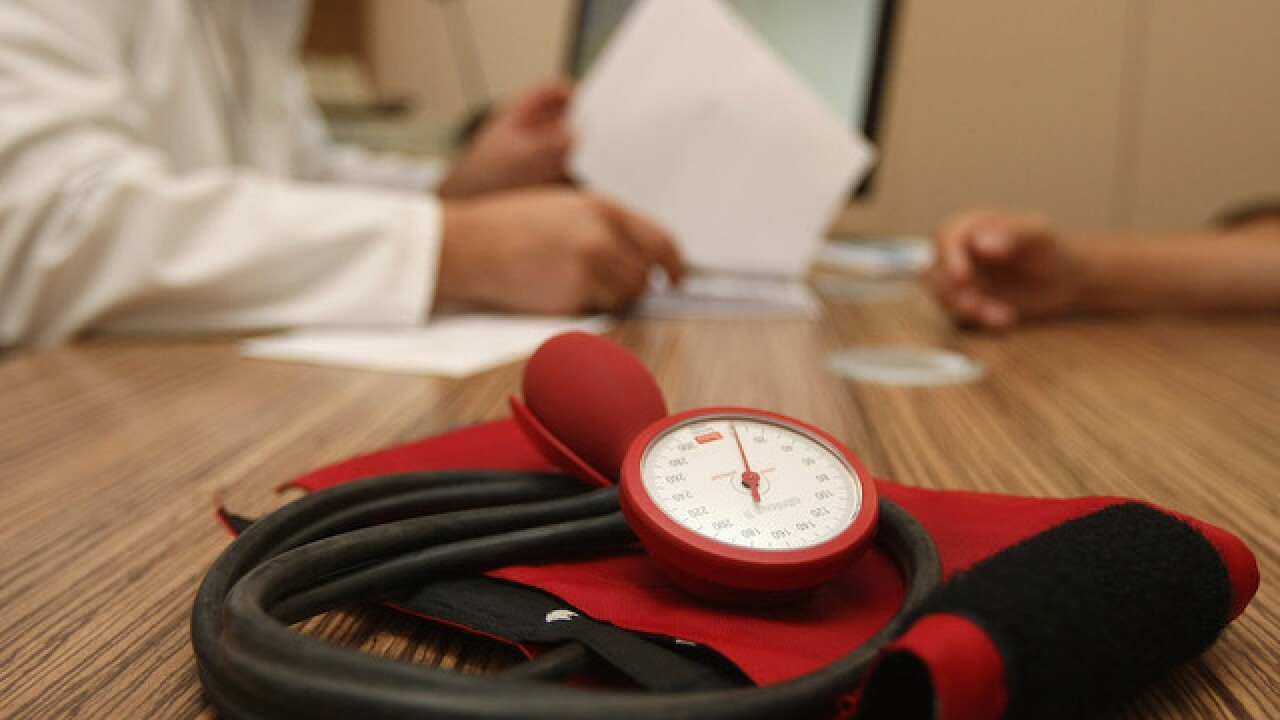 Image copyright 2012 Getty Images. All rights reserved. This material may not be published, broadcast, rewritten, or redistributed.
Adam Berry
<p>A doctor speaks to a patient as a sphygmomanometer, or blood pressure meter, lies on his desk on September 5, 2012 in Berlin, Germany. </p>

Several common drugs that contain valsartan, used to treat high blood pressure and heart failure, have been recalled in the United States due to an "impurity" in the drug that poses a potential cancer risk.

That impurity, N-nitrosodimethylamine or NDMA, is classified as a probable human carcinogen, based on results from lab tests.

The medicines included in the voluntary recall are valsartan from Major Pharmaceuticals, Solco Healthcare and Teva Pharmaceuticals Industries, as well as valsartan/hydrochlorothiazide from Solco and Teva.

The recall was updated Monday.

Valsartan is off patent and is used as a component of other generic medicines, but not all medicines containing the ingredient are involved in the recall.

The US Food and Drug Administration noted in a news release that "the presence of NDMA was unexpected" and thought to be related to changes in the way the active substance was manufactured.

"Our drug shortages team is also working hard to ensure patients' therapeutic needs are met in the United States with an adequate supply of unaffected medications," FDA Commissioner Dr. Scott Gottlieb said in the statement.

Now, the US recall has left some patients who take valsartan-containing drugs scratching their heads over what to do about their treatment regimens.

"Their biggest concern is about their risk of cancer and better understanding how concerned they should be," said Dr. Suzanne Steinbaum, director of women's cardiovascular prevention, health and wellness at Mount Sinai in New York and a spokeswoman for the American Heart Association.

"They are asking if there is any testing that should be done. Patients are now asking if they should only request 'brand-name' medication instead of generic in order to make sure that this doesn't happen. Lastly, they all want to stop the medication," Steinbaum said, noting that's not the correct action to take.

Experts offered four main takeaways for patients in the wake of the recall.

Not all valsartan drugs have the 'impurity'

In general, not all medications containing valsartan are included in the recall, because not all valsartan-containing medicines were provided the valsartan supply linked to the NDMA "impurity."

Since the recall, the external supplier linked to the problem has stopped distributing its valsartan ingredient, and the FDA has been working with the affected companies to reduce the chances of such a recall occurring in future products, according to the agency.

In the meantime, "there are other medications that contain valsartan, some in combination with amlodipine, and those do not appear to be part of the recall," said Dr. Gregory Prokopowicz, director of the Johns Hopkins Hypertension Center and assistant professor of medicine at the Johns Hopkins University School of Medicine.

Amlodipine can be used alone or in combination with other medications to treat high blood pressure and chest pain.

"It's also important to know that the medication Entresto -- that's made by Novartis that contains valsartan and sacubitril and is for heart failure -- is not affected by the recall," he said. "So patients taking that medication should not stop their medication."

The recall does not affect any Novartis or Sandoz valsartan products in the United States or any Novartis Pharma products that contain valsartan, according to a statement from the company.

Patients in the US taking those valsartan medications or Diovan, Diovan HCT, Exforge, Exforge HCT or Entresto should continue as directed by their physicians, the statement said.

The FDA noted that patients should look at the drug name and company name on the labels of their prescription bottles to determine whether their medicine has been recalled. If the information is not on the bottle, patients should call their pharmacy for those details.

"Patients taking the recalled valsartan-containing medicines should consult their doctor or pharmacist and continue taking their medicine until they have a replacement product," Steinbaum said.

"The conditions the medication treat -- heart failure and high blood pressure -- are serious, and patients could be harmed if they suddenly stop taking it without a replacement prescription," she said.

A health care professional could help provide information about other valsartan-containing products or alternative treatment options.

"There are eight drugs on the market in that category. So there's a number of drugs to which they could be switched, other than valsartan. Examples are losartan, irbesartan, olmesartan, and there are a number of others," he said. "In addition to the ARB drugs, there are many, many other blood pressure drugs that could be easily and safely substituted for valsartan, even outside of that category. So it varies from patient to patient."

Those patients who have switched to a different drug should monitor their blood pressure closely, said Dr. Erin Michos, an associate professor and associate director of preventive cardiology at Johns Hopkins Medicine.

"It is possible their blood pressure might respond differently to the new medication and doses might need to be adjusted under the guidance of their health care provider," said Michos, whose own patients have been asking her about the valsartan recall.

"Whenever changing or adjusting new blood pressure medications, I recommend that patients keep a log with their blood pressure numbers and time of day the measurement was taken, and share this log with their health care provider to review and make adjustments," she said. "I am mostly just switching my patients off valsartan to another ARB; that is the easiest solution."

What is the valsartan cancer risk?

As of now, the long-term risks posed by the NDMA found in certain valsartan-containing drugs remain somewhat unknown, and the amount of NDMA consumed would play a role in those risks, Michos said.

In other words, "the dose makes the poison," she said.

"What we know about the dangers of this impurity comes primarily from laboratory studies. It is a toxin that can affect the liver and cause liver fibrosis or scarring and liver tumors in rats. So it is assumed to be toxic to humans, as well," Michos said.

"In these animal studies, they usually give large quantities, so again, the risk is likely not the same equivalent in humans," she said.

NDMA, an organic chemical that forms in both industrial and natural processes, has been used to make liquid rocket fuel, softeners and lubricants, among other products. It can also be unintentionally produced through certain chemical reactions and is a byproduct from some pesticide manufacturing, the making of rubber tires or fish processing.

Exposure to high levels of NDMA may cause liver damage in humans, according to the US Environmental Protection Agency.

"I definitely am switching my patients off this medication if supplied by one of the affected companies," Michos said. "I am certainly concerned, but I think it is too soon to panic. This recall is a precaution for safety."

To put the recall in perspective, Dr. Howard Weintraub, a cardiologist and professor of medicine at NYU Langone Health, said that he told his patients about a meta-analysis study on angiotensin receptor blockers in general and cancer risk.

That study, published in the journal Medicine in 2016, involved analyzing data from 19 randomized controlled trials including 148,334 patients.

"Looking at all of those trials that were conducted with a variety of these medications within the ARB family, there was no hint of a cancer risk," said Weintraub, who was not involved in the study.

"It was a very well-done analysis of older trials, and there was no ambiguity that there was not a signal of cancer risk," he said.

'Taking medicines is not a substitute for a good lifestyle'

Overall, the conversation around valsartan-containing medications is a reminder for patients to be mindful of maintaining healthy habits along with their medication regimen, Weintraub said.

It's important to continue taking prescriptions provided by your doctor, but "taking medicines is not a substitute for a good lifestyle," he said.

"You and your health care physician or practitioner should work together on making sure that you keep an eye on your weight. Keep an eye on your diet, particularly your salt intake, and try to exercise regularly," he said. "Each of those individually and together can have a significant impact on your blood pressure."