UK PM May says she will leave by 2022 election 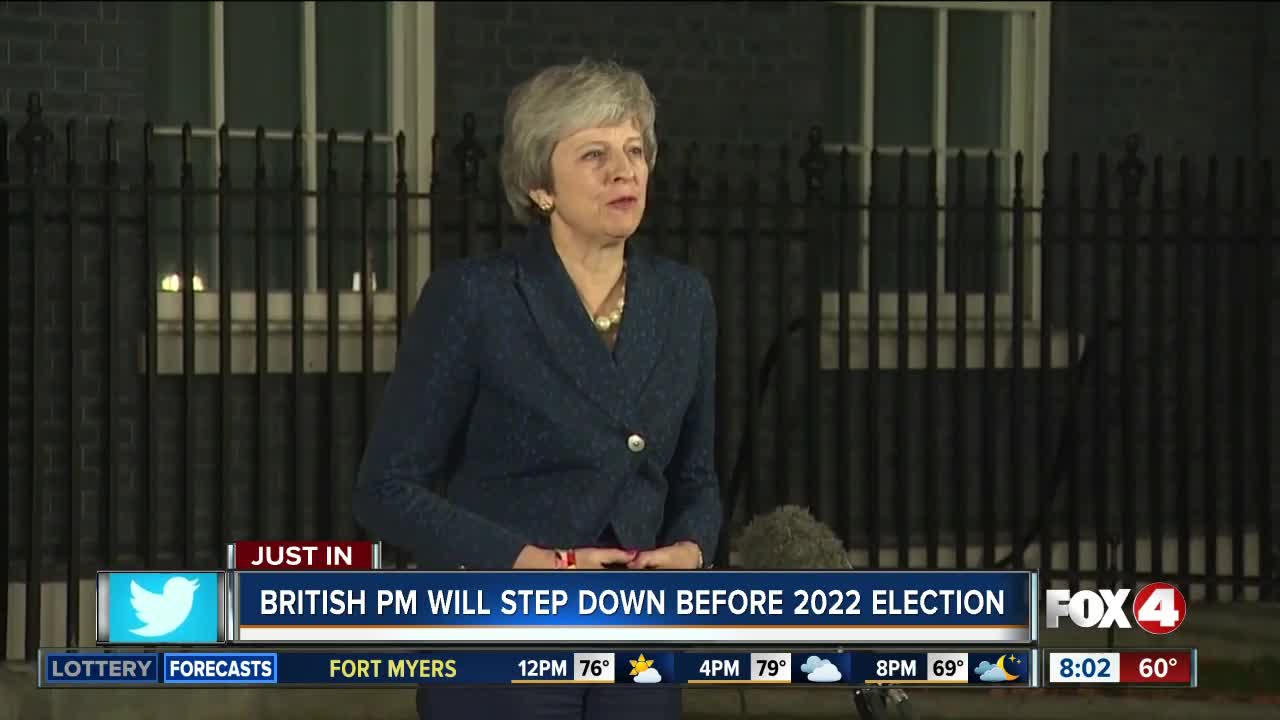 British Prime Minister Theresa May has confirmed that she will step down before the country holds its next scheduled national election in 2022. 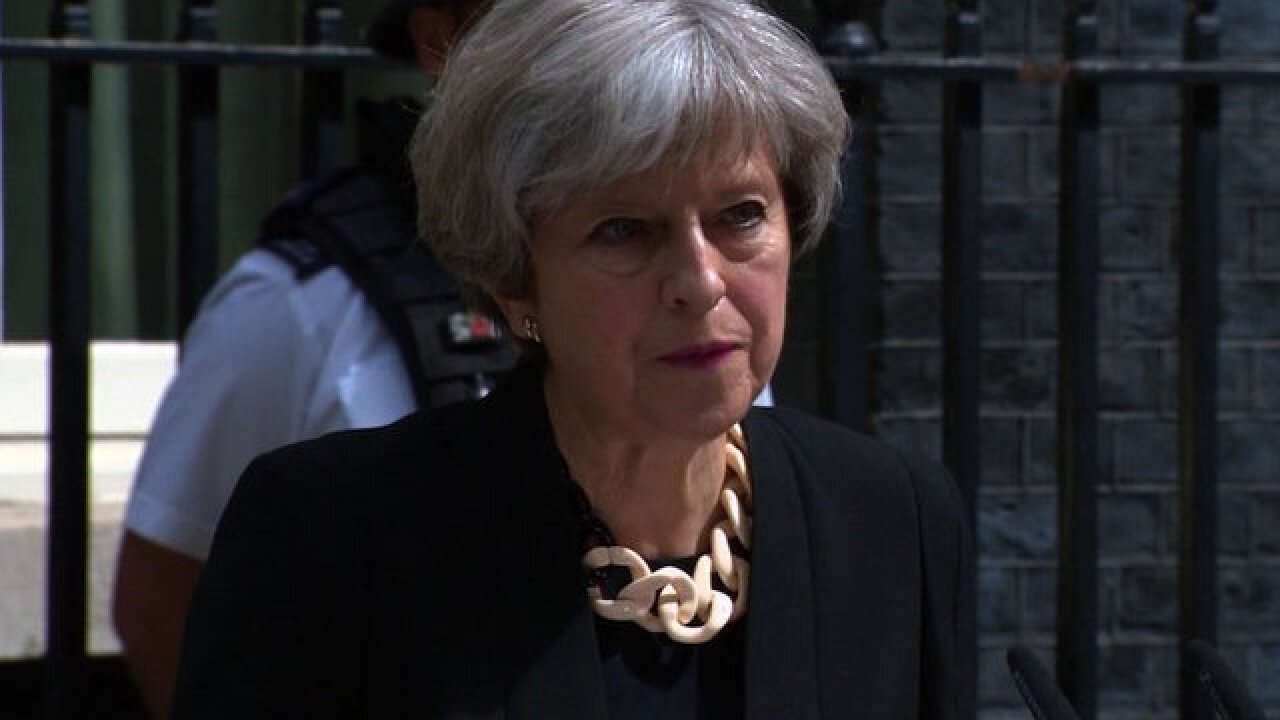 LONDON (AP) - The Latest on Brexit (all times local):

British Prime Minister Theresa May has confirmed that she will step down before the country holds its next scheduled national election in 2022.

Arriving at an EU summit in Brussels on Thursday, May said "I think it is right that another party leader takes us into that general election."

Late Wednesday May survived a no-confidence vote among her Conservative Party lawmakers, triggered by unhappiness in the party at the way she is handling Brexit.

She secured victory by 200 votes to 117 after telling lawmakers at a private meeting that she would hand over power to another Conservative leader before the next election.

But May has not said what she will do if, as many expect, Britain faces an early national election triggered by divisions over Brexit.

British lawmakers won't be voting next week on Theresa May's deal with the European Union for leaving the bloc.

The leader of the House of Commons, Andrea Leadsom, published a list of government business for next week - and there was no mention of the so-called meaningful vote on the Brexit bill.

Earlier this week, May postponed the vote on the deal after realizing she was heading for a heavy defeat. The vote is now likely to be held next year, when Parliament returns from its Christmas break.

Britain is due to leave the EU on March 29.

The German parliament has approved a motion stating that the Brexit deal can't be renegotiated, underlining the stance of the government and European Union allies.

The largely symbolic motion was approved hours before Chancellor Angela Merkel and the other 27 EU leaders gather in Brussels.

British Prime Minister Theresa May is seeking reassurances about the withdrawal deal, which she is struggling to sell to skeptical lawmakers.

The German motion states that "there will not be an agreement that is better and fairer for both sides. Any hope that a rejection of the agreement could lead to its renegotiation must prove to be illusory."

It adds: "It must be clear to all that the finely balanced overall package cannot be undone again."

May arrived in a sealed-off area where no cameras were allowed, a few hours before Thursday's EU summit where she is seeking support from her European partners to help sell the Brexit deal to the U.K. Parliament.

Tusk, who is chairing the summit in Brussels, tweeted that he is meeting May separately "for last-minute talks."

EU leaders insist that the Brexit deal she has reached with them is the only one possible and that it cannot be reopened. However, they have said they are willing to clarify elements of the agreement and provide reassurances about how it would work.

Germany's main business lobby group says it's up to the British government "not to waste any more time" and to secure an orderly exit from the European Union.

The Federation of German Industries placed responsibility for avoiding a no-deal Brexit squarely on London.

In a statement, the group's director general, Joachim Lang, appealed to "those responsible in London to organize a majority to avert a hard Brexit as soon as possible."

Otherwise, he said companies "will have to press ahead with implementing the necessary emergency measures for a disorderly withdrawal of the United Kingdom from the EU."

Lang said the withdrawal agreement Prime Minister Theresa May is struggling to sell in Britain "will help limit the damage on both sides of the Channel."

The pound has advanced further after British Prime Minister Theresa May won a confidence vote among lawmakers from within her Conservative Party.

The currency, which slumped earlier in the week to 20-month lows after May pulled a vote on her Brexit divorce deal with the European Union, has recovered ground since it became clear would win the confidence vote and that she would not face another one from her own party in the next year.

Traders think that means she may have more room for manoeuver in her dealings with Parliament that could mean Britain ends up having close economic ties with the EU after Brexit officially happens in March.

Michael Hewson, chief market analyst at CMC Markets, also said the defeat of her opponents in Conservative Party suggests that the "risks of a 'no-deal' Brexit may well have receded."

Germany's foreign minister says he's relieved that Britain's governing party stopped short of creating "total chaos" in the Brexit process, but is indicating that he still sees little chance of substantial concessions to London on its European Union divorce deal.

Prime Minister Theresa May is expected at an EU summit Thursday after surviving a confidence vote by her party's lawmakers, many of whom loathe the agreement. German Foreign Minister Heiko Maas told Deutschlandfunk radio that "we now have another chance with Theresa May of her ... getting a majority for this accord, which is a compromise between both sides."

Asked what could be done to secure British approval without renegotiation or legal changes, Maas replied: "Ultimately the British have to tell us that because, if there are proposals from Brussels now, no one can tell given the confusion in London whether it is enough to get a majority in the House of Commons."

British Prime Minister Theresa May is seeking a lifeline from European Union leaders after winning a no-confidence vote triggered by Conservative lawmakers unhappy with her Brexit plan.

May will ask the 27 other EU leaders at a Brussels summit Thursday for reassurances about the Brexit divorce deal that she can use to win over a skeptical British Parliament. The British leader scrapped a planned vote on the deal this week when it became clear she would lose.

The bloc is adamant there can be no substantive changes to the legally-binding withdrawal agreement.

On Wednesday evening, May survived a vote on her leadership from Conservative lawmakers by 200-117. The victory gives her a reprieve from domestic pressure but the size of the rebellion underscores the unpopularity of her Brexit plan.