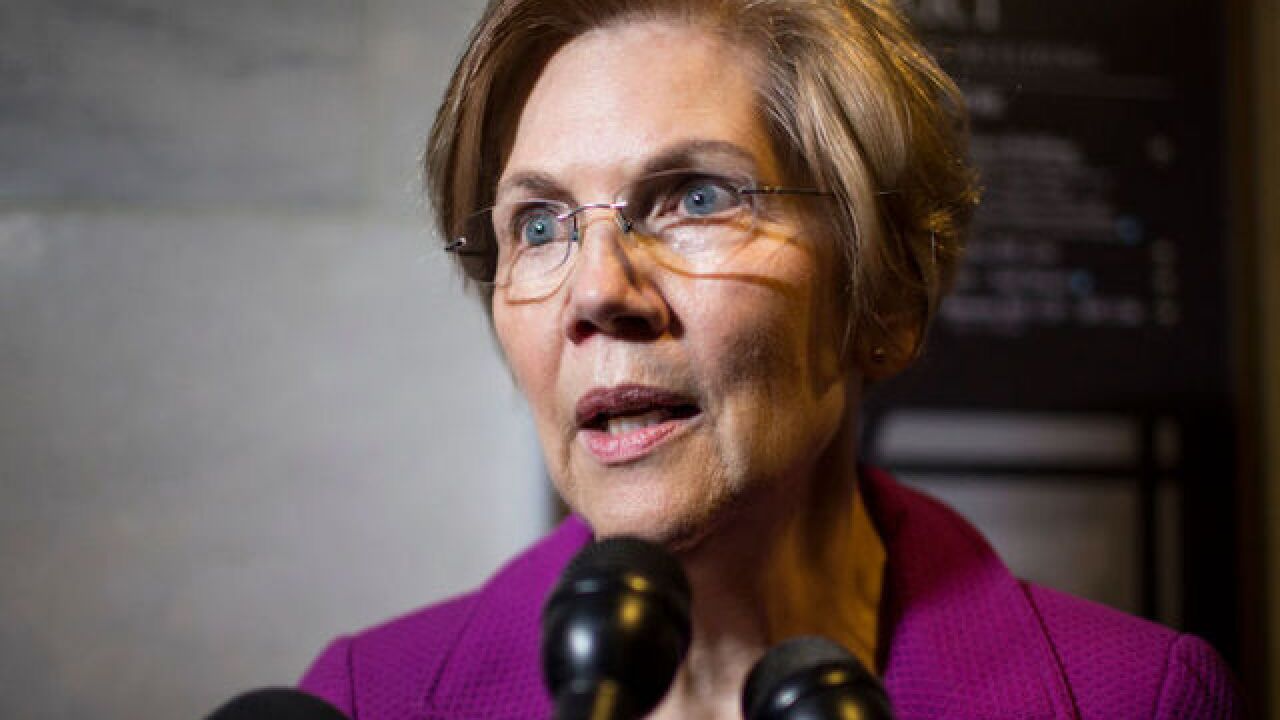 Image copyright 2018 Getty Images. All rights reserved. This material may not be published, broadcast, rewritten, or redistributed.
Zach Gibson
<p>Sen. Elizabeth Warren (D-MA) speaks to members of the press during a demonstration against Supreme Court Nominee Brett Kavanaugh in the Hart Senate Office Building on September 27, 2018 in Washington, DC. </p>

President Donald Trump revived Tuesday his "Pocahontas" nickname for Elizabeth Warren, a day after the Massachusetts senator released a DNA test amplifying the controversy over her claimed Native American heritage.

"Pocahontas (the bad version), sometimes referred to as Elizabeth Warren, is getting slammed," Trump tweeted of his potential 2020 challenger.

"She took a bogus DNA test and it showed that she may be 1/1024, far less than the average American. Now Cherokee Nation denies her, "DNA test is useless." Even they don't want her. Phony!" Trump said.

Pocahontas was a historical figure from the 17th Century and using her name in an intentionally disparaging way insults native peoples and degrades their cultures. The largest Native American advocacy group has said that is why it has condemned the President's usage in this manner.

In a second tweet moments later, Trump alleged that Warren's claims of Native American heritage "have turned out to be a scam and a lie" and called for Warren to apologize for the second time in 24 hours.

But Warren now has documentation to back up her family lore -- an analysis of her genetic data performed by Carlos Bustamante, a professor of genetics at Stanford and adviser to Ancestry and 23 and Me.

Bustamante's full report is now posted on Warren's website, along with other supporting documents and interviews detailing her background.

According to the report, "the great majority of (Warren's) identifiable ancestry is European." However, the report adds, "The analysis also identified 5 genetic segments as Native American in origin at high confidence."

"The identity of the sample donor, Elizabeth Warren, was not known to the analyst during the time the work was performed," the report said.

What counts as Native American heritage is a question with different answers among the 573 legally recognized tribes in the United States.

Cherokee Nation Secretary of State Chuck Hoskin Jr. released a statement Monday saying using a DNA test to claim a connection to any tribal nation is "inappropriate and wrong."

"It makes a mockery out of DNA tests and its legitimate uses while also dishonoring legitimate tribal governments and their citizens, whose ancestors are well documented and whose heritage is proven," he said. "Senator Warren is undermining tribal interests with her continued claims of tribal heritage."

Trump thanked the Cherokee Nation on Twitter Tuesday for "revealing that Elizabeth Warren, sometimes referred to as Pocahontas, is a complete and total Fraud!"

Trump's nickname for Warren is among his most frequently used monikers. The President most notoriously referred to Warren as Pocahontas at an official White House event honoring veteran Navajo code talkers.

On Monday Trump claimed that he "didn't say" that he would pay $1 million to Democratic Sen. Elizabeth Warren for taking DNA test to review her Native American heritage.

"Who cares?" Trump initially said when first asked about the DNA test. When pressed on the once-promised $1 million payment, Trump responded: "I didn't say that. You better read it again."

In fact, Trump did promise $1 million, during a July rally, but only if the test showed she was "an Indian."

At a rally in July, Trump said: "And we will say, 'I will give you a million dollars, paid for by Trump, to your favorite charity if you take the test and it shows you're an Indian ... we'll see what she does. I have a feeling she will say no but we will hold it for the debates."

Later Monday, Trump said he did not owe Warren the money, saying that was contingent on her winning the nomination.

"If she gets the nomination in the debate where I was going to have her tested," Trump said.

"I'll only do it if I can test her personally," he said. "This is not something I would enjoy doing either."