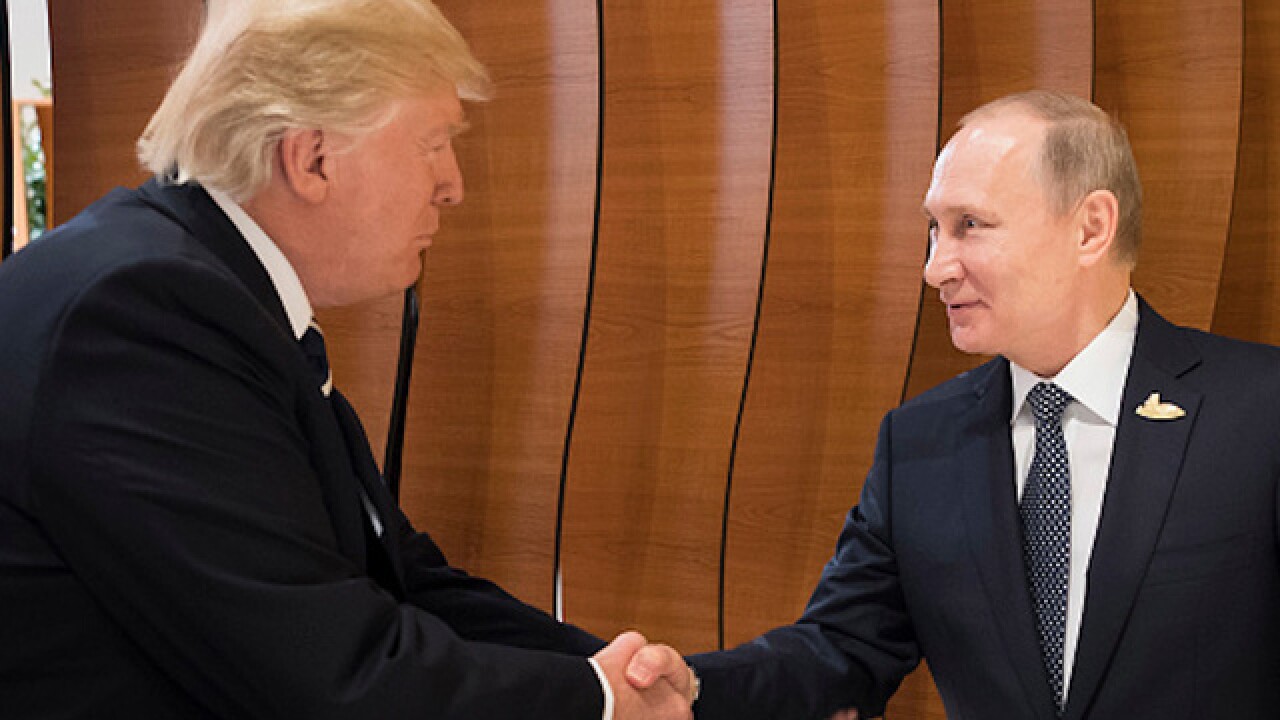 Image copyright 2018 Getty Images. All rights reserved. This material may not be published, broadcast, rewritten, or redistributed.
Handout
<p>HAMBURG, GERMANY - JULY 07: In this photo provided by the German Government Press Office (BPA) Donald Trump, President of the USA (left), meets Vladimir Putin, President of Russia (right), at the opening of the G20 summit on July 7, 2017 in Hamburg, Germany. The G20 group of nations are meeting July 7-8 and major topics will include climate change and migration. (Photo by Steffen Kugler /BPA via Getty Images)</p>

President Donald Trump continues to cast doubt on US intelligence assessments that Russia meddled in the 2016 presidential contest, just as the White House announced that he and Russian President Vladimir Putin will meet in Helsinki on July 16.

"Russia continues to say they had nothing to do with Meddling in our Election!" Trump wrote on Twitter Thursday morning. He went on to question why US law enforcement agencies weren't investigating other perceived influences on the election, which he has repeatedly said was rigged for his opponent Hillary Clinton.

"Where is the DNC Server, and why didn't Shady James Comey and the now disgraced FBI agents take and closely examine it? Why isn't Hillary/Russia being looked at? So many questions, so much corruption!" he wrote.

US intelligence agencies concluded in a January 2017 report that Russia sought to influence the presidential election in Trump's favor.

"We further assess Putin and the Russian Government developed a clear preference for President-elect Trump," the report read.

Two agencies — the CIA and the FBI — came to that assessment with "high confidence." Another, the National Security Agency, arrived at that conclusion with "moderate confidence."

Trump has downplayed those conclusions previously, saying he takes Putin at his word when he says Moscow did not attempt to influence the election.

He's due to meet face-to-face with Putin on July 16 in Helsinki. The talks are likely to draw criticism from the US President's domestic critics, who accuse him of currying favor with Putin after Russia.

Speaking in Moscow on Wednesday, US national security adviser John Bolton said Trump would likely raise the election meddling issue during his sit-down with Putin. Bolton himself addressed it during his own meeting with Putin this week.

And he brushed aside suggestions that a Trump-Putin meeting would amount to conciliation from a President who intelligence agencies assess was favored by the Russian government.

"I think a lot of people have said or implied over time that a meeting between President Trump and President Putin somehow proves some nexus between the Trump campaign and the Kremlin, which is complete nonsense," Bolton said in Moscow.

"Make no mistake, President Trump agrees Russia interfering in our election is something they simply cannot do," Pompeo said, referring to the midterm elections. "I don't think he would take any umbrage with that."

Trump himself has been committal. Asked in the Oval Office on Wednesday whether election meddling would arise in his talks with Putin, Trump turned to his Portuguese counterpart and said: "You never know with meetings, right? But I think a lot of good things can come from meetings with people."