Synagogue shooting 'will not break us. It will not ruin us,' rabbi says at vigil 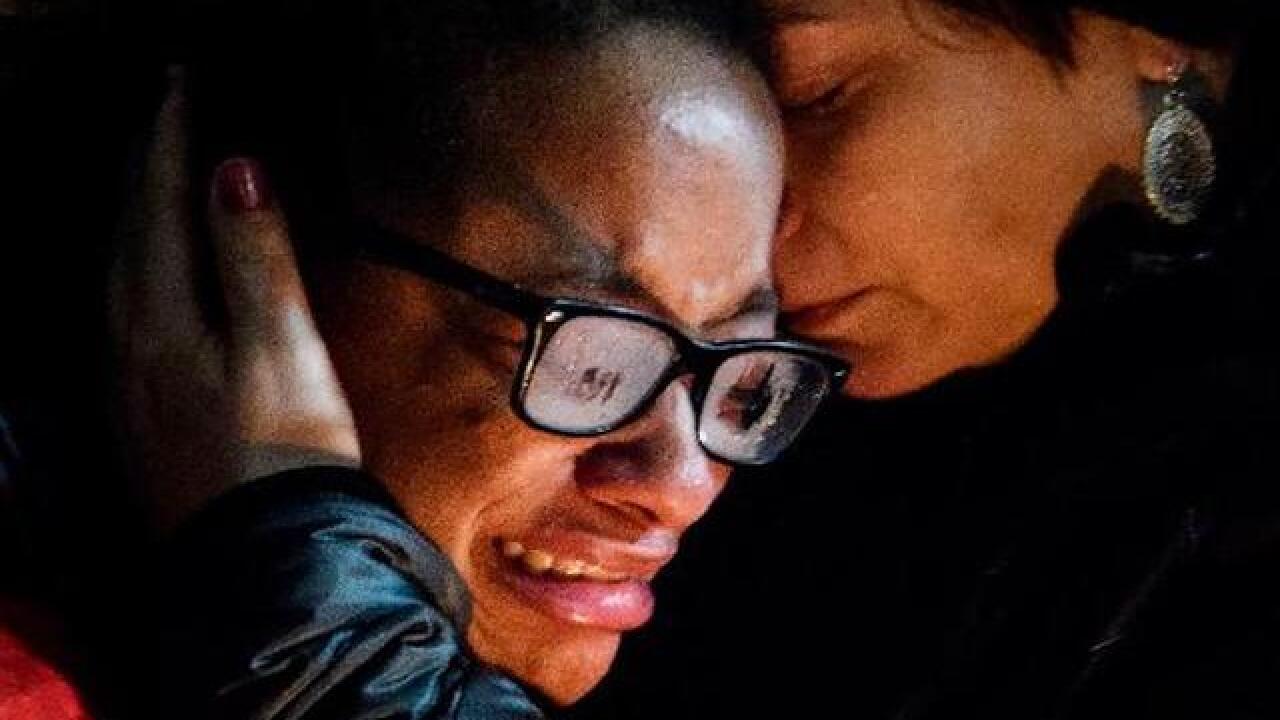 The day after a gunman who spewed anti-Semitic rhetoric allegedly killed 11 congregants in a Pittsburgh synagogue, thousands mourned the dead, said their names out loud and proclaimed that hate wasn't welcome in their city.

The crowd at the Jewish Family and Community Services of Pittsburgh's interfaith gathering and vigil spilled out of the Soldiers & Sailors Memorial Hall & Museum. Many stood in the drizzle outside during the ceremony.

Less than two miles away, agents filed in and out of the site of the massacre: Tree of Life Synagogue, which houses three congregations. Authorities said Robert Bowers stormed the building early Saturday and killed the congregants gathered for Shabbat services in what the Anti-Defamation League has called the deadliest attack on the Jewish community in US history.

At Sunday's service, the rabbis of the three congregations embraced after tearful tributes. Christian and Muslim leaders pledged to stand with members of the Jewish community.

"What happened yesterday will not break us. It will not ruin us," said a tearful Rabbi Jonathan Perlman, leader of New Light Congregation, which worshiped in the synagogue. "We will continue to thrive and sing and workshop and learn together."

As Pittsburgh mourns in the coming months, Mayor William Peduto said the city will need to support the Jewish community and reject anti-Semitism.

"We will be a city of compassion welcoming to all people, no matter your religion of where you family came from on this earth or your status."

He said the citizens of Pittsburgh are tough and proud of their blue-collar roots. "We will drive anti-Semitism and the hate of any people back to the basement, on their computer and away from the open discussions and dialogues around this city, around this state and around this country."

On Sunday, authorities released the names of the dead. They included a spry nonagenarian, two brothers and a family physician remembered for the bow-ties he wore and the care he provided, often to multiple generations of the same families.

Israeli Diaspora Affairs Minister Naftali Bennett attended the ceremony in Pittsburgh, and said the names of the victims out loud.

"Eleven souls. Eleven innocent lives brutally cut short. We stand here in your memories," said Bennett, who took a flight from Israel on Saturday night after the shooting.

Rabbi Cheryl Klein of Dor Hadash, also housed in the synagogue, said the physician, Dr. Jerry Rabinowitz, 66, was a member of the congregation. She called him a "leader, a healer and a voice of reason."

Klein said she would have been in the synagogue during the shooting if she wasn't out of town celebrating Shabbat with her family.

"We are shaken, sickened and suffering -- not just by our own tragedy of loss and injury, but for all those who share the Tree of Life building," Klein said.

Rabbi Jeffrey Myers, leader of the Tree of Life congregation, was in the building when the service started at 9:45 a.m., and there were 12 people in the sanctuary.

Less than 10 minutes later, 911 calls poured into the Allegheny County Emergency Operations Center, according to authorities.

He said he was the only one of those gathered who survived.

"My holy place has been defiled," Myers said. "We will rebuild."

'It's made me want to be more aggressively Jewish'

The attack rattled the small Jewish community of Squirrel Hill, where many families have attended the same synagogue for generations.

"It's made me want to be more aggressively Jewish," Susan Blackman, who was one of Rabinowitz's patients, told CNN. "To wear my Star of David in every day ... It's not optional now."

She touched the Star of David around her neck.

Blackman said the attack has made her feel scared. "But I'm kind of always scared."

'We will cry with you'

In November 2017, a gunman opened fire on a church in Sutherland Springs, Texas, killing 25 people and an unborn child and wounding 20 others. And in June 2017, self-described white supremacist Dylann Roof killed nine people inside the Emanuel African Methodist Episcopal Church, in Charleston, South Carolina.

Rev. Liddy Barlow, the executive minister of Christian Associates of Southwest Pennsylvania, said Jewish communities have supported Christians in their time of grief.

"When violence came to Christian sanctuaries of Mother Emanuel in Charleston, of Sutherland Springs in Texas, you stood with us," Barlow said. "We will cry with you. We will resist anti-Semitism and all hatred with you and we will work with you to end violence."

For weeks before Saturday's shooting, Bowers, the suspected shooter, frequently targeted Jews in his posts on Gab, a social media platform that bills itself as "the free speech social network." Bowers used anti-Semitic slurs, complained that President Trump was surrounded by too many Jewish people and blamed Jews for the migrant caravans in Central America.

Gab has denied any support for violence and said its mission is "to defend free expression and individual liberty online for all people." The company said it backed up the suspect's profile data, suspended the account and contacted the FBI.

Bowers faces 29 federal charges, some of which are punishable by death. The 46-year-old resident of Baldwin, Pennsylvania, a Pittsburgh suburb, is scheduled to make his first appearance in court on Monday.

Near the Tree of Life, mourners brought flowers for a memorial. Some brought a Star of David with the name of the victims.

Deborah Friedman, another one of Rabinowitz's patients, recalled how the Dor Hadash congregation was like a second home for him. She learned of his death at the vigil Saturday night, before officials released the names of victims.

When she spoke about Rabinowitz on Sunday, she started to speak in the present tense, but quickly stopped herself.

"He was a wonderful guy," she said.