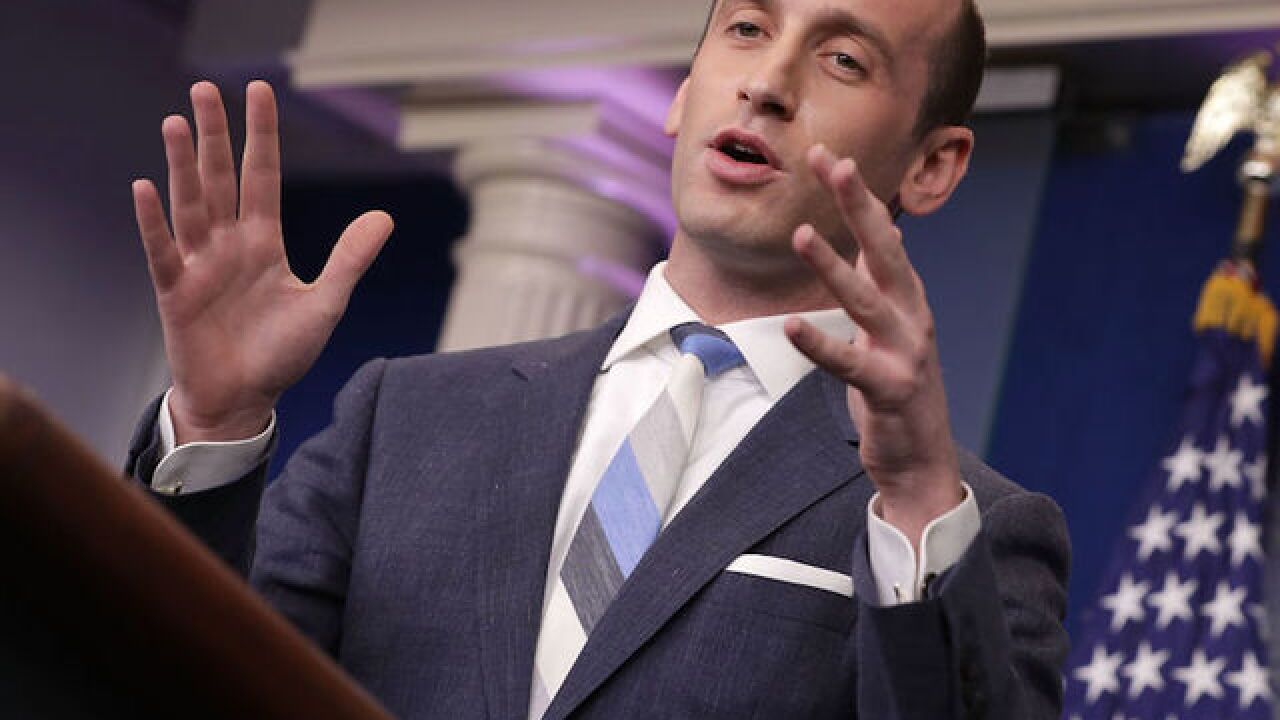 Image copyright 2018 Getty Images. All rights reserved. This material may not be published, broadcast, rewritten, or redistributed.
Chip Somodevilla
<p>Senior Advisor to the President for Policy Stephen Miller talks to reporters about President Donald Trump's support for creating a 'merit-based immigration system' in the James Brady Press Briefing Room at the White House August 2, 2017 in Washington, DC. </p>

White House adviser Stephen Miller is pushing to expedite a policy that could penalize legal immigrants whose families receive public benefits and make it more difficult to get citizenship, three sources familiar with the matter tell CNN.

The White House has been reviewing the proposal since March at the Office of Management and Budget, which is the last stop for regulations before they are final. But concerns over potential lawsuits have delayed the final rule, and the draft has undergone numerous revisions, multiple sources say.

The crux of the proposal would penalize legal immigrants if they or their family members have used government benefits -- defined widely in previous drafts of the policy.

The law has long allowed authorities to reject immigrants if they are likely to become a "public charge" -- or dependent on government. But the draft rule in its recent forms would include programs as expansive as health care subsidies under the Affordable Care Act, as well as some forms of Medicaid, the Children's Health Insurance Program, food stamps and the Earned Income Tax Credit.

The rule would not explicitly prohibit immigrants or their families from accepting benefits. Rather, it authorizes the officers who evaluate their applications for things like green cards and residency visas to count the use of these programs against applicants and gives them authority to deny visas on these grounds -- even if the program was used by a family member.

Two non-administration sources close to US Citizenship and Immigration Services, which would publish and enforce the proposal, say that Miller has been unhappy by the delay and has pushed the agency to finish it quickly. The sources say Miller even instructed the agency to prioritize finalizing the rule over other efforts a few weeks ago.

Miller is an immigration hardliner within the administration, a veteran of Attorney General Jeff Sessions' Senate office who has been at President Donald Trump's side since the early stages of his presidential campaign.

But two other administration sources downplayed the idea of any instructions to defer other policies until it's done, though they acknowledged Miller is keenly interested in the rule.

The White House and Department of Homeland Security did not respond to a request for comment.

"The administration is committed to enforcing existing immigration law, which is clearly intended to protect the American taxpayer," Houlton said. "Any potential changes to the rule would be in keeping with the letter and spirit of the law -- as well as the reasonable expectations of the American people for the government to be good stewards of taxpayer funds."

In one illustration of how many avenues there may be to challenge the complex rule, it was sent over to the Office of Management and Budget designated as not "economically significant" despite the possible impact to millions of immigrants and federal spending.

Executive director of the pro-immigration group America's Voice Frank Sharry alleged that Trump and Miller are using a "deeply cynical and cruel strategy" and accused Republicans of "race-baiting."

"Trump and Miller have concluded that the best 2018 political strategy is a divisive and desperate three-step: 1) do something cruel to immigrants; 2) sit back as Democrats, the fact-based media and the majority of Americans denounce the cruelty; 3) step in and claim that the President is standing up for his white base and against 'the other' while working to define Democrats as doing the opposite," Sharry said. "They did this on DACA. They did this on family separation. Now they are planning to do the same on public charge."